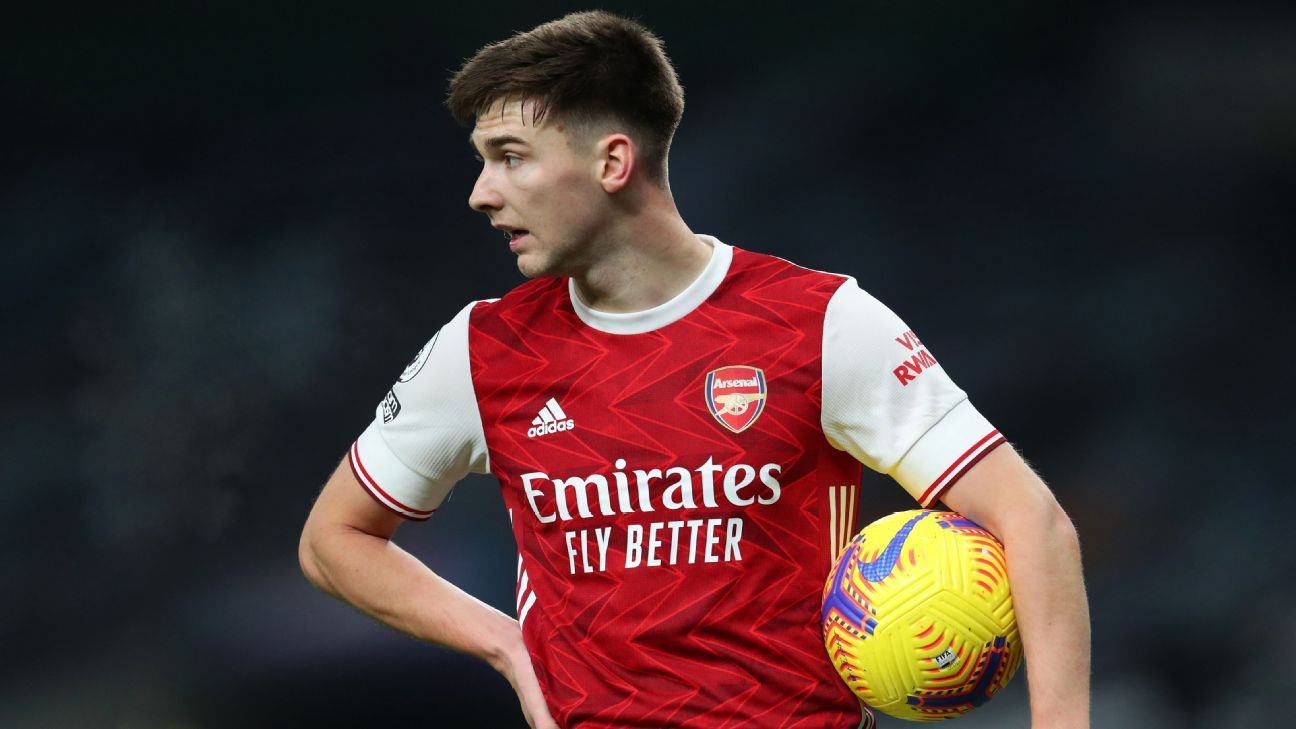 
The transfer window opened in early January, and speculation is heating up about potential deals. Check out the latest gossip below, and see all official deals here.

Napoli could be interested in making a move to sign Arsenal defender Kieran Tierney, the Daily Telegraph reports.

Tierney has emerged as one of Arsenal’s most reliable players this season. No outfield player has made more Premier League starts for the Gunners than the 23-year-old’s 16 this term, and his recent form was capped off with his stunning solo goal in the 4-0 at West Brom on Jan. 2.

The Scotland international also helped his nation reach their first major tournament in almost a quarter of a century when they beat Serbia on penalties in a European championship qualifier last November.

Tierney signed for Arsenal from Celtic for a £25m fee in the summer of 2019, but one of the other clubs chasing his signature at the time was Napoli. Now, according to the Telegraph, the Serie A side will make a fresh move to sign him this summer.

13.47 GMT: Atletico Madrid coach Diego Simeone has confirmed his team is closing in on the signing of Moussa Dembele.

The Lyon striker is expected to join Atletico on loan for the remainder of the season with a buyout clause included in the deal. Atletico are looking to strengthen their attack following the departure of Diego Costa last month.

Asked about Dembele’s arrival, Simeone said in Monday’s news conference: “It’s still not confirmed but [talks are] very advanced. Once he is here, I will give my opinion.”

Dembele, 24, was a key player for Lyon the previous two campaigns but has struggled to make an impact this season, scoring one goal in 16 league appearances. The France U21 international, who has a contract with Lyon until June 2023, is currently out of action with a fractured arm.

13.03 GMT: Borussia Dortmund winger Jadon Sancho, whose protracted summer transfer to Manchester United eventually fell through, has admitted that he has struggled this season.

Sancho has returned to the form that made him United’s top target in the last transfer window, scoring and assisting in back-to-back matches for Dortmund.

Speaking after Saturday’s 3-1 win at RB Leipzig (stream the replay on ESPN+ in the U.S.), Sancho told the Bundesliga’s official website: “Obviously this season has been very difficult for me personally. So I knew when I went away, I just focused on my game and came back raring to go. I’m working hard every day in training and on the pitch so I’m just happy to get my goals and assists.”

Morrison, 27, signed a one-year contract with the Eredivisie side in September, but has left after making only five appearances for them.

“The paths of ADO Den Haag and Ravel Morrison will separate immediately,” the club said in a statement released at the weekend. “ADO Den Haag and Morrison have decided to terminate the 27-year-old midfielder’s contract by mutual agreement.

Morrison is now looking for the 12th club of in a nomadic career that has included spells at West Ham, Serie A side Lazio and Mexican club Atlas, but he has never made more than 30 senior appearances for any team.

– Eredivisie on ESPN+: Stream LIVE games and replays (U.S. only)

11.44 GMT: Kazuyoshi Miura is set to play on at the age of 54 after extending his contract with Yokohama FC for another season, the club said on Monday.

The former Japan striker last scored against Thespakusatsu Gunma in 2017 in Japan’s second division, becoming the oldest player to score in a Japanese professional league game at 50 years and 14 days.

The 2021 season will be Miura’s 36th as a professional after starting his career with Santos in Brazil in 1986.

11.12 GMT: Valencia have made a second attempt to loan Tottenham Hotspur midfielder Harry Winks, according to Spanish journalist Guillem Balague.

Winks has not been in manager Jose Mourinho’s preferred selection for much of the season, and the England international has admitted that a loan move in January was an option to ensure he plays regularly in the run-up to the European Championship.

However, the 24-year-old started all of Tottenham’s recent games against Wolves and Leeds in the Premier League and the Carabao Cup semifinal against Brentford, before he was rested for Saturday’s FA Cup trip to non-league Marine (stream the replay on ESPN+ in the U.S.).

Balague reports that Valencia are willing to pay all of Winks’ wages, but the loan fee Spurs are demanding is prohibitively high.

10.35 GMT: Chelsea manager Frank Lampard has confirmed that defender Fikayo Tomori is set to leave the club on loan in January.

Tomori, 23, has made only four appearances for the club this season, most recently as a late substitute in Sunday’s 4-0 win over Morecambe in the FA Cup third round (stream the reply on ESPN+ in the U.S.).

“The situation with Fikayo is open at the moment,” Lampard said. “There is a possibility he could be going on loan to get games somewhere else. So that would have to be the solution for him and the club. That was part of my thinking of not starting him today.

“I gave him some minutes at the end but while we were looking at that I wanted to make sure it was the right thing for the club and for him and individually. So that’s why he didn’t start.

“But his attitude, even though he hasn’t played much recently, has been fantastic in training and in how he is.”

Newcastle are one of the clubs reported as a potential destination for the England international, who came close to joining West Ham on loan in the summer.

The England under-21 international has been linked with a move to West Ham but when asked whether Nketiah could move on in January, Arteta simply replied: “No.”

Arteta did, however, confirm reports that defender Rob Holding is set to sign a new contract – just five months after he almost left the club to join Newcastle, telling reporters: “It’s something that we will announce as quick as we can, but it looks like [he has signed].”

He was more coy over the future of Mesut Ozil, who is in talks with a number of clubs over a January departure from Emirates Stadium after being frozen out of first-team football.

Ozil is holding a Twitter Q&A on Monday evening and when asked if he will tune in, Arteta replied: “I am sorry but I don’t have Twitter. I don’t follow Twitter. He has done it in the past. It is something he does to try to engage with his fans, keep everybody informed so I am not surprised.”

09.21 GMT: Sevilla coach Julen Lopetegui has put pen to paper on a two-year contract extension, the club announced on Sunday.

The new deal will see the former Spain and Real Madrid coach tied to the La Liga outfit until June 2024.

Lopetegui, 54, has been at the helm of the Andalusian club for the last 19 months. Under Lopetegui, Sevilla won the Europa League last season and have reached this season’s Champions League round of 16, in which they will face Dortmund next month.

08.37 GMT: Inter Milan coach Antonio Conte has made it crystal clear his club will not be making any additions in the winter transfer window.

Speaking after his team’s 2-2 draw at Roma (stream the replay on ESPN+ in the U.S.), Conte said: “This year the word ‘want’ doesn’t exist, let it be clear. Already in August the club’s idea was given to me. We acquired [Achraf] Hakimi in April and then we haven’t bought anyone else.

“The road is clear, I don’t want anyone, and I will work with the players that I have available. There are strengths and weaknesses in this squad, but we’re going to fight with these. I’m happy, then forget the transfer talk for Inter because [the club] told me this.

“I read that I want this or that, but the wrong message is shown. Since August there has been no verb to want, there is the verb to work that I know very well.”

Reinier joined BVB on a two-year loan in the last transfer window, but the 18-year-old has struggled for playing time, winning just 138 minutes across eight brief appearances in all competitions. The Brazil under-23 international could now leave the Westfalenstadion.

“We have a lot of competition up front. Basically, we don’t want to give him away. But I will listen to everything,” Dortmund sporting director Michael Zorc told Sport 1. “If someone’s not happy because he’s not getting a lot of playing time, you’ll talk. But we won’t take the initiative.”

– Bundesliga on ESPN+: Stream LIVE games and replays (U.S. only)

Anderson is currently out on loan with Portuguese giants Porto, but in recent days, there has been an awful lot of talk about the Hammers cutting his stay short. It initially seemed as if they were planning on keeping him for themselves, but the story says that may not turn out to be the case.

Normally Anderson wouldn’t be able to play for another club this season, but with the rules set to be eased due to the COVID-19 pandemic, the Toffees could benefit.

DH is reporting that AC Milan are keeping an eye on Anderlecht sensation Albert Sambi Lokonga.

While there has yet to be any official approach from the Serie A title race frontrunners, all eyes have been on his progress as the January transfer window continues to roll on.

Lokonga has been compared to Barcelona legend Sergio Busquets and, based on how tight things are looking in Italy‘s top flight, Milan could use someone of his talents.

– Newcastle United‘s interest in trying to sign Manchester United defender Brandon Williams has come to an end, Northern Echo reports. It comes after reports indicated the Red Devils would no longer be entertaining the idea of sending Williams out on loan during the January transfer window, meaning the Magpies will have to look elsewhere if they’re serious about making some changes this month.

– BT Sport is reporting that West Bromwich Albion manager Sam Allardyce is planning on being “extremely busy” during the January transfer window. The Baggies have failed to light the world on fire since the veteran boss joined the club, and after being knocked out of the FA Cup by third-tier Blackpool, Allardyce is hoping to bring in a host of new names at The Hawthorns.

– Bristol City and Birmingham City are both interested in making a move to sign Crystal Palace striker Connor Wickham, The Sun reports. The 27-year-old’s contract is set to come to an end during the summer, and while he may currently be out of action through injury, both clubs are still contemplating a loan offer in the near future.