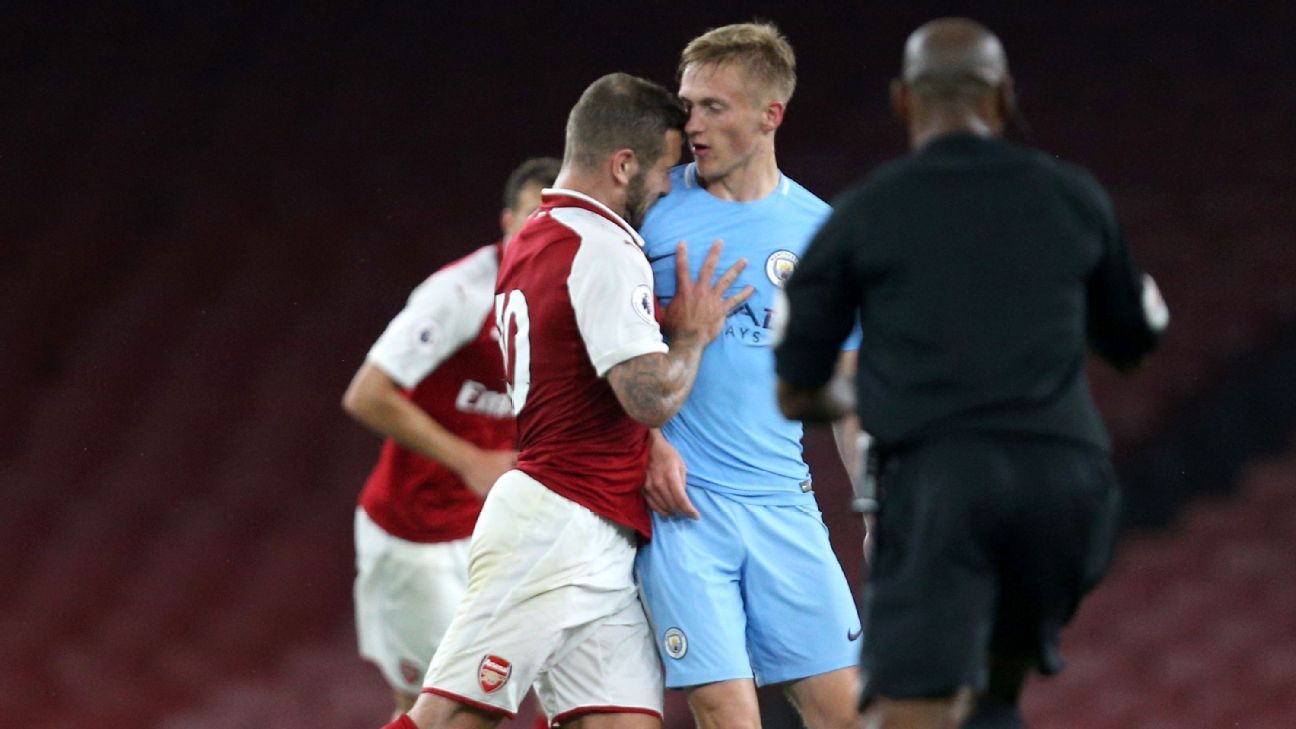 
Arsenal midfielder Jack Wilshere says his “hunger is back” and he is “buzzing for more games” despite being shown a red card after being involved in a mass brawl during the under-23s match against Manchester City at the Emirates Stadium on Monday night.

Wilshere has yet to play for the Gunners in the new Premier League season, having spent the last campaign on loan at Bournemouth.

However, the 25-year-old is now fit again following his recovery from the fracture to his lower left leg suffered during Bournemouth’s 4-0 defeat at Tottenham in April.

Wilshere was one of three first-team squad players drafted into Steve Gatting’s side, and helped put Arsenal on the way to leading 4-1.

However, just after the hour mark Wilshere reacted to a heavy tackle from City midfielder Matthew Smith and then grappled with Tyreke Wilson, which earned both him and the defender a red card following a scuffle in the centre circle.

Arsenal went on to win the match 4-3. Afterwards, Wilshere posted a positive message on his Instagram account as he focused on forcing his way back in the first-team picture.

He said: “Well, that was eventful… felt good to be back on the pitch at the Emirates even though it ended earlier than I thought. My passion and my hunger is back, buzzing for more games.”

The midfielder will now serve a three-match suspension, but only for non-first team fixtures.

Wilshere also appeared to take exception to an online report of the incident, which said his career had “hit a new low.”

The Arsenal player wrote to the reporter on Twitter: “Evening Sam…Intrigued to hear more about how you think this is a career low for me? Would love a sit down with you? Look forward to it.”

Having made his breakthrough when aged just 16, Wilshere remains Arsenal’s youngest player to have represented the club in the league, FA Cup and Europe, but appears to have fallen down the midfield pecking order behind the likes of Francis Coquelin and Granit Xhaka.

Speaking in August, Gunners boss Arsene Wenger made it clear Wilshere, who is in the final season of his current deal, remains in his plans, if the midfielder can return to full match fitness once again.

”At the moment, yes. I think I plan for him to be here for the whole season, after that we will see at the end of the season,” Wenger said. ”He has the talent to be regular, but he has to come back to competition in a consistent way.”

Lois Langton, the chair of the Arsenal Independent Supporters’ Association, believes Wilshere’s “fiery and passionate approach” could be just what Arsene Wenger’s side need this season.

“Jack’s reaction to what was an unnecessarily heavy challenge must be looked at in the context of his career which has to date been blighted by injury,” Langton told Press Association.

“It says little for the English game that the Man City player’s lunge on Jack has come in for almost no criticism in comparison to Jack’s retaliatory push which resulted in a brawl only when a second Man City player chose to wade into the action. Whilst Jack’s reaction cannot be condoned, the judgemental response and sensationalist headlines are wholly unwarranted.

“Jack’s fiery and passionate approach to games could be said to be precisely what is lacking in our team at the moment and for many supporters, the sooner Jack is back in first team action, the better.”