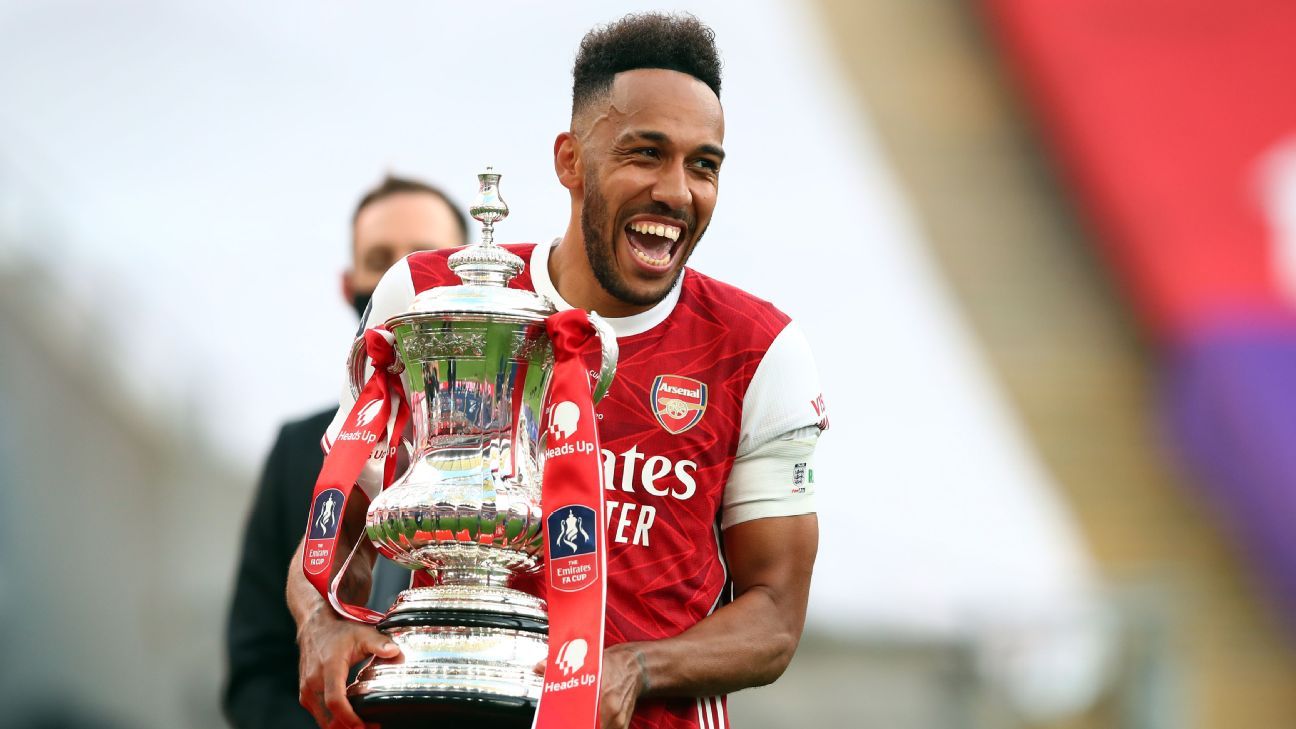 
Anyone questioning the wisdom of Arsenal effectively signing two players over the age of 30 is underestimating the urgency with which Mikel Arteta must return the club to the Champions League.

The Gunners are imminently expected to announce that Pierre-Emerick Aubameyang, 31, has penned a new three-year contract to continue a talismanic role in head coach Mikel Arteta’s rebuild, and in the same month that Willian, 32, joined on a free transfer from Chelsea. Although Aubameyang enjoys hero status at Emirates Stadium these days, having scored a remarkable 70 goals in 109 games since arriving from Borussia Dortmund in January 2018, committing such significant wages on a player entering the autumn of his career has been viewed by some as a gamble.

– Ogden: Breaking down Premier League 2020-21 fixtures
– Hunter: Will Koeman’s Barca dream job be a nightmare?
– Eckner: Bundesliga’s push to get fans back

Similarly, Willian has moved across the capital principally because Arsenal were prepared to offer him what Chelsea would not: a three-year deal taking him to the brink of his 35th birthday.

There may be next to no resale value in either transaction, but Arsenal simply cannot afford to think that far ahead. A difficult financial period was on the horizon even before the coronavirus reached England and robbed football clubs across the country of matchday revenue for months. It will be some time before stadiums are allowed to reach capacity again, while there are rumours of broadcasters seeking partial refunds for next season due to the diminished product they will air. Commercial partners are sure to have similar ideas.

And so, the Gunners need the revenues and prestige of Champions League football as soon as possible to avoid drifting further into the wilderness. Retaining and signing proven performers like Aubameyang and Willian is a vital step on this journey.

Former chief executive Ivan Gazidis once claimed that Arsenal budgeted to qualify for the Champions League in three of every four seasons. The club retained a healthy cash balance that included ring-fenced funds (approximately £30 million) as an insurance policy to maintain their competitiveness if they missed out, a fate Arsene Wenger managed to avoid until the final throes of his 22-year tenure.

Wenger kept the Gunners in the top four despite making £180m profit in player sales between 2009 and 2013, an essential revenue stream to help mitigate the debt created by moving to Emirates Stadium and commercial income that did not grow at the same pace as their rivals. But Arsenal simply don’t possess the same number of saleable assets in their first-team squad these days due to a combination of signings that have not worked out, a crop of youngsters with unproven potential and more than 10 players currently on contracts expiring by 2022.

Although technical director Edu is now aiming to shift as many of those unwanted players as possible, they cannot rely on sales to offset the financial effects of COVID-19 and the ongoing absence of Champions League football. (The 2020-21 season will be their fourth consecutive campaign outside the competition.) It is, incidentally, a factor in why the Arsenal academy are aggressively adding young talent to their ranks this summer.

Each season without Europe’s premier club competition is hugely damaging to a club reliant on matchday and commercial income. It’s a key reason why Arsenal have undergone an overhaul of their recruitment department and are in the midst of dispensing 55 non-playing staff.

It is also why they had to keep Aubameyang. Gabriel Martinelli has shown tremendous promise to date, but it would be a huge ask for him to fill Aubameyang’s shoes. In any case, he’s expected to be ruled out for the rest of the calendar year following knee surgery. Arsenal could not afford to spend money acquiring a goal scorer of Aubameyang’s calibre given a modest budget and the other areas of the team needing more urgent attention, specifically centre-back and central midfield.

There is also the message it sends out to the current squad and potential new signings. Aubameyang is a bonafide superstar, a well-liked member of the squad and a genuine draw for Arsenal’s transfer targets. It is therefore a different set of circumstances than the contract conundrum Arsenal endured with Mesut Ozil and Alexis Sanchez, two players who were always on the periphery of popularity.

It must be said, Aubameyang didn’t have many options to leave given that Barcelona are under huge pressure to cut a bloated wage bill and already have an aging squad, while Chelsea weighed up a move but ultimately signed Timo Werner from Red Bull Leipzig. But keeping the Gabon international is an important statement that for all the cuts and all the financial pessimism around the club, they are serious about trying to return to the Champions League.

The acquisition of Willian falls into a similar category. Arsenal do not need a right winger; they spent £72 million to acquire Nicolas Pepe while Bukayo Saka‘s emergence gives them another compelling option. It is intriguing, therefore, that Arteta is considering deploying Willian as a No.10; but regardless, luring him from Chelsea is a coup worth praising.

Chelsea head coach Frank Lampard desperately wanted Willian to stay, given he has been one of the team’s most consistent performers and shown little sign of physical decline despite his advancing years. Perhaps as significantly, Lampard regularly hailed Willian’s professionalism and application behind the scenes during a season in which contract talks dragged on throughout. The Brazilian may have divided opinion among Chelsea supporters by the end of his tenure at Stamford Bridge, but those who worked with him at Cobham speak of a diligent and focused individual who consistently set an example to those around him.

Arsenal need more of that.

Petr Cech highlighted the difference between the two clubs when speaking ahead of his final game before retirement last year, the 2019 Europa League Final that saw Chelsea beat Arsenal 4-1. “It will sound strange but I think generally at Arsenal there is not enough pressure,” he said. “Arsene is a real gentleman. As much as he hates losing, he stays a gentleman. If you lose, you win, you lose, you win, he kind of carries on. That’s something I’ve never experienced before.

“At Chelsea, at the times when we drew, it felt like a funeral in the dressing room. It was so bad.”

Unai Emery tried and failed to tackle that questionable mentality. Arteta is determined to succeed. It is why Arsenal pushed to keep David Luiz, for all his faults, and also a key reason in pursuing a deal for Cedric Soares, who won Euro 2016 with Portugal and is a similarly determined character.

Arsenal also have a young squad. Analytics website smarterscout looked at the average age of every Premier League squad weighted by playing time in the 2019-20 season. Arsenal ranked seventh at 26.4. Only Chelsea and Manchester United had a lower number of the teams that finished above them.

There was a time when Arsenal actively avoided signing players over 30. Wenger used 222 players in total and made 126 signings. Excluding loans, Wenger signed just eight different players over 30: Petr Cech, Sebastien Squillaci, Jens Lehmann, Sol Campbell, Mikael Silvestre, Mart Poom, Davor Suker and Oleg Luzhny. There were a number of reasons for this. Wenger took the greatest pleasure in unearthing and shaping raw talent. It was also cheaper. Arsenal habitually offered only one-year extensions to players past their 30th birthday, a policy Wenger clarified after signing Squillaci in August 2010.

By that logic, Arsenal would almost certainly not have signed Aubameyang or Willian on the terms they have this month. But times change. Back then, the Gunners could prioritise planning for the future, accepting that some players would leave to excel elsewhere while relying on the genius of a celebrated manager afforded time by past glories. Not now. The gap between them and the top must not get any wider.

Arsenal desperately need Champions League football to arrest their sporting and financial decline. Further reinforcements are needed, but Aubameyang can lead from the front and Willian should hit the ground running. There is no time to waste.