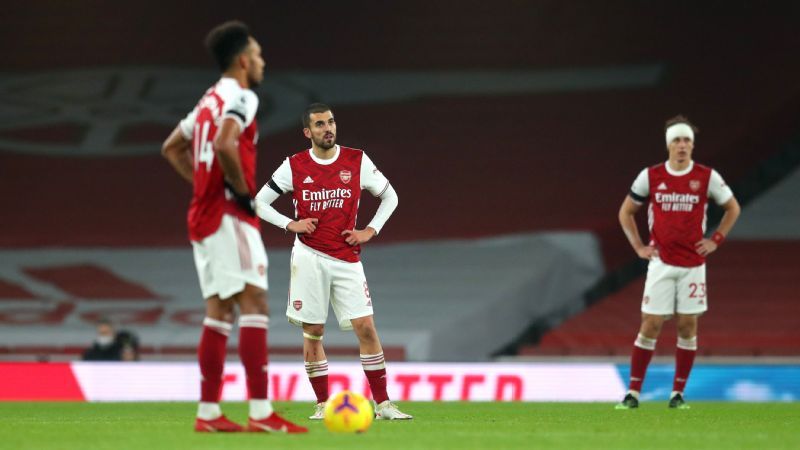 
Wolverhampton Wanderers saw out a 2-1 win over Arsenal to move into the top six of the Premier League at the Emirates on Sunday.

The game was halted inside of five minutes when Arsenal’s David Luiz and Wolves’ Raul Jimenez collided heads following a corner kick. Luiz was able to play on, while Jimenez was stretchered off the field after an extended delay while a team of medics treated him on the pitch.

Jimenez, who was taken to hospital, was replaced by Wolves’ club-record summer signing Fabio Silva and shortly after the visitors took the lead when Pedro Neto knocked in a rebound when Leander Dendoncker‘s header came back off the crossbar.

The lead was short-lived, though, as Gabriel headed Arsenal level from Willian‘s whipped in corner, but Daniel Podence put Wolves back in front before the teams played 10 minutes of stoppage time ahead of the break due to the Jimenez injury.

Luiz was substituted by Arsenal boss Mikel Arteta at half-time.

Arsenal were better in the second half and applied plenty of pressure, but Wolves’ defence was up to the task, managing to keep the Gunners and striker Pierre-Emerick Aubameyang at bay despite some good chances.

Former Arsenal boss Unai Emery was sacked exactly a year ago but, despite initial encouraging signs under Arteta, Arsenal have stagnated and this is now their worst start to a Premier League campaign following three successive home defeats.

Following the match, Wolves’ skipper Conor Coady said of the Jimenez injury: “We were massively worried when it happened. We knew straight away it was a horrible clash of heads.

“But we just hope and pray everything is OK. I was at the front just behind him when it happened. It’s something we never want to see.

The result puts Wolves, who picked up their first league win at Arsenal, in sixth place on 17 points, while Arteta’s side remain in 14th with 13 points from 10 games.