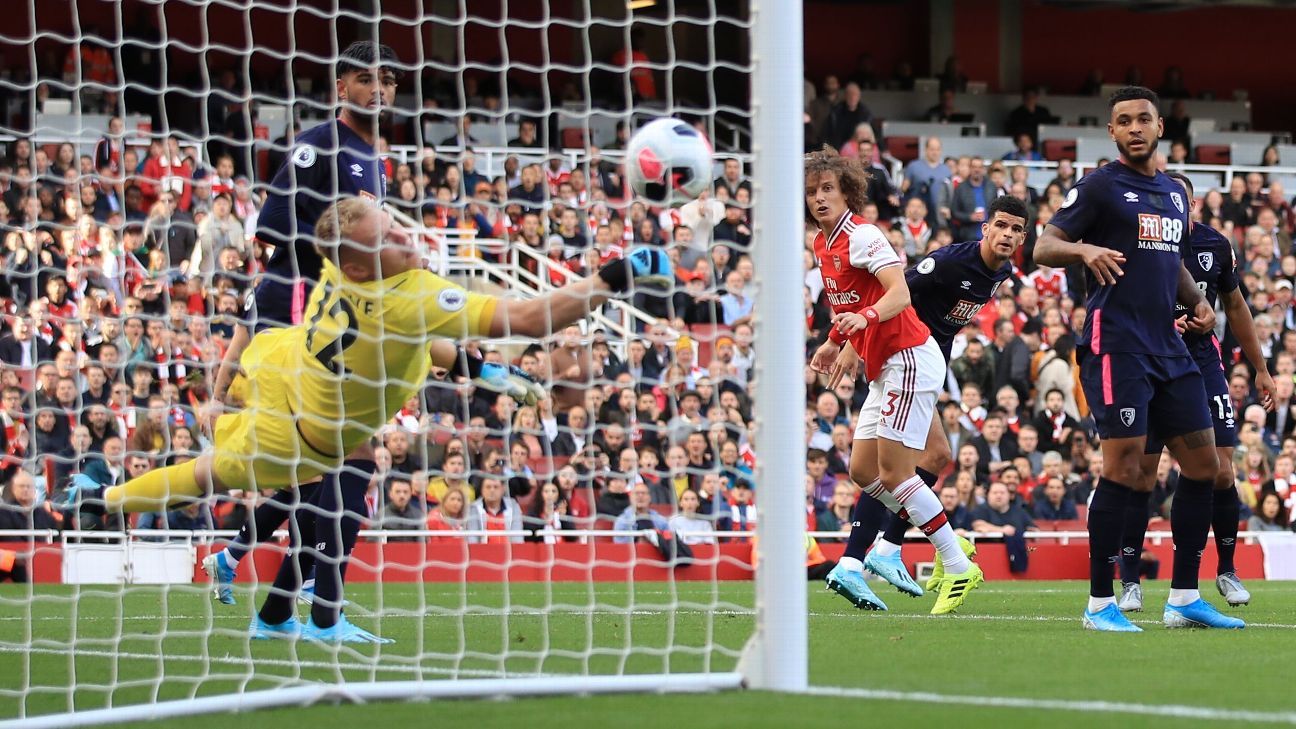 Arsenal held on for a scrappy 1-0 win over Bournemouth after dominating much of the first half.

The Gunners moved up to third behind Manchester City and Liverpool, but will be disappointed at the lacklustre nature of the win as Eddie Howe’s men almost pulled off a shock at the Emirates.

Pierre-Emerick Aubameyang fizzed a shot from 20 yards just wide early on but Arsenal took the lead inside 10 minutes as £72m summer signing Nicolas Pepe whipped in a good corner and David Luiz was left unmarked to head past Aaron Ramsdale in the Bournemouth goal.

It was almost 1-1 when Dominic Solanke flicked wide from only eight yards out but Bournemouth were unable to get into the game beyond that and Pepe curled a shot wide before falling in the box under a tackle from Diego Rico. Referee Martin Atkinson ruled no penalty and the VAR check did not see reason to overturn it.

The 18-year-old Bukayo Saka, starting again on the wing, tested Ramsdale on 36 minutes but it was easily saved.

Then Dani Ceballos found plenty of space and his teasing cross found Calum Chambers at the far post. The defender hit a fine volley but it went wide of the target.

Just before half-time, Pepe again went over after an apparent push from Rico, but no penalty was given after another VAR check.

Bournemouth came out firing from the break as Callum Wilson turned Luiz and then rounded Arsenal keeper Bernd Leno, only for Chambers to clear his cross off the goalline before Harry Wilson could poke home.

Lazy defending from Sead Kolasinac saw Jack Stacey get past him and clip a shot which Leno did well to palm away.

Pepe made way for young Gabriel Martinelli, who impressed in midweek with two goals in the Europe League, while Bournemouth brought on a player linked to Arsenal in the transfer window: Ryan Fraser.

Substitute Joe Willock fed Martinelli, who shot wide, but Arsenal could have conceded a penalty as Wilson was barged over by Kolasinac.

Aubameyang hit the post late on and Wilson missed two further chances in the closing stages. Steve Cook headed over from a corner as Arsenal somehow clung on for the victory, moving above Leicester City into third on 15 points, nine behind leaders Liverpool after eight games. Though given the home side’s advantage in the first half, it should have been a lot simpler.

Arsenal had shipped five goals in their previous three league home games and coach Unai Emery said he had spoken to his players of the importance of taking control of the game.

“We said we wanted to take a step ahead in this match after the three games. We controlled the first half, we were organised and we got close to their area a lot. The first half is a good example of how we should play,” he told a news conference.

“I’m critical of the team but also very positive. We know our obligation is to win but how we win is also very important.”

Bournemouth are 10th on 11 points and coach Eddie Howe criticised his side for their first-half display but said they deserved more for their efforts after the break.

“We were a little bit too passive and didn’t dominate our style on them. But you saw the other side in the second half,” he said.

“We dominated possession and deserved a point, we did well enough and had good enough chances. When we play well we’re a match for anybody, if we’d played in the first half like we did in the second we’d have won the game.”