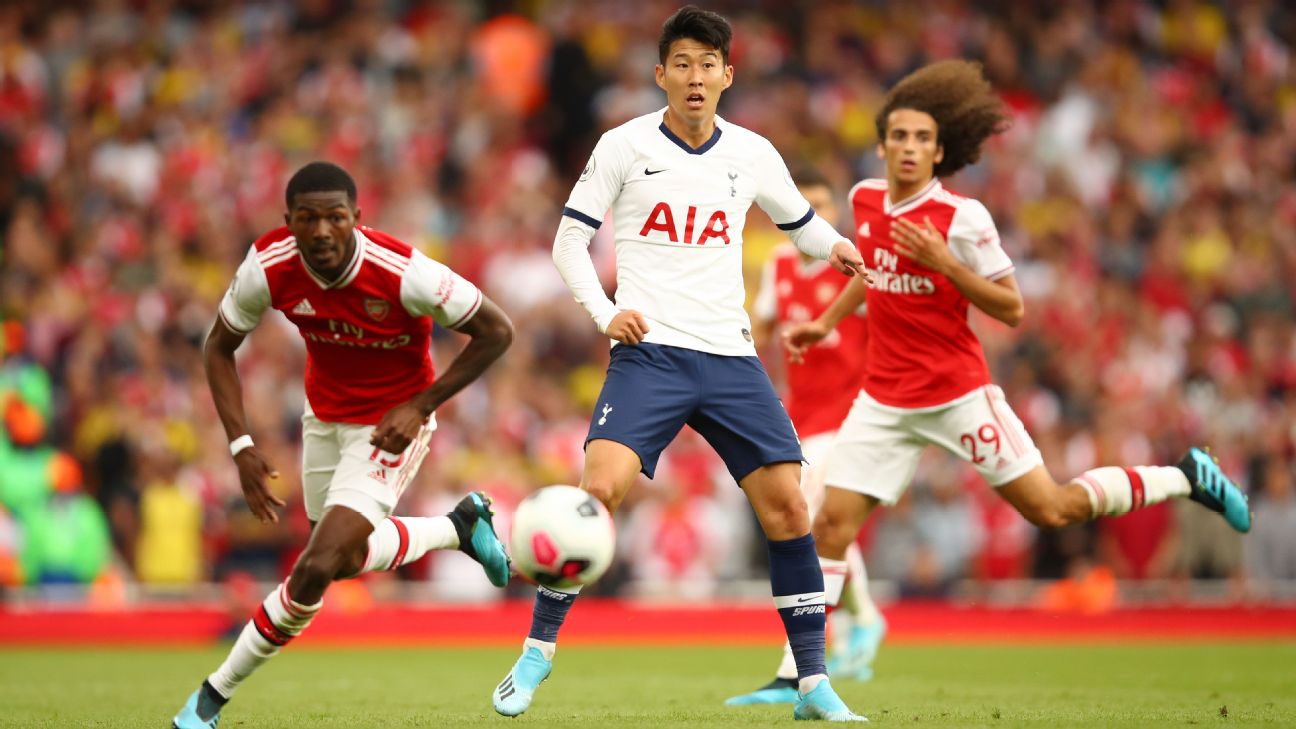 Game of the weekend

In these days of infinite possibilities for interaction between football and the watching public, there should really be button everyone can press which forces a game of football to be extended indefinitely. You can only use it once a season, but if enough people press the button, then the teams must keep on playing for our amusement.

That game this weekend would have most certainly been the north London derby between Arsenal and Tottenham Hotspur, a chaotic mess of a fixture that was nonetheless massively entertaining to watch, two sides with just the right balance of strengths and flaws to produce a spectacle like that. It was 2-2 but it could have been 5-5. More of this please.

Arsenal’s problem of the weekend

For the neutral, the element of chaos that David Luiz and Granit Xhaka bring to Arsenal is extremely entertaining. For Arsenal themselves, it’s more of a problem.

These are two players who between them have played in six different countries, winning five league titles, who have nearly 900 senior club appearances and 132 international caps. And yet they cost Arsenal goals with challenges that you’d reprimand a giddy teenager for, Luiz storming into a tackle that Son Heung-min merrily skipped past, Xhaka for some reason going to ground and ploughing through the same player to concede a penalty.

They will have to live with Luiz, because Arsenal frankly have nobody much better at centre-back. But in midfield, this should be the last we see of Xhaka in a game of much significance. He’s simply a liability.

Tottenham’s problem of the weekend

You could argue either way whether this was a good result or not for Spurs, but more interesting was Mauricio Pochettino’s post-match suggestion — and not for the first time — that not everyone had been “100% focused” on Tottenham before this week.

The implication was that now the European transfer window is closing, attitudes will change and minds will concentrate on the job in hand. But will that automatically happen? Will Christian Eriksen immediately banish all thoughts of Real Madrid and get on with being brilliant for his current team? Will whoever else Pochettino was archly referring to only care about the badge on their chests?

And that’s if you even accept this has been their problem. There’s a strong sense that Pochettino is simply using the distractions of the transfer window to mask issues that have been festering for a while: their vulnerabilities at full-back, Hugo Lloris’ form (though he made some vital saves at the Emirates), an increasing sense of disorder in midfield. None of those will be solved by the transfer window closing, so it will be interesting to see how Pochettino handles this from here.

Scuppered plans of the weekend

Brighton defender Dan Burn said before their defeat to Manchester City on Saturday that they had been working on a plan all week to deal with the defending champions. City scored their first goal after 71 seconds, calling to mind Mike Tyson’s famous maxim that “everyone has a plan until they get punched in the mouth.”

It’s a decent encapsulation of how nightmarish City are to face: you can spend hours figuring out how to stop them, how to beat them, looking for weaknesses…and then they’re too good anyway, score after a minute and all your work is wasted.

Teething problems of the weekend

In the end the bigger surprise from Chelsea’s 2-2 draw with Sheffield United was not Frank Lampard’s side giving up a two-goal lead, but that it took until the last few minutes for the equaliser to come.

Lampard is learning on the job and will grow from his mistakes, but at the moment he’s doing a lot of learning and growing. Bringing on the 18-year-old Billy Gilmour for his senior debut in the last few minutes as United were gaining momentum, for example, didn’t look like the shrewdest move: Lampard defended it by pointing out Mateo Kovacic, the man who came off, was tired, but entrusting a rookie rather than someone with 52 Croatia caps — weary or not — was a significant gamble.

Maybe we shouldn’t be too harsh on Lampard: after all, it’s not his fault that Gilmour was the only midfielder on his bench. It also isn’t his fault that Cesar Azpilicueta, the formerly rock solid, super-reliable Cesar Azpilicueta, is having a rotten start to the season: both United goals came from his side, one when he was easily turned and nutmegged, the other when he lost track of Callum Robinson‘s run. This column made the point a few weeks ago, but Lampard has enough problems without having to worry about a player none of his predecessors had to worry about.

Management of the weekend

Much has been said and written about Sheffield United’s innovative tactics and style of play this season, but surely the key to all of that is that their players have the confidence to actually pull those ambitious plans off. This is where Wilder’s man management comes in, and him reiterating to his squad that grounds like Stamford Bridge is where they belong is part of that.

By all accounts Wilder’s assistant Alan Knill is the tactical brains behind this United team, but it’s thanks to Wilder that they put the theory into practice.

Possible delusion of the weekend

“The last three games, we know we deserved to win all three. That doesn’t give us any comfort in the table. But it does give us comfort that we know we’re doing the right things, we’re on the right track.”

It’s possible that the relentlessly optimistic Ole Gunnar Solskjaer is just trying to keep his troops’ spirits up, in his comments following their 1-1 draw with Southampton. But to take them at face value is to wonder if we all have indeed been watching the same games as him, rather than some much more favourable computer simulation in which Manchester United have been…well…good.

Spat of the weekend

Liverpool are now so good that Sadio Mane tantrum, upset at some unspecified person for some unspecified reason after being taken off against Burnley, can be spun as a positive for them (fighting spirit, competitiveness, etc., and so on) without it sounding too ridiculous. Fairly ridiculous, sure, but not excessively so.

They’re top of the league, have a 100% record and are already seven points clear of Manchester United. Maybe Mane was just trying to make things a bit more interesting.

Luckiest moment of the weekend

All that said, would things have turned out the same for Liverpool at Burnley had Trent Alexander-Arnold’s cross not looped wildly off Chris Wood and into the net to give them the lead? Perhaps, but to that point it had been a tough encounter, and that goal punctured Burnley’s resolve.

What is it about a perfectly-judged lob that is so satisfying? Is it the skill? Is it that they’re relatively unusual? Is it that we can see earlier than most other goals that they’re going to be goals, so we have time to savour them? Whatever it is, Jamie Vardy’s first in Leicester’s win over Bournemouth was an absolute peach, and we could watch it over and over again.

New VAR issue of the weekend

Another weekend, another round of decisions that VAR could have corrected but didn’t. But the weekend has also revealed another side effect of the system, which is referees escaping the blame for poor decisions based on misunderstandings about how it is used.

Kevin Friend’s absurd decision to deny Aston Villa a goal because Jack Grealish had ‘dived’ — this despite him having been fouled twice in the space of half a second and not even claiming a foul — was initially deemed a failure of VAR, complaints broadly directed towards the fact that the decision hadn’t been reversed. But it apparently could not have been referred, a subsection of the implementation that hasn’t been well communicated to the general public, meaning more confusion was created.

You could argue that these are merely teething problems which will be ironed out as the season continues, or you could simply think that a new issue will emerge either week, something we would not encounter had we all just been adults and accepted that referees get things wrong sometimes.