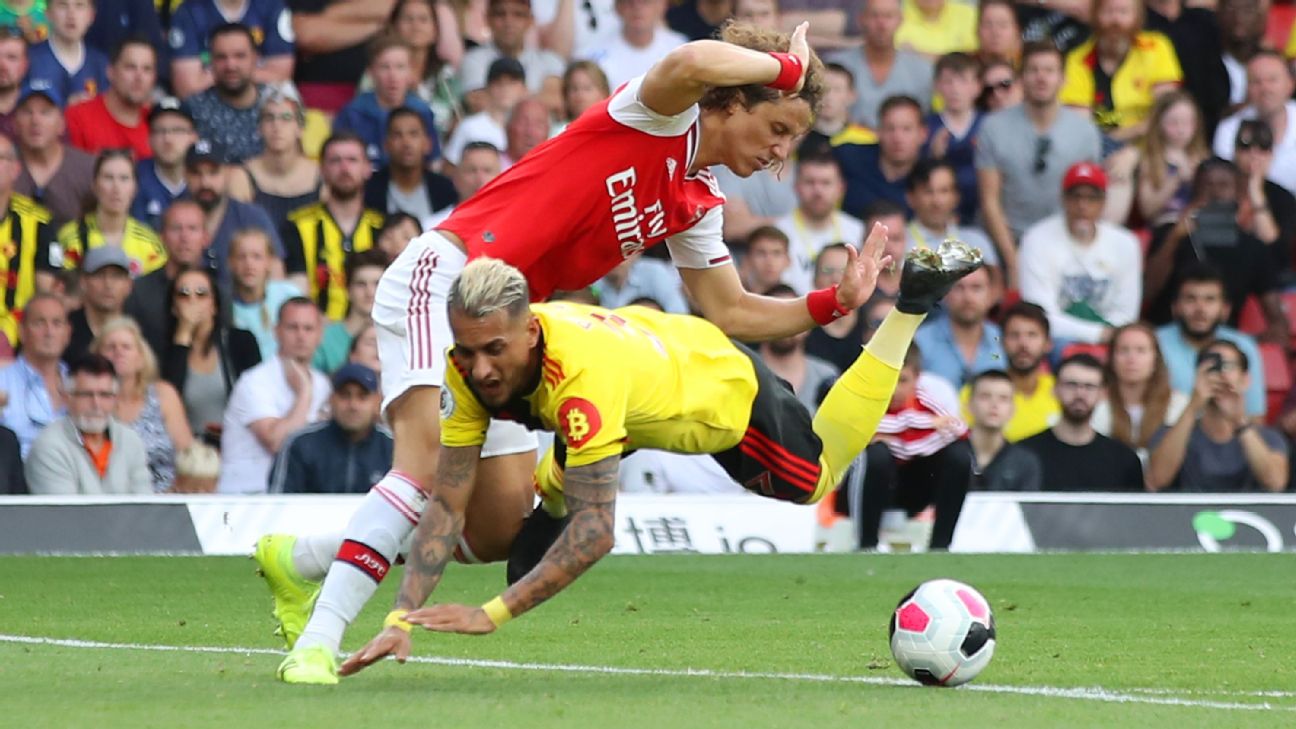 
Arsenal failed to get back to winning ways in the Premier League as they surrendered a two-goal advantage to draw 2-2 with Watford at Vicarage Road. target=”_blank”>Pierre-Emerick Aubameyang scored twice in the first 45 minutes to heap the pressure onto the Hornets, but a Tom Cleverley strike and Roberto Pereyra penalty ensured the two sides shared the spoils.

Arsenal were often able to carve Watford out at the back and whenever they made their way down the wings, there was an ever-present threat of a goal. There was a fluidity to their movement that took their opponents a while to figure out, to the point where you could argue there is no better attacking cohesion on display in the the Premier League.

The visitors were incredibly sloppy from a defensive standpoint and were bullied off the ball at will, especially in the first half. They allowed Watford far too much space on the ball and appeared to ride their luck after building a two-goal lead, which came back to haunt them after the Hornets were able to string together some smart passages of play.

Unai Emery, 6 — The Spaniard went with a bit more of an experimental formation and line-up, which seemed to pay off for much of the game. Yet he panicked with his substitutions when the Gunners were under pressure and bringing off Ceballos came across as a questionable decision.

GK Bernd Leno, 6 — The keeper’s finest moment came in the 11th moment when he made a nice save from Tom Cleverley. Struggled with his catching at times, and probably could have shown more power to deny both Watford goals.

DF Sead Kolasinac, 6 — Carried the ball forward incredibly well for Arsenal’s opening goal of the game. Picked up a yellow card in the 43rd minute for a silly challenge on Hughes and seemed to lose his composure from that point.

DF David Luiz, 5 — Never seemed overwhelmingly eager to close Watford down and always looked like he was in a state of panic when they were surging forward. Gave away the penalty for Watford’s second with a needless trip inside the area.

DF Sokratis Papastathopoulos, 5 — Looked to be on track for a strong performance after the first half, but was responsible for carelessly giving the ball away as Cleverley began Watford’s comeback.

DF Ainsley Maitland-Niles, 6 — Wasn’t particularly effective at the back and always seemed to be weak on the ball. Had some great positional play for Arsenal’s second goal, which he assisted.

MF Granit Xhaka, 6 — Looked lazy at points but did his job in the middle fairly well considering the criticism he’s been receiving as of late. Had a golden opportunity to steal a victory for Arsenal in the 88th minute but couldn’t control the ball.

MF Dani Ceballos, 7 — His intensity and vision continues to be one of the brightest sparks in Arsenal’s starting XI. Won the ball back in vital positions and controlled the pace well. Was surprisingly substituted in the 60th minute.

MF Mesut Ozil, 7 — Put in the kind of creative display that reminds fans and pundits as to why he can be such a valuable asset for the Gunners. Played a nice through-ball that opened the door for his side’s second goal. Was substituted in the 71st minute.

MF Matteo Guendouzi, 5 — Arguably his worst performance in an Arsenal shirt. Gave the ball away in vital areas of the pitch and picked up an avoidable yellow card for a push off the ball. Was substituted in the 67th minute.

FW Nicolas Pepe, 6 — Moved around the pitch with such ease and was consistently able to unlock Watford at the back. Allowed the ball to get away from him on a few occasions and lost his cool during a scuffle late in the game.

FW Pierre-Emerick Aubameyang, 8 — Scored both of Arsenal’s goals and was always a threat. His turn and strike for the first was great, while the second showcased his ability to get into perfect positions.

MF Joe Willock, 6 — Will go down as a questionable substitution from Emery as Willock, aside from a few moments of joy, looked tense after coming on in the 60th minute.

MF Lucas Torreira, 6 — Was quite ineffective after taking to the pitch in the 67th minute, and didn’t really have enough time to get into the usual rhythm we’ve seen in the past from the Uruguay international.

MF Reiss Nelson, NR — Had a few bright moments after being brought on in the 71st minute but lacked the end product that Arsenal desired.