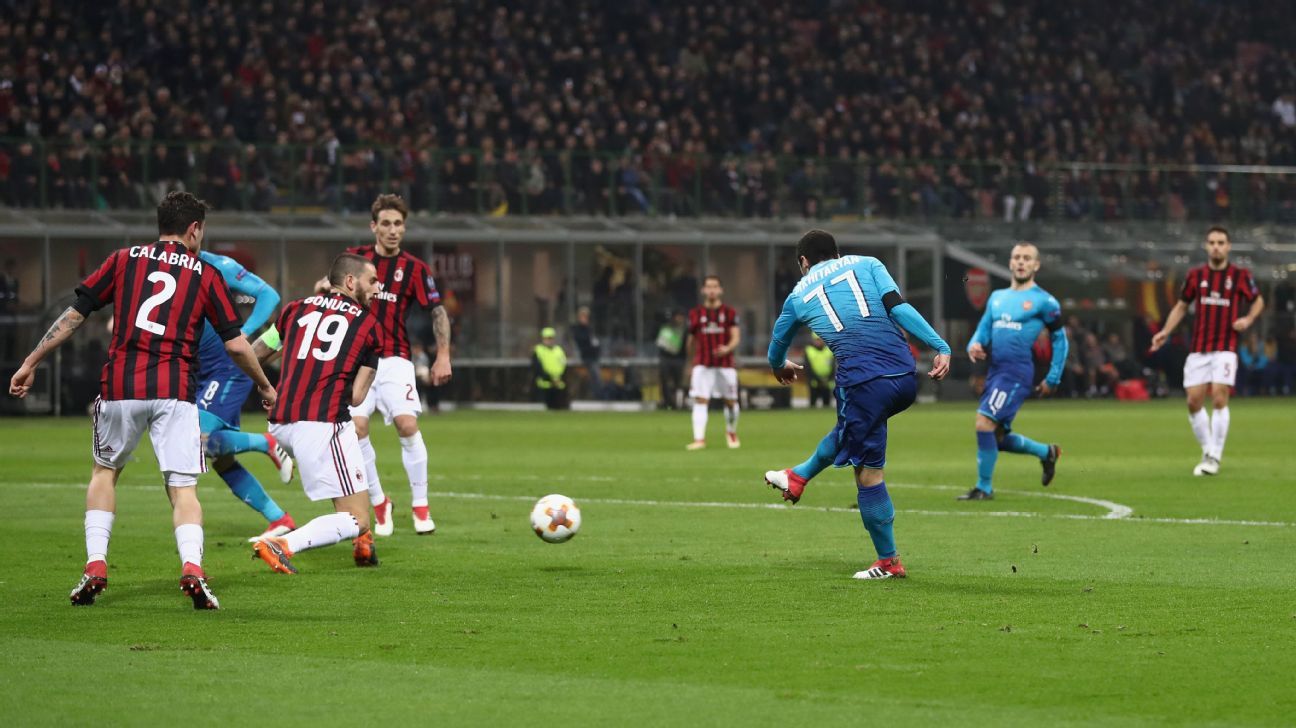 
MILAN, Italy — Three quick thoughts from the San Siro on Arsenal’s 2-0 first-leg win over AC Milan in the Europa League round of 16.

1. Arsenal finally deliver a win to ease pressure on Wenger

Don’t say your farewells to Arsene Wenger just yet. The Arsenal boss was granted a stay of execution as his Gunners finally produced the kind of performance that indicates there may be hope for this team yet.

It also keeps hope alive of winning this competition, which seems the only way for Arsenal to salvage what has been a mightily disappointing season and possibly save Wenger’s job.

The Frenchman had been in danger of losing five straight games for the first time in his 21-year Arsenal career but instead finds himself with at least a slimmer of hope that things can still turn around.

Mkhitaryan couldn’t have picked a better time to score his first Arsenal goal, as he controlled a pass from Mesut Ozil on the left-edge of the box in the 15th minute, cut inside and fired a shot that was deflected past Gianluigi Donnarumma. That settled Arsenal’s nerves after a bright start from Milan, and suddenly the Gunners were playing with the kind of intensity and urgency that has been lacking in recent games.

Even Wenger had admitted this was the last chance for this team, and they looked determined to take it. Despite the continued struggles of Danny Welbeck up front, Arsenal continued to threaten on quick counterattacks and Ramsey doubled the lead just before half-time with a beautifully taken goal. Ozil was again the architect, slotting a perfect through ball for the Welsh midfielder to come clear on goal, where he calmly rounded the goalkeeper and slotted into an empty net.

It was perhaps the first sign of cheeky confidence that an Arsenal player has shown in a month.

That’s not to say Arsenal’s problems have all gone away. This was still a performance with plenty of mistakes and deficiencies that would not have gone unpunished by a more ruthless side.

Calum Chambers, filling in for the injured Hector Bellerin, looked the weakest link at right-back and handed Milan two good chances to score at 0-0.

First, he gave the ball away straight to Hakan Calhanoglu who set Patrick Cutrone racing through on goal, but the forward fired wide from a narrow angle. Calhanoglu then easily flew past Chambers to run onto a through ball and could easily have chosen to go down in the box when David Ospina made an ill-timed rush off his line to clear. But the winger stayed on his feet, allowing Ospina — and Wenger no doubt — to draw a big sigh of relief.

Giacomo Bonaventura then wasted a great chance to pull one back in the 52nd minute when he was left completely unmarked to meet a cross into the box, but fired high. It was a reminder that Arsenal’s defence is still liable to collapse at any time and that even a 2-0 lead is far from safe for this side going into the return leg at the Emirates.

This was the Mkhitaryan that Arsenal were hoping for when they swapped him for Alexis Sanchez in January. The Armenian has taken his fair share of the blame for Arsenal’s woeful form but produced his best performance yet in an Arsenal shirt — looking almost Sanchez-like with his ability to cut in from the left flank and fire at goal.

His first attempt went just wide after he was teed up by Jack Wilshere and he needed a bit of luck with the deflection on his goal. He was unlucky not to get a second, when he cut in from a similar angle just before half-time and saw his effort crash off the bar. Questions have been raised about whether Mkhitaryan and Ozil can form an effective partnership, but this was the clearest evidence yet that they can indeed co-exist.

But perhaps the brightest news for Arsenal was that they finally delivered on a big European stage, having been knocked out in the round of 16 of the Champions League for the last seven years running. And surprising as well, given the dreadful away form that has seen them lose at Bournemouth, Swansea, Tottenham and Brighton since New Year’s. But somehow, they weren’t intimidated by the heated atmosphere of the San Siro, the most hostile place they’ve played all season.

For a team so low on confidence, maybe that was the biggest achievement of the night.

3. Milan’s season on the brink

Gennaro Gattuso will need more than just his passion to really turn this Milan side around.

The former midfielder has revived Milan since taking over as manager in November, but this loss means the storied club’s season could still fizzle out into a total waste. Milan were on the opposite trajectory of Arsenal, going into the game on a 13-game unbeaten run and with confidence running high.

But on this evidence, they’re not yet ready to re-join Europe’s elite.

A more ruthless side would have put Arsenal to the sword here, but Milan lacked the cutting edge when presented chances to do so.

A bright start from Milan saw the hosts create three corners in the opening five minutes, and they nearly scored after one when an inswinging cross floated across the goalmouth but went just out of reach of Bonaventura at the far post. It was a sign of things to come as the end product was simply missing throughout the game. Arsenal have not kept a clean sheet in 11 Premier League games, but were repeatedly let off the hook by Milan’s wasteful finishing.

When Milan spent nearly €200 million last summer in the transfer market, they had something completely different in mind than this. Gattuso’s energy and desire has already rubbed off on his players, but the former holding midfielder can’t teach them to score.

They still have 90 minutes to reverse this result at the Emirates next week, but sharper finishing is a must even against this porous defence. Like Arsenal their season is down to Europa League or bust.