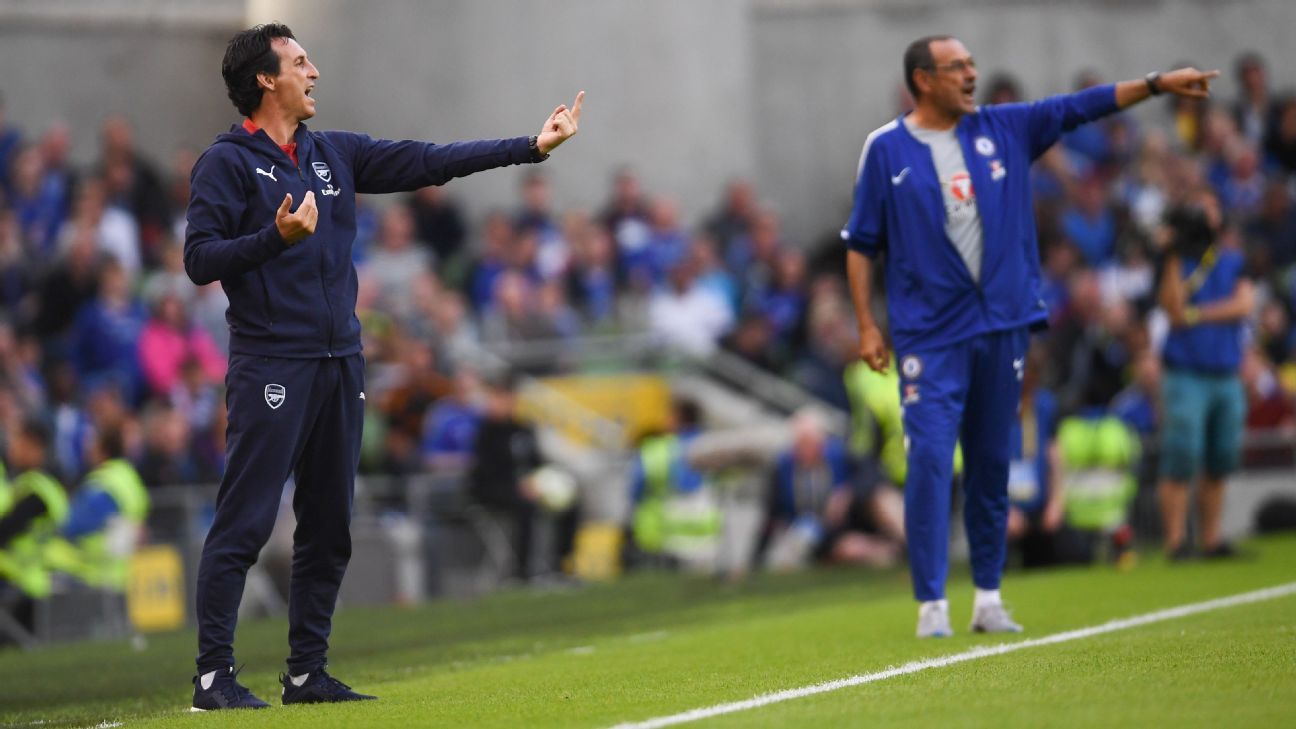 
This should have been a summer of uncertainty and turbulence at Arsenal.

After all, the last time a long-serving manager left a club after building an empire, Manchester United immediately went into a post-Sir Alex Ferguson tailspin and many would argue that the aftershocks of that first summer are still being felt at Old Trafford, five years on.

Arsene Wenger’s departure from Arsenal at the end of last season, after 22 years in charge, was another potential earthquake for one of English football’s biggest clubs, especially with it taking over a month to identify, and appoint, his replacement in Unai Emery.

But as the new season approaches, Arsenal have recruited well, offloaded some of Wenger’s deadwood and the noises coming out of the club are as positive as they have been for more than a decade.

Wednesday’s International Champions Cup win against Chelsea in Dublin — albeit after a penalty shootout — was another reason to be cheerful for Arsenal’s supporters heading into the new campaign, who will know that the club and team will need all of the positivity they can muster ahead of a crucial season for the club.

For Arsenal, and their opponents at the Aviva Stadium, Chelsea, the 2018-19 campaign is the most important for years.

While Arsenal have sailed relatively serenely through the summer, avoiding the difficulties that many had forecast, Chelsea have had to negotiate far stormier waters.

Antonio Conte’s exit as manager was inevitable, but for him to return for the start of preseason training before being dismissed in favour of Maurizio Sarri in early July denied the club, and the new coach, crucial preparation and planning time.

Add in the ongoing uncertainty over the futures of Thibaut Courtois, Eden Hazard and Willian, and the addition of just one major signing in Jorginho, and it is easy to suggest that Chelsea should be entering the new season with some trepidation.

It should have been Arsenal in that situation, but they have been decisive with Emery and proactive in the transfer market and they have avoided the dithering and uncertainty which proved so disastrous for United and David Moyes in the immediate aftermath of Ferguson’s retirement.

Over the years, Chelsea have proved to be the exception to the rule that stability beats upheaval, with Roman Abramovich regularly chopping and changing managers at Stamford Bridge, but this summer feels much messier and more disjointed than previous regime changes at the club.

Only time will tell whether Arsenal’s strategic approach or Chelsea’s chaos is the winning blueprint, but this season will be a defining one for both because of its unique challenges.

Both must overcome the disadvantage of attempting to secure a top four finish while playing in the Europa League.

Emery and Sarri must decide whether to pursue both routes to Champions League qualification or whether the Europa League is too much of a drain on their resources, because another year out of club football’s most important and lucrative competition is simply not acceptable for either team.

But has Sarri been given enough time to impose his methods on Conte’s squad and turn Chelsea into a Premier League version of his Napoli team?

Jorginho will help, having played under the Italian in Naples, but Sarri has inherited a squad with ageing players (Gary Cahill, Cesc Fabregas), players whose minds are elsewhere (Courtois, Hazard, Alvaro Morata) and domestic talent (Ross Barkley, Danny Drinkwater, Ruben Loftus-Cheek) who have yet to prove they are good enough for the club.

Sarri has all of those issues to deal with at the same time as juggling his resources between the Europa League and Premier League for an owner who has rarely shown patience with managers who fail to succeed.

The landscape looks different at Arsenal.

Emery has overseen a full preseason and added five players to a squad that was incredibly light on big-game mentality.

Stephan Lichtsteiner, Sokratis Papastathopoulos and Lucas Torreira will add steel and determination to the team, with Emery’s demand for intensity, desire and work rate already showing signs of bearing fruit in preseason.

There is a real sense of renewal at Arsenal, but Chelsea have still show they have adjusted to life under Sarri following Conte’s delayed exit.

It is just over two weeks until the two teams meet at Stamford Bridge in the Premier League, with Arsenal opening their campaign with a tough encounter at home to Manchester City, and it will be a game that gives a much clearer indication than the Dublin friendly as to where they both are under their new managers.

But right now, Arsenal look to have made the greatest strides, even though this was the summer that many at the club had dreaded.