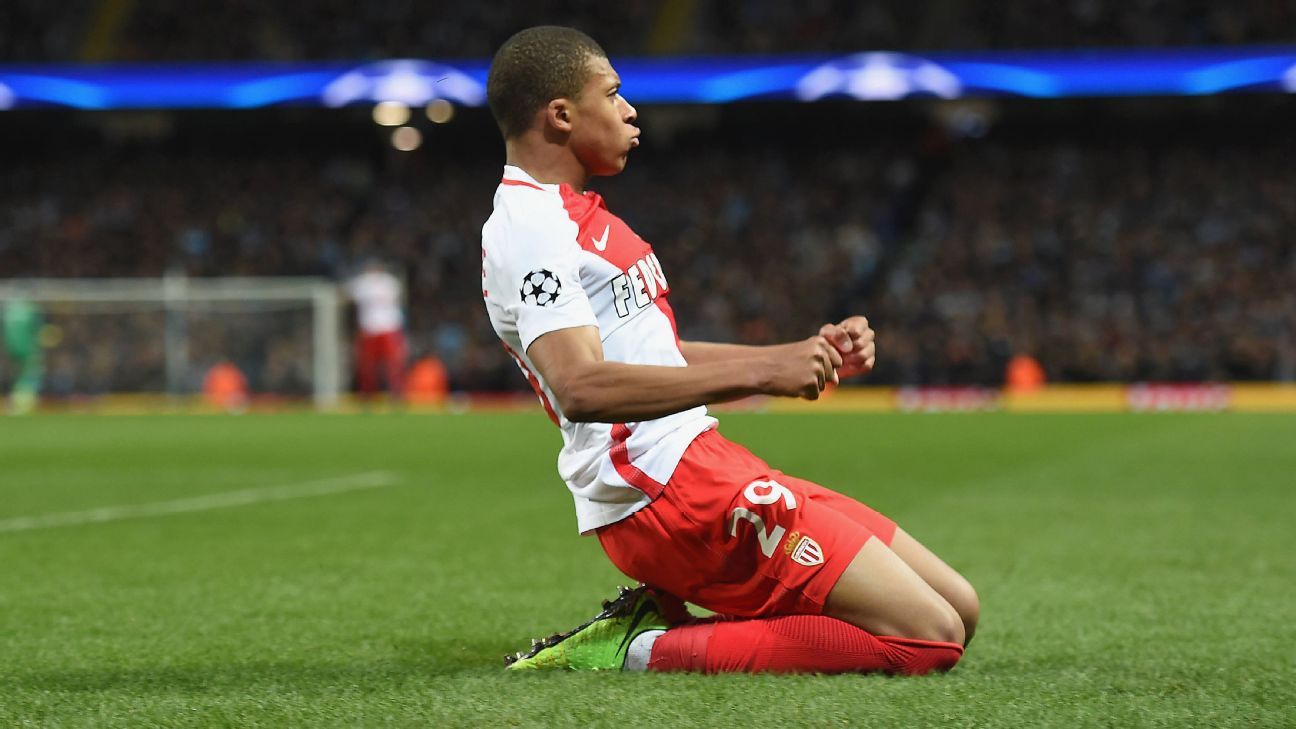 TOP STORY: Arsenal won’t give up on Mbappe

AS Monaco sensation Kylian Mbappe has been heavily linked with a move away from the principality this summer, with big-spenders Real Madrid and Manchester City both said to be interested in signing the 18-year-old.

But Arsenal manager Arsene Wenger could land a surprise blow on his rivals with an incredible £125 million swoop for the striker, if the Sunday People is to be believed.

The paper says that Wenger “will use his French connections” to persuade Mbappe to join him for one last Premier League title push at the Emirates, with a guarantee of first-team football said to be on the table — something that the likes of Real and Man City might not be able to offer.

Speculation over Mbappe’s future is sure to escalate after the teenager erased Monaco from his Twitter profile on Saturday.

13.46 BST: Reece Oxford has joined up with Borussia Monchengladbach for preseason following his loan move to the club from West Ham…

13.15 BST: West Ham may have had a bid turned down by Burnley for Andre Gray in January, but that will not stop them lodging a £15 million offer this summer, the Daily Mirror claims.

12.55 BST: Riyad Mahrez is on his way to Arsenal, according to Calciomercato.it. The website claims the Gunners will complete a deal to sign the Leicester man in the coming days…

12.41 BST: Is Hakan Calhanoglu closing in on a move from Bayer Leverkusen to AC Milan? His Instagram suggests he is…

12.25 BST: Kieran Gibbs could be set for an Arsenal exit this summer, with the Daily Mirror saying that the North London club are prepared to let the left-back go for £8 million.

12.12 BST: Jesus Navas is currently a free agent after being released by Manchester City, but Football Italia is reporting that the winger could be on his way to Lazio, with the Serie A club offering him a contract worth €3.5 million per year.

11.56 BST: With Mohamed Salah having departed Roma for Liverpool this summer, the Serie A club are on the lookout for his replacement… According to AS, the man they want to bring in is Athletic Bilbao attacker Inaki Williams, with Roma’s sporting director Monchi a fan.

11.47 BST: Werder Bremen have just confirmed that 38-year-old striker Claudio Pizarro will not be signing a new contract with the club…

.@pizarrinha will not be extending his contract at #Werder for the 2017/18 season. More to follow. pic.twitter.com/2neGqTXWaT

11.39 BST: Some breaking news from Bournemouth where Dan Gosling has just signed a four-year contract extension…

11.30 BST: Roma defender Antonio Rudiger may look to be set for a switch to Chelsea, but the Daily Mirror is claiming that Manchester City are hoping to hijack the move.

11.10 BST: Matteo Darmian will have to ask to leave Manchester United if he wants to return to Italy this summer, sources have told ESPN FC. United boss Jose Mourinho is keen to keep the defender at Old Trafford despite interest from Juventus and Inter Milan. Story here.

10.55 BST: Alexandre Lacazette is heading to Arsenal for €53 million on a five-year deal, according to Telefoot…

10.42 BST: Sky Sports is reporting that West Brom are set to sign Jay Rodriguez from Southampton for £15 million. They will pay an initial fee of £12m, with the deal including £3m of potential add-ons.

10.21 BST: Monaco boss Leonardo Jardim has spoken to RMC about Kylian Mbappe and — surprise, surprise — he wants to keep the teenage sensation at the Ligue 1 club.

“I have not spoken to him, because he knows how we work, that we want to keep him,” he said. “I think the club and he will make the best decision.” Story here.

10.05 BST: The Times has some bad news for Arsenal fans… Alex Oxlade-Chamberlain has, it says, rejected a new contract from the club and is prepared to leave the Emirates Stadium for free next summer when his current deal expires.

09.53 BST: What transfer business have Chelsea got planned for the summer? ESPN FC’s Gab Marcotti examines…

09.37 BST: Manchester United fans could be in for a treat if The Sun is to be believed. It states that Jose Mourinho wants to bring in Everton’s Romelu Lukaku — as well as Real Madrid’s Alvaro Morata.

09.22 BST: More from the Daily Mail… Arsenal have apparently told Alexis Sanchez he won’t be allowed to join Manchester City. The Gunners will not let their star man leave for a Premier League rival and want him to move abroad if he is to leave.

09.13 BST: Aleksandar Kolarov could be on his way to Turkey, according to the Daily Mail. The newspaper claims Besiktas have offered the Manchester City defender a four-year deal.

08.37 BST: More from the Mirror: Jurgen Klopp will reportedly keep Daniel Sturridge at Liverpool this summer due to concerns over the cost of a potential replacement. They were linked with Mbappe after all.

08:22 BST: While it seems all signs are pointing to Chelsea signing Antonio Rudiger from Roma, the Mirror says Manchester City are hoping to steal him away from their Premier League rivals. It cites sources close to the Germany international as saying he’d be keen to work with Pep Guardiola.

Unsettled Man City keeper Joe Hart could be a Magpie by the end of the summer, if Newcastle boss Rafa Benitez gets his way.

The Sun says that the former Real Madrid manager is keeping tabs on Hart, who is almost certain to leave the Etihad in the coming weeks.

West Ham and Watford are also circling the 30-year-old England international, but the paper says that Newcastle’s transfer team has turned its full attention to Hart now that Willy Caballero has joined Chelsea.

Metro says that the move is a sure sign that the Roma defender is on his way to Stamford Bridge, suggesting that a £33 million deal is in the works.

The 24-year-old has made 72 appearances for the Giallorossi since joining them back in 2015, and he would certainly suit Antonio Conte’s three-man backline if the transfer were to go through.

The good news doesn’t stop there for Chelsea fans. Another target of Conte’s, Monaco’s Tiemoue Bakayoko, liked the same post.

— Bayern Munich’s courtship of Alexis Sanchez continued Saturday, with Carlo Ancelotti admitting that the Arsenal star is a “great player” and he would welcome him to the Bundesliga champions — but only for the right price.

— Las Palmas playmaker Roque Mesa is edging closer to a £11 million move to Swansea City, according to the Telegraph.

— Bolton Wanderers are tracking Australia international Mark Milligan, but SBS says their hopes of a transfer could be scuttled by the Socceroos’ poor FIFA world ranking.

— Sources have told ESPN FC that West Ham United are planning to bring Javier “Chicharito” Hernandez back to the Premier League.