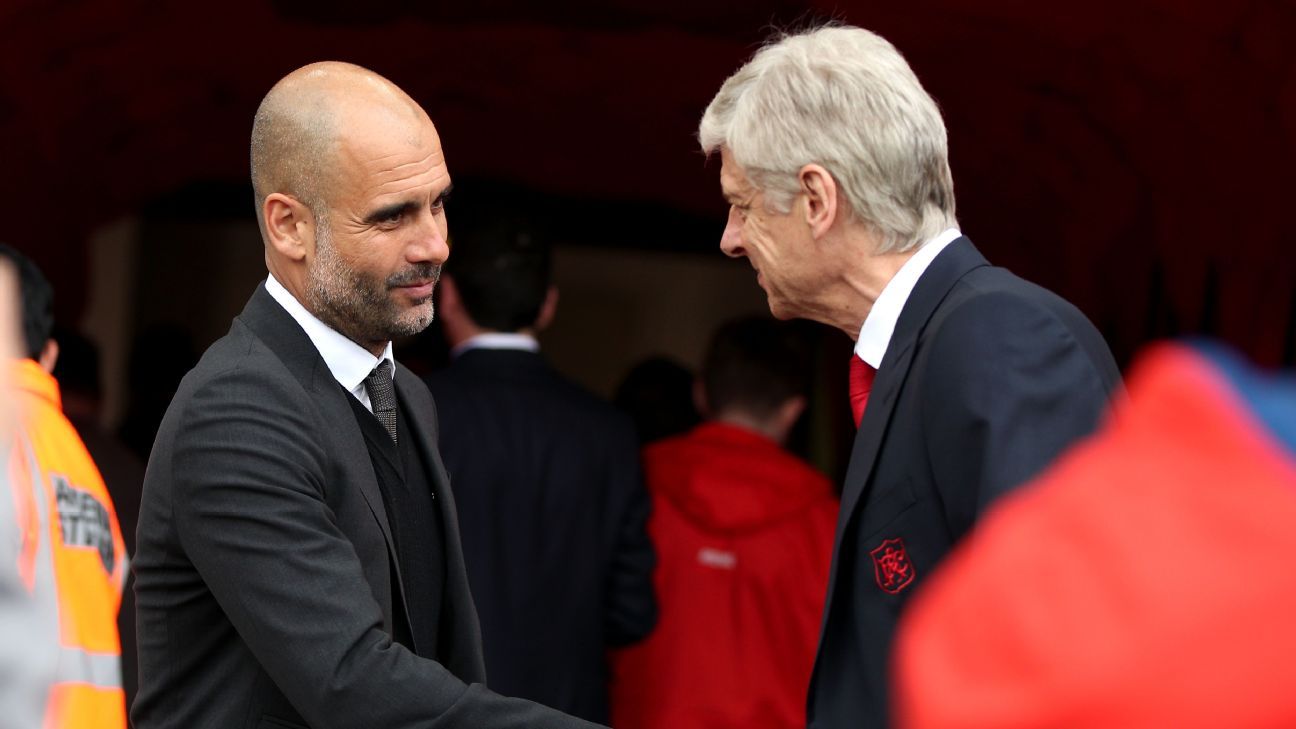 
One is a manager near the peak, and the other is some way past his. When Pep Guardiola and Arsene Wenger meet on Sunday, the comparative nature of football will be underlined. One of them will emerge as the Carabao Cup winner; history indicates that it is likelier to be Guardiola, as he possesses the better record in their meetings and has won 18 major trophies in a decade in which Wenger has just three.

The Premier League table, which shows a 27-point gap between them, suggests that Manchester City are distinctly superior to Arsenal, so perhaps the more intriguing comparison, therefore, lies with the past. Wenger was Guardiola once, importing ideas and a philosophy while bringing gleaming modernity, tactical fluidity and a willingness to challenge English football’s orthodoxies. His best Arsenal team was defiantly different. Their Invincibles ended up record-breakers; if City beat Chelsea’s 95-point tally, so too will Guardiola’s charges.

Looking at the Gunners’ side in the three seasons from 2001-04 — Wenger’s initial Double winners of 1998 featured far more throwbacks to George Graham’s era — and the City team who could potentially have a three-season arc from 2017 to 2020, offers some common denominators and examples of how football has evolved since.

Guardiola’s insistence on ball-playing defenders is a feature of his management. A decade-and-a-half before he used midfielders such as Fabian Delph, Oleksandr Zinchenko and (last season) Fernandinho at the back for City, Wenger was constructing a back four with three men initially deployed further forward.

Ashley Cole had been a striker at the junior levels, Lauren joined Arsenal as a midfielder, and Kolo Toure’s first year at Highbury came as a utility player normally selected in midfield. Cole and Lauren became the sort of attacking full-backs, advancing beyond much of the midfield, who appeared ahead of their time and whose footballing descendants have proven pivotal to Guardiola’s plans. Like Nicolas Otamendi now, Toure is 5-foot-10, short for a centre-back but playing for a manager who did not share his counterparts’ obsession with aerial ability at the back.

The same was true up front. Target men were once a staple of the English game, particularly in Wenger’s heyday. If Thierry Henry was tall enough to be one, he had other attributes: none of his 30 league goals in 2003-04 were headers. Wenger’s strongest side didn’t feature anyone resembling a conventional striker. If and when Gabriel Jesus displaces the poacher, Sergio Aguero, the same might be said of City. Guardiola’s notion that everyone has a midfielder’s skill set also applied to Wenger’s greatest team: apart from Jens Lehmann and Sol Campbell, they could have all operated somewhere in the midfield.

Both managers also brought physicality by speeding the game up: Guardiola with pressing, Wenger with acceleration in attack. However, Arsenal, unlike their successors, were often bigger than opponents. The towering Patrick Vieira was a symbol of those Gunners sides.

There was a fundamental difference at the heart of these teams. While Wenger later adopted a Barcelona-esque trio, he then fielded two essentially defensive midfielders with Vieira partnered by Gilberto Silva or Ray Parlour. Guardiola is wedded to a three but with only one holding player. Wenger had a genuine No. 10 in Dennis Bergkamp, who dropped ever deeper as he got older. Guardiola has rarely fielded a true No. 10 anywhere. Instead, at City he has “free eights” (as Kevin de Bruyne deemed himself) and David Silva.

With the nominal wide men Robert Pires and Freddie Ljungberg forever darting infield, Wenger was an anti-winger manager. Guardiola has perhaps brought English football full circle by restoring the presence of touchline-hugging players. He has stretched the game. Wenger compressed it, suiting Arsenal’s close-combination play. Guardiola has helped bring back the high defensive line. Wenger inherited it, with a back four Graham drilled meticulously to play the offside trap.

There might be an irony that Guardiola’s default shape is 4-3-3, which (implemented rather differently) was the system his antithesis Jose Mourinho used to topple Arsenal’s Invincibles. There is a case for anointing Wenger’s charges as English football’s last great 4-4-2 team: City’s subsequent title winners could also claim that title, along with Sir Alex Ferguson’s last superb Manchester United side, but they were also transitioning to 4-3-3, especially in Europe. Even though the interchanging and fluency of Henry, Bergkamp, Pires and Ljungberg meant that, at any point, they could seem to be playing 4-2-3-1 or 4-2-4-0, or, factoring in the overlapping full-backs, it was something else altogether.

Certainly Pires and Ljungberg, who were not conventional 4-4-2 players, paved the way for players such as Silva who scarcely belonged in restrictive categories of ball-winning or box-to-box midfielders, out-and-out wingers or strikers.

In short, Wenger helped extricate English football from its self-imposed straitjacket, and perhaps that makes him the greater revolutionary of the two. Certainly his finest Arsenal sides can seem like a halfway point on the evolution to Guardiola’s team from two of the defining 4-4-2 sides of the late 1980s and early 1990s: Arrigo Sacchi’s AC Milan, who definitely influenced Guardiola, and Graham’s Gunners, who almost certainly did not but were transformed by Wenger into something progressive.

That progress has now led to Guardiola’s City and Wenger, who was the future once, now seeks to strike a blow for the past by stopping them.

Switching between first and second teams not easy
‘He can’t continue at Real Madrid for one second more’
Arsenal’s Aubameyang opens up on malaria diagnosis ahead of Europa League semifinal
La Liga open investigation into Messi’s lunch with Barcelona teammates
Get to the chopper! Inside Dutch club’s helicopter parade to celebrate promotion with entire town