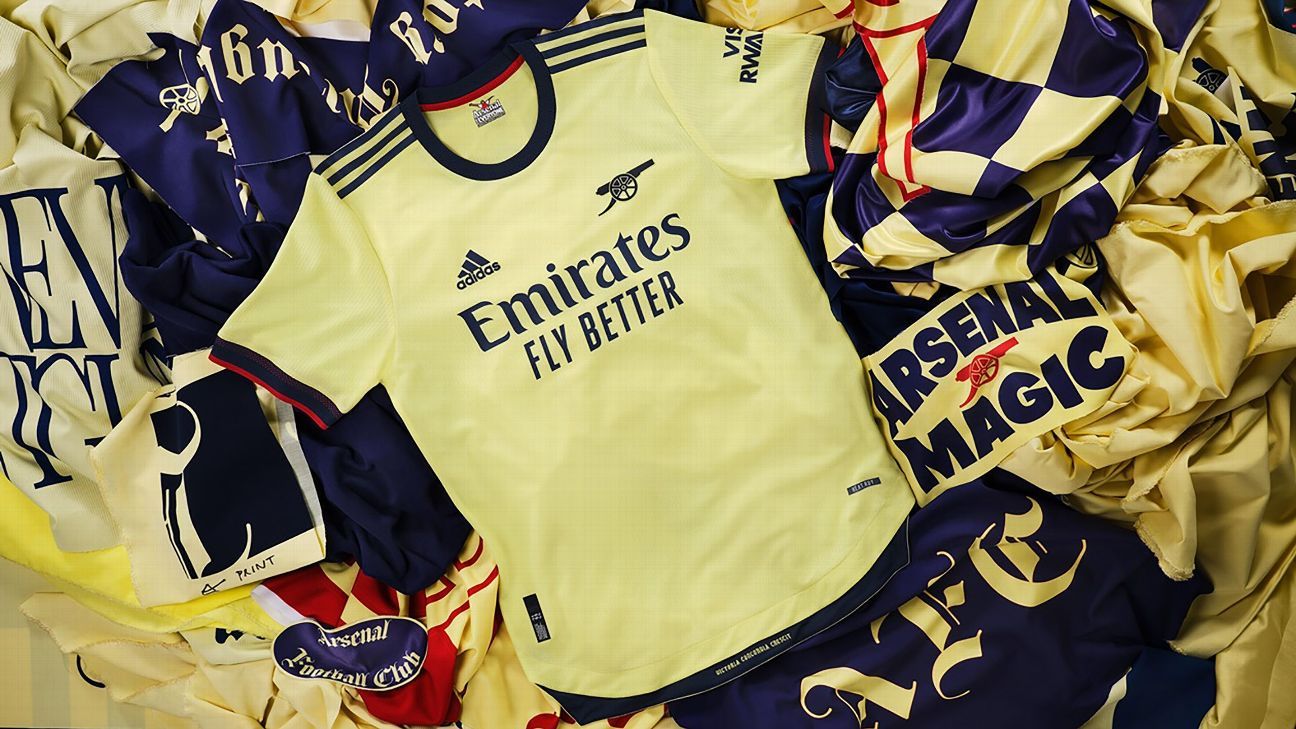 
Arsenal have unveiled their new away kit for the 2021-22 campaign, and once again the Gunners have trawled back through their past glories in search of inspiration.

The jersey marks the 50th anniversary of one of the club’s greatest ever seasons, drawing on the success of the double-winning team of 1971 and the change strip they wore to lift the FA Cup at Wembley that year.

Having already sewn up the First Division title with a 1-0 win over North London rivals Tottenham, Arsenal donned their yellow and blue kit at Wembley when beating Liverpool 2-1 to complete the club’s first-ever Double.

The final was memorable for all three goals coming during extra-time. Club legend Charlie George ultimately won the cup for the Arsenal in the 111th minute with a long-range effort which the near-exhausted striker celebrated by famously lying flat on the turf with his arms raised.


Skip forward half a century and the Gunners will once again wear pale “Pearl Citrine” (yellow) and “Collegiate Navy” (blue) shirts throughout the 2021-22 campaign.

The shirt will also feature a new interpretation of the cannon logo in place of the traditional Arsenal club crest — the first time the cannon has been in situ on the Gunners strip since the adidas uniforms of 1988-90.

The return of the cannon 💥

The 2020-21 away jersey will also bear Arsenal’s Latin motto “Victoria Concordia Crescit” (“Victory Through Harmony”) embroidered along the bottom hem, as well as the logo for their diversity inclusion campaign inside the back collar. The Arsenal For Everyone campaign marks the club’s ongoing commitment toward promoting tolerance and a sense of belonging for all people among their fanbase.

While the new away range also features a corresponding goalkeeper strip, the Gunners say that the player-issue Pearl Citrine shirt will also function as an alternative ‘keeper strip for the forthcoming season, should it be required.

Not to be outdone, Paris Saint-Germain have also revealed their new look for the 2021-22 season.

The Ligue 1 champions have created their home strip in collaboration with the Jordan Brand, with the results bearing hallmarks of Michael Jordan’s own sporting career.

With Kylian Mbappe on modelling duty, PSG debuted their new jersey which sees the famed red and white “Hechter” stripe removed from its traditional central position and instead reflected in the collar/cuff trim.

Paris Saint-Germain presents its home jersey for the 2021/2022 season, a product of its exclusive partnership with the Jordan brand! 👕💎@Jumpman23

The shirt is navy carries the iconic “Jumpman” logo for the first time while the accompanying shorts feature a diamond motif reminiscent of the Chicago Bulls uniforms worn by Jordan himself during the early 1990s.