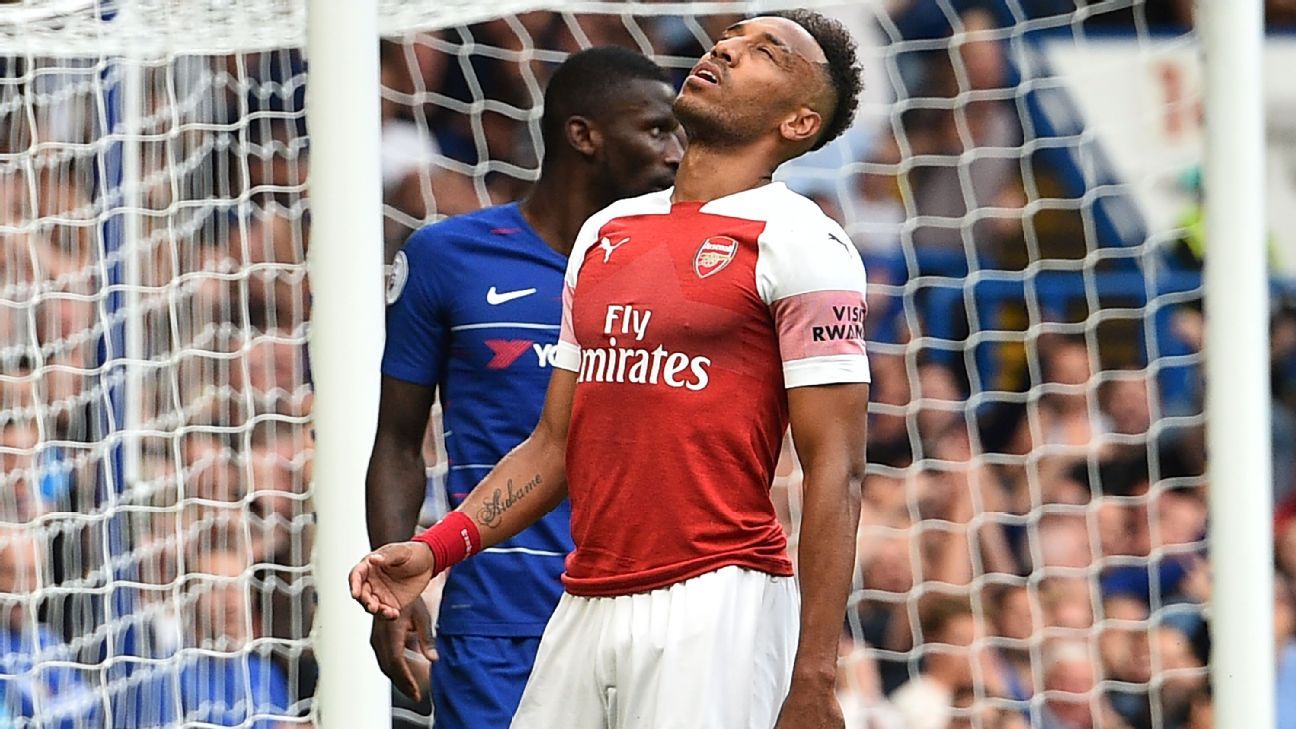 
Midway through an intriguing Premier League season, arguably the most two tactically interesting sides meet this weekend at the Emirates.

Neither Arsenal nor Chelsea are challenging for this season’s Premier League and have stuttered in recent weeks after promising starts under Unai Emery and Maurizio Sarri respectively. Assessing how the sides have adjusted to the new regimes, though, has been fascinating.

Neither Emery nor Sarri appeared a perfect fit: Emery is a tactical tinkerer, joining a club who were accustomed to “playing the Arsenal way.” Sarri is the opposite, an ideologue committed to possession football at a club fixated upon winning at all costs. It’s been something of a role reversal, and this weekend we might witness Chelsea travelling to the Emirates and dominating possession, something that has happened very rarely in the past 15 years.

Both managers have also encountered one particular problem: how to format their side in the attacking third. The past decade of the Premier League has witnessed the dominance of one-striker formations, whether in a 4-3-3, 4-2-3-1 or 3-4-2-1, but these sides find themselves without a truly effective lone striker. Therefore, Emery and Sarri have approached the problem in different ways: Emery is deploying two, while Sarri is using none.

Emery is determined to play both Alexandre Lacazette and Pierre-Emerick Aubameyang together. In basic terms, there’s no issue here; the two are good friends off the pitch, and have occasionally combined effectively on it, as was the case for Lacazette’s excellent goal at Cardiff early this season.

A literal two-striker formation doesn’t suit Arsenal, however, and therefore Aubameyang has been incorporated on the left. This isn’t disastrous, and he’s recorded excellent goal-scoring statistics, but ultimately it’s not his best role. Aubameyang played wide earlier in his career, but developed into an excellent penalty-box finisher, excellent at finding himself in the right place at the right time. Starting from the left — and, more recently, from the right — he’s less of a goal-scoring threat.

There’s also a problem with Arsenal’s link play. If Aubameyang is on the left, intent on running in behind, it means the player on the opposite flank needs to contribute heavily in terms of bridging midfield and attack. This, obviously, is exactly what Mesut Ozil excels at, but he finds himself surplus to requirements, presumably because of a personal issue between him and Emery. Without Ozil, and with Henrikh Mkhitaryan injured and Lucas Torreira not hitting the heights of his first couple of months, Arsenal lacked any kind of creativity against West Ham last weekend. Alex Iwobi is excellent at positioning himself to drag opponents out of position and playing simple passes in behind, but he’s not quite the player to bring everything together.

Too often, Aubameyang and Lacazette are disconnected from their teammates, which prompts the question of whether it’s worthwhile playing two strikers. The alternative is playing just one, which means Aubameyang, the more senior and prolific forward, getting the nod. But Arsenal’s collapse in a 5-1 defeat at Anfield showed the problem with that system: Aubameyang offers little with his back to goal, and doesn’t bring others into play in the manner of Lacazette. Should it be Aubameyang omitted instead? In tactical terms, quite possibly. But Ozil and Aubameyang are Arsenal’s best two players; if the optimum system excludes both, something’s gone disastrously wrong.

Sarri, meanwhile, has turned away from strikers altogether. Alvaro Morata’s confidence crisis meant he often wasn’t even in Chelsea’s 18-man squad, while Sarri seems to regard Olivier Giroud as a Plan B despite his fine combination play with Eden Hazard.

Instead, Hazard has been used in the central striking position. The Belgian doesn’t like this role, because he doesn’t touch the ball often enough. He doesn’t score enough goals to belong in that position, either. Intriguingly, Hazard recently said that his performance in Belgium’s 2-1 World Cup quarterfinal win over Brazil last summer was the best of his career — and he particularly enjoyed it because he didn’t score or assist, proving you can play well without contributing directly to a goal. It was a refreshing take, but probably not music to the ears of Sarri, who wanted Hazard to target 40 goals this season.

The impending loan signing of Gonzalo Higuain theoretically improves the situation. Higuain performed excellently up front for Sarri’s Napoli, scoring a record-breaking 36 Serie A goals before moving to Juventus. But Sarri’s Napoli side arguably looked better after his departure, when Dries Mertens pushed inside to lead the line, a la Hazard. Higuain has also appeared somewhat immobile in recent months, and lacking the speed that he discovered at Napoli, where he became pacier after losing a considerable amount of weight. He might be a useful penalty-box man, which is what Chelsea have desperately lacked.

This weekend, though, it will be Hazard who leads the line. And while there are imperfections in his interpretation of the false-nine role, last weekend against Newcastle he performed well, particularly for his contribution to Chelsea’s second goal, scored by Willian. Hazard came short to receive the ball, dragging Newcastle’s defenders up the pitch before elegantly turning past them and feeding the Brazilian, who cut inside and curled the ball into the far corner. It was everything you want from a false nine.

This weekend could be perfect for Hazard. Arsenal’s centre-back trio of Laurent Koscielny, Sokratis Papastathopoulos and, in particular, Shkodran Mustafi all have a habit of advancing too high out of the defensive line and finding themselves out of position. Aside from tactical fouling, it’s difficult to imagine how they’ll cope with Hazard’s change of direction, and Chelsea should be able to create goal-scoring chances at will.

This, therefore, might be the most interesting aspect of this weekend’s clash. It’s north London versus west London, red versus blue, possession versus pragmatism. But it’s also likely to be two strikers versus no strikers, as both sides compensate for their lack of a truly outstanding lone centre-forward.