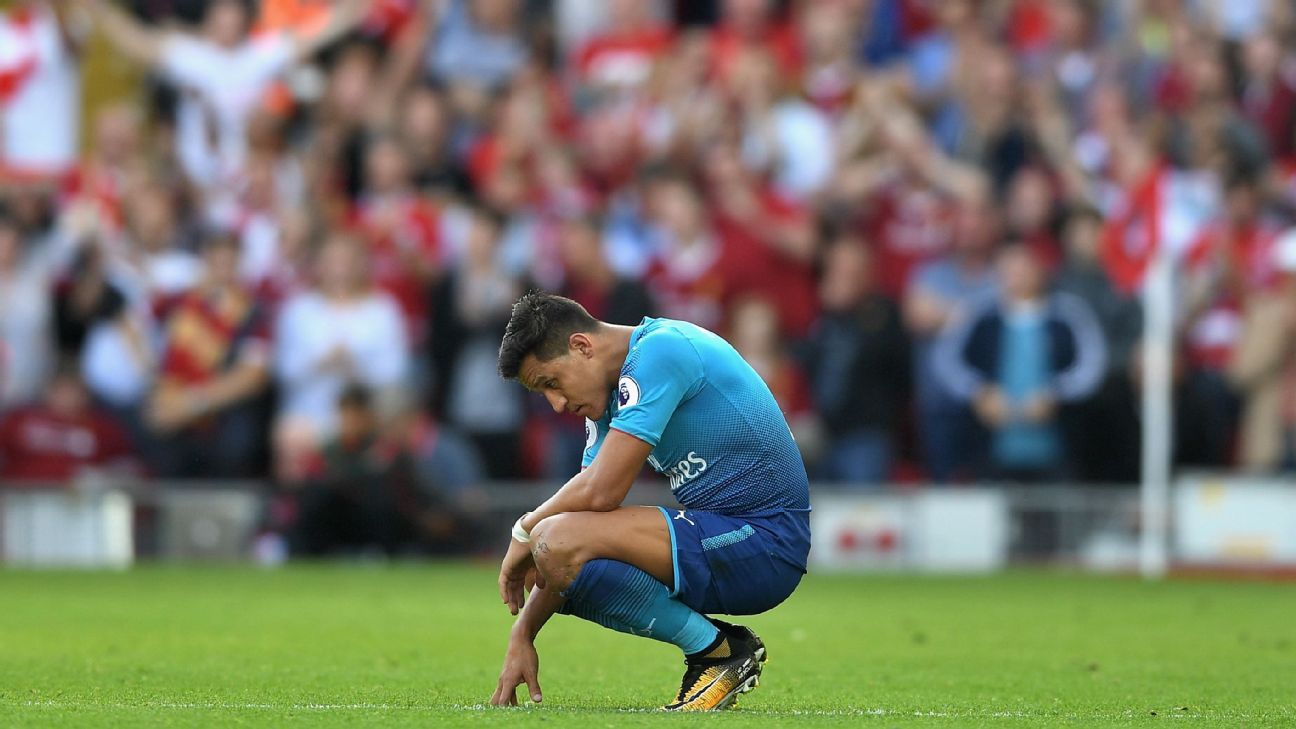 
And so, after the mania comes the lull. The transfer window closed Thursday with a day of frantic activity, but the international break means that Premier League clubs have more than a week of reflection before their summer trading policy (or lack of it) is put to the test.

Arsenal and Liverpool made headlines more for the deals they did not complete than any transactions they did make before Aug. 31. Arsene Wenger maintained throughout the summer that Alexis Sanchez would not be allowed to leave the Emirates. Despite a last-minute waver when Manchester City tried to steer the Chile international to join, Sanchez remains in north London. The forward is unhappy.

At Anfield, Philippe Coutinho was desperate to join Barcelona. Liverpool were determined to keep the Brazil international. Club owners Fenway Sports Group even issued a statement saying that the midfielder would remain on Merseyside. Despite the Catalan club’s offering mind-boggling money (reportedly almost £140 million), the overtures were rejected, and Coutinho is surely as disappointed as Sanchez.

Liverpool have been praised for their stance, but the reaction to Arsenal’s approach has been less positive. Why the difference?

Sanchez is in the final year of his contract. In January, he will be free to talk to other clubs. Next summer, it is highly likely that he will leave north London and Arsenal will not receive a fee. Arsene Wenger has spoken about the possibility that the 28-year-old will perform a U-turn and sign a new deal, but that’s improbable. Any potential new employers can use the money they would have paid Arsenal to boost Sanchez’s wages to a level that would be impossible to match at the Emirates. Sanchez cost the London club £35 million three years ago. By selling this summer, Arsenal could have recouped that fee and made a similar profit. Keeping Sanchez likely cost the Gunners somewhere in the region of £70 million.

To compound matters, Mesut Ozil is in exactly the same situation as his Arsenal teammate. He will leave next summer, too. Wenger spent £42.5 million four years ago to sign the German international, and though the demand for his services was not as high as for those of Sanchez, Arsenal will not get any return on Ozil when he leaves, either.

Coutinho is in a different situation. The 25-year-old signed a five-year contract in January. He cannot leave Anfield next summer unless the club sanction his departure. The Brazilian cost a mere £8.5 million from Inter Milan four years ago, and whenever he is allowed to join a new club, the Merseysiders stand to make a healthy profit. Had Coutinho been in the final year of his contract, there would have been no statement from FSG, who would have concentrated instead on getting the maximum cash from Barcelona.

It suited Liverpool to stand firm. They were eager to dispel any notion that they are a selling club and did not want to give the impression that the big guns of the European game could come and pick off their best players. Retaining Coutinho was a matter of strategy. They could afford to think this way because the player has such a long time left on his deal.

Alex Oxlade-Chamberlain was also in the final year of his contract at Arsenal. His £35 million move to Liverpool made sense for both parties. The big question for the London club is this: Why were three of their first-team squad allowed to enter the final year of their deal? Wenger has a history of letting this happen, with Samir Nasri and Robin van Persie two obvious examples.

Some Arsenal fans have wondered why Liverpool have not yet seen a similar reaction for letting Emre Can’s contract run down in the same manner, but the answer is simple. Sanchez and Ozil are the keystones of Wenger’s squad and were high-priced signings. The Liverpool midfielder has never really stamped his authority in the Premier League in his three years in England after his £10 million arrival from Bayer Leverkusen. Although more than a fringe player, Can is not a mainstay of the team at present. With Naby Keita arriving from Red Bull Leipzig next summer, the German international might well be surplus to requirements anyway.

Wenger has made a huge gamble with Sanchez and, to a lesser extent, Ozil. He is relying on both to be focused until next May, even though the end of their Arsenal careers is on the horizon. In January, they should know where they will be playing next year. They will also have one eye on the World Cup, but Wenger will hope his superstars can keep their minds on the job at the Emirates despite these distractions.

Liverpool have made a much smaller bet in keeping Coutinho. His value might drop if he has a poor season, but equally, if his performances dip, Barcelona might lose interest. It suits all parties for the midfielder to excel in the coming campaign. At Anfield, they expect their playmaker to improve. If he does, in a period of climbing fees, they could cash in even more next year if it suits the club.

Liverpool did not have the greatest transfer window. The failure to secure a central defender and a dynamic midfield player for this season might come back to haunt them. Meanwhile, Arsenal looked like a club lacking direction, and keeping Sanchez could prove to be a significant and costly error. On Saturday against Bournemouth, we will begin to see whether Wenger’s gamble will pay off.