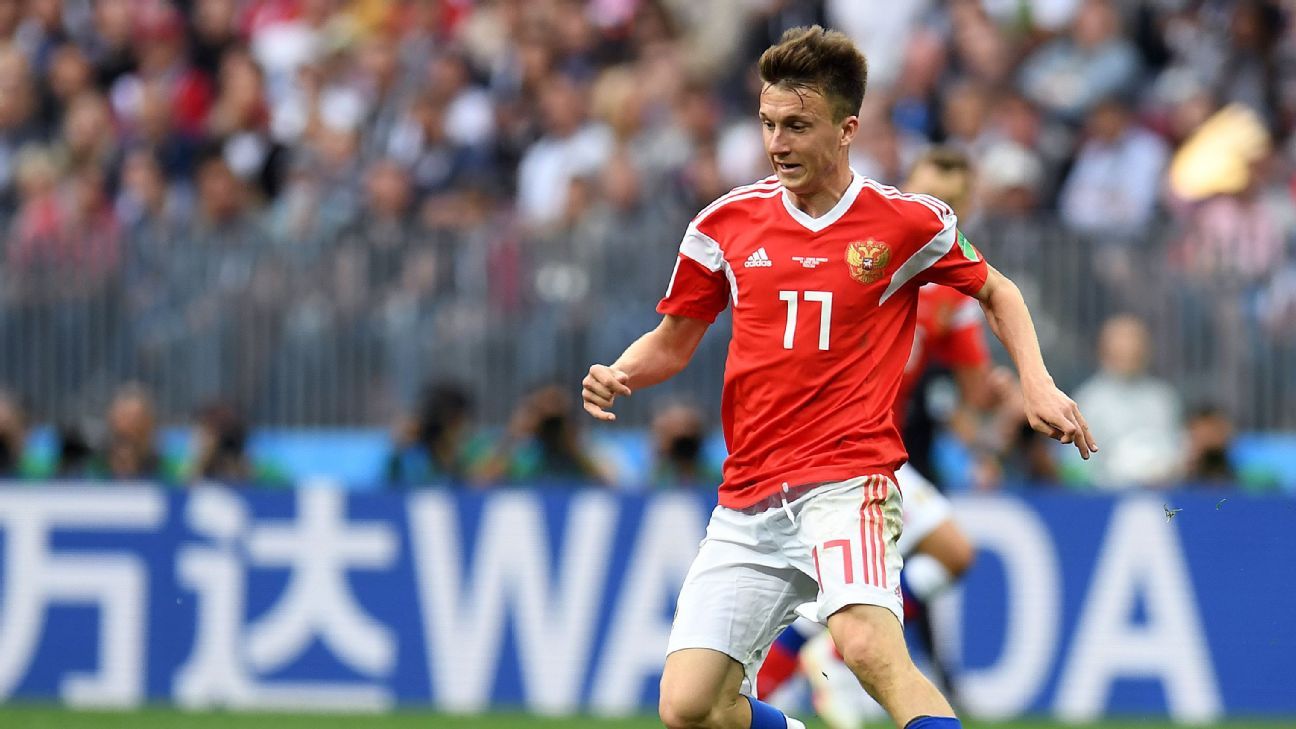 
The last time Arsenal signed a twinkle-toed Russian who had commanded the world’s attention with his breakout performance at a major tournament, they had to wait 228 days, into the depths of winter, to finally get him. Even then, the capture of Andrei Arshavin was only confirmed after a snowstorm that delayed the deal until 23 hours after the 2009 winter transfer window closed.

If, 10 years on from Arshavin’s virtuoso tournament at Euro 2008, Arsenal are indeed in the market to sign a player who is assuming a similar stature for Russia, it is unlikely they will be able to wait so long to recruit Aleksandr Golovin. After his opening performance at his home World Cup, his agent will not be short of phone calls this week.

Arsenal cannot be accused of being bandwagon-jumpers if they do step up their interest in the delicate 22-year-old playmaker after he contributed two assists and a gorgeous free-kick goal to Russia’s emphatic 5-0 win over Saudi Arabia on Thursday. Arsenal have been credited with an interest for months now, even before Golovin struck a similarly gorgeous free kick in CSKA Moscow’s 4-1 loss at Emirates Stadium in the Europa League in April.

After an impressive performance from Golovin in the return fixture, and with Arsenal safely through, then-manager Arsene Wenger let his guard down and showed his admiration for the man who had just run rings around his midfield. “I would say Golovin is a very interesting player,” Wenger said. “He had an outstanding game tonight again. But at the moment we are not in transfer mode.”

Now, emphatically, they are. Wenger has gone but Sven Mislintat remains and he has to complete all his summer transfer work, with the approval of head coach Unai Emery, by the truncated deadline of Aug. 9 this year. With the World Cup eating up five weeks, it leaves previous little time to get everything done.

Arsenal also face added complications with Juventus said to be very interested in Golovin after watching him take apart an admittedly awful Saudi Arabia side. Manchester United manager Jose Mourinho has been speaking of the player in admiring tones and Chelsea are said to be keen too. The scene is beginning to resemble the final aisle of an understaffed co-op.

The World Cup is a boon for the transfer rumour industry, and who knows for sure if Golovin is on the wanted list at Arsenal. It is clear, though, that Arsenal do not really possess a player of his profile and Golovin would give Emery an extra dimension in attack.

Arsenal can hardly claim to have been starved of pint-sized playmakers in recent seasons, but Golovin doesn’t neatly conform to the stereotype. He is that kind of sinuous, technical player who can play a neat pass, but his armoury also includes a genuine threat from free kicks — and on the evidence of Thursday at least, a threat from crosses too.

The latter is something Arsenal have lacked for some time. Olivier Giroud suffered from a lack of decent aerial service and one wonders how he would have thrived with a steady supply of the kinds of deliveries with which Golovin assisted Yuri Gazinsky and Artem Dzyuba for headed goals against Saudi Arabia. It isn’t exactly a trademark of Golovin’s play, but Arsenal may have taken note.

The former is a weapon Arsenal no longer possess since selling Alexis Sanchez to United in January. Arsenal have scored six direct free kicks since the start of 2013-14: Sanchez scored five and Mesut Ozil has one. The last player who scored a direct free kick for Arsenal and wasn’t a striker was Mikel Arteta back in 2011-12.

With Sanchez going, an element of threat has been lost from set-piece situations. It’s only a marginal gain, admittedly, but an extra couple of goals a season from free kicks could come in handy. Golovin has shown in the Europa League and the World Cup that he has this rare ability.

If Jack Wilshere departs as expected, then there is a clear vacancy in midfield for someone who can use the ball intelligently and play through the lines, and if there are added extras in the bargain then even better. Golovin may fit the bill for Arsenal — they just can’t afford to wait around this time.