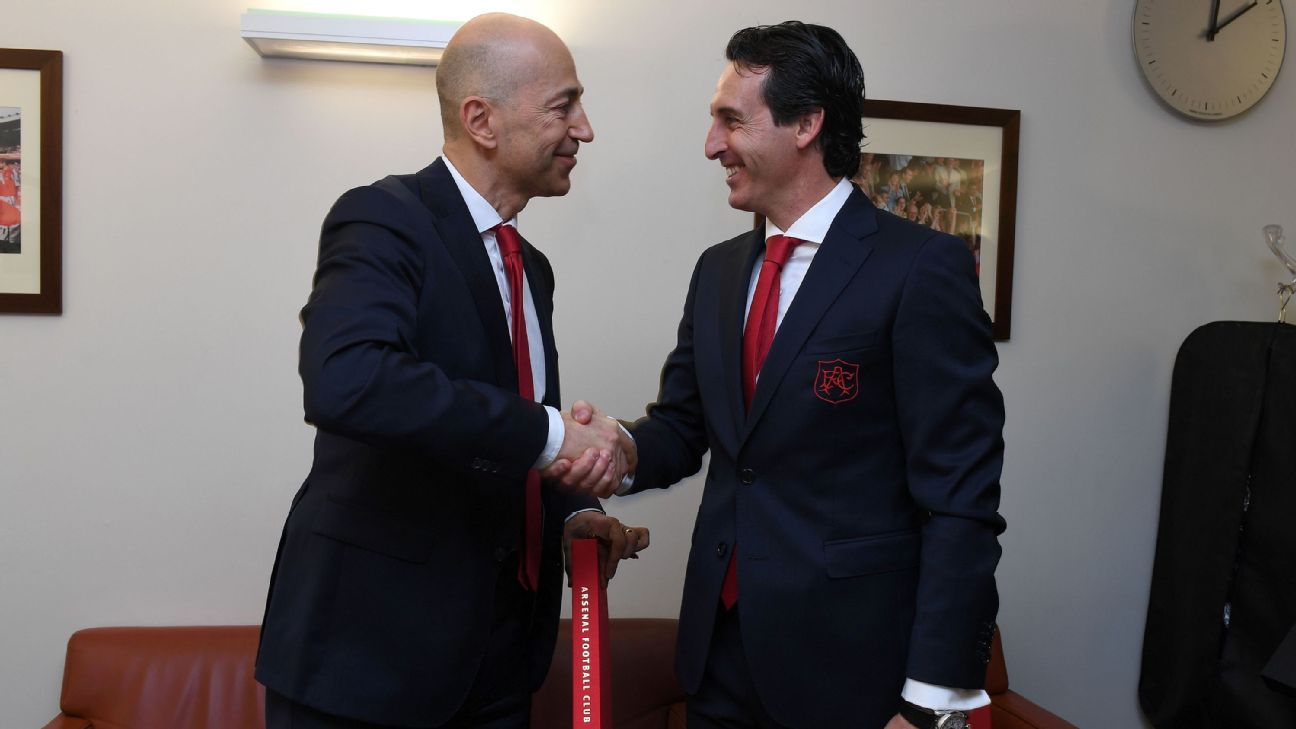 
LONDON — Arsenal coach Unai Emery told a news conference that he is still in the dark about whether chief executive Ivan Gazidis plans to join AC Milan.

Gazidis has yet to announce his intentions after being courted by Milan for several months, and Emery said he still does not know whether his boss is set to leave the club — even though they still speak regularly about club matters.

“Every conversation with me [and Gazidis] is speaking about us [Arsenal]. About our performance, about our ideas, our process,” Emery said on Thursday. “Then for his future, we didn’t speak. And I think it’s one question for him. … I don’t know any other news from him.”

Gazidis led the process of hiring Emery in May after Arsene Wenger stepped down as Arsenal manager but is now wanted by Milan’s new owners, the Elliott Management hedge fund.

Emery, meanwhile, is staying focused on Saturday’s trip to Newcastle when the Premier League returns following the international break.

It was the first since Mesut Ozil made himself unavailable for Germany selection and Emery is hoping the playmaker will benefit from the extra rest and training sessions.

“The players have the habits to play in the international break, in important matches, defending their identity, and when one player is finishing that, I think it is also good for them to focus only on their team,” Emery said.

“This focus every day with us, a relaxing three days off at the weekend. Mesut, like other players, works very well here and also working together to improve things. Mesut, I look at him with the focus totally here.”

Emery also said he gets along “very well” with Ozil after he had to deny reports of a rift between the two last month when the midfielder missed a game due to an illness.

And he also denied another report from this week claiming that he had ordered the Emirates Stadium groundsman not to water the pitch ahead of the season-opening game against Manchester City to help thwart the visitors’ slick passing game.

“It’s not true,” he said. “This is the moment to say to you that I have a good relationship with Mesut and I didn’t say to the groundsman not to put water on the pitch, it’s not true. We are continuing our process with our positive things and our work.”

Emery did confirm that the club are in talks with Nacho Monreal about a new contract, and said he wants to see the full-back stay at Arsenal after his current deal expires next summer.

“After two months I can say that I am very happy with him, because he is 32 years old but I think physically, with his performances with us in matches, he is playing with a very good level,” Emery said. “For me it is very important, I think we need to find a new contract with him to stay with the Arsenal team.”