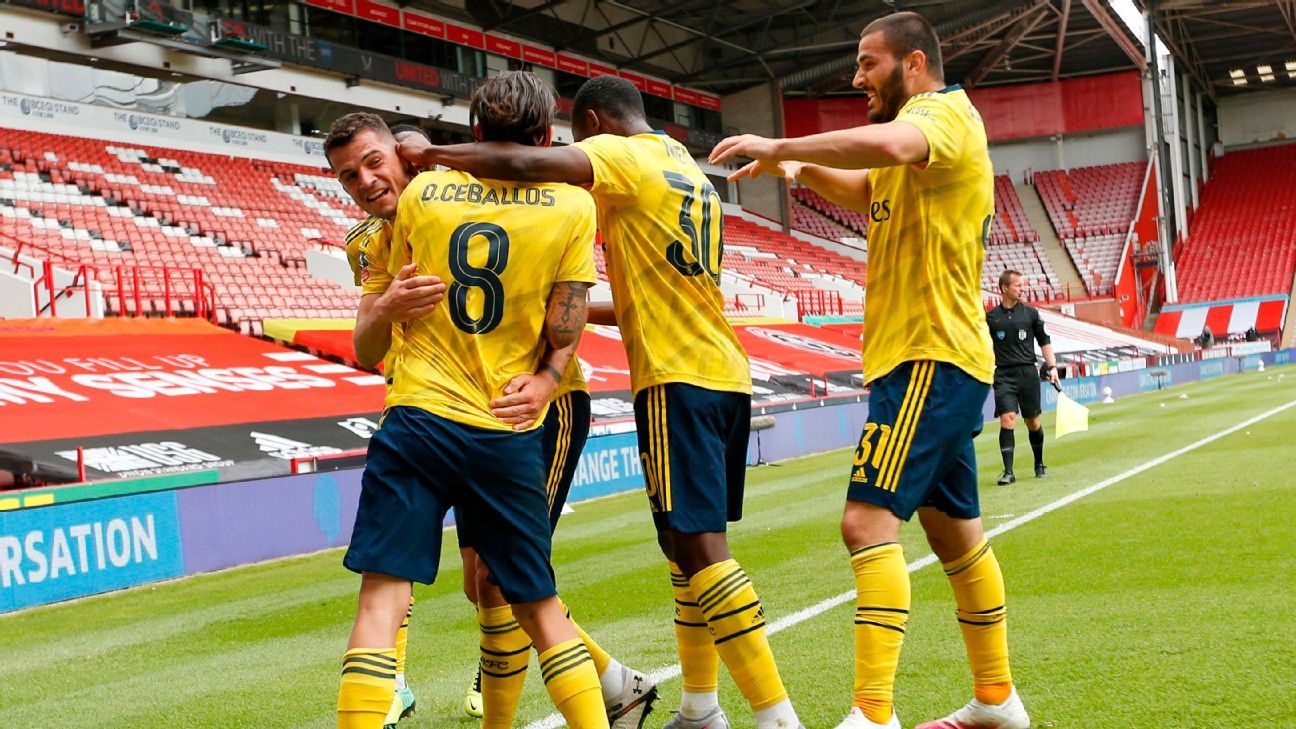 
It is open to debate as to whether the FA Cup has been a blessing or a curse for Arsenal in recent years. But after reaching the semifinals for the 30th time on Sunday, following a dramatic late win at Sheffield United, the sense of the competition giving the Gunners the opportunity to paper over the cracks was inescapable once more.

Clearly, winning is always better than losing, no matter what state a club finds itself in, and manager Mikel Arteta will find plenty of positives from the 2-1 victory at Bramall Lane that was secured by a stoppage-time winner from Dani Ceballos, four minutes after David McGoldrick’s equaliser looked to have taken the game into extra-time. Arsenal showed resolve and determination to bounce back from McGoldrick’s goal and, for lengthy periods of the second half, their makeshift defence had to withstand heavy United pressure defined by long balls into the towering centre-forward Oli McBurnie. There were also some spirited performances from youngsters Joe Willock, Bukayo Saka and substitute Eddie Nketiah, prompting Arteta to praise his team’s result.

– Stream FA Cup games on ESPN+
– What did you miss? The latest from Europe’s top leagues
– Soccer is back! Stream ESPN FC Daily on ESPN+ (U.S. only)

“This is a difficult place to come and get a win,” he said. “I am really happy with the attitude and performance of the players. The FA Cup is a great opportunity to try and win a title and play in Europe.”

But it would be foolish of anyone connected to Arsenal to regard this victory as proof of light at the end of a long tunnel for a team, and club, that had lost its way years before Arteta returned as manager in December. And success in the FA Cup is part of the reason why Arsenal are now attempting to emerge from a malaise that has been holding the team back for longer than anyone cares to remember.

Back-to-back victories in the FA Cup final in 2014 and 2015 — against Hull City and Aston Villa, respectively — gave Arsene Wenger the mandate to extend his stay as manager, despite clear signs that the Frenchman had past his use-by date at the Emirates. And it was the same story in 2017, when a 2-1 victory at Wembley in the FA Cup final prevented Chelsea from sealing a League and Cup double. Three days later, Wenger signed a new two-year contract as manager, despite many fans wanting his seventh FA Cup win to act as a glorious farewell rather than justification for an extended stay.

Winning silverware is the primary objective for every club, especially clubs as big and historic as Arsenal, but it can sometimes shift the focus away from harsh realities.

It is obviously a contradiction, because no club can ever regard success as a distraction, but Arsenal are a club that trades in league titles — only Manchester United and Liverpool have won more in England — and today, just as in 2014, 2015 and 2017, they are a million miles from competing for the biggest domestic prize. But those three FA Cup wins prevented Wenger and Arsenal from performing the major surgery that was required at the time and it is a mistake that Arteta cannot repeat, even if the Spaniard guides the Gunners to their 14th FA Cup this season.

Sunday’s victory in Sheffield exposed more negatives than positives for Arteta to deal with, and this FA Cup run cannot be allowed to blur the truth for the new manager.

Defensively, Arsenal were shambolic at times. They were fortunate not to go behind when John Lundstram’s first-half header was ruled out for offside after the back four failed to deal with an aerial ball into the penalty area — an inability to cope with set pieces has been a recurring theme dating back to the Wenger era. And while Rob Holding’s introduction as a second-half substitute in place of the injured and error-prone David Luiz provided some height and organisation, there were still moments when panic set in whenever the ball drifted into the Arsenal box.

Arsenal’s midfield lacks players with the ability to control the pace of the game and that is an area that Arteta must prioritise when, or if, he gets the opportunity to rebuild and strengthen at the end of this season. Arteta can no longer rely on the contribution or fitness of Mesut Ozil, who missed the game because of a “slight back injury,” and he is likely to lose one, or both, of his main strikers — Pierre-Emerick Aubameyang and Alexandre Lacazette — once the transfer window opens.

Inconsistency remains an issue throughout the team, although Arteta’s intensity should help focus minds more sharply and, to that point, both Kieran Tierney and Nicolas Pepe, who opened the scoring from the penalty spot in the first half, have been much improved since the restart of action earlier this month.

Arteta appears to have a grasp on the challenge ahead and the time it will take to turn Arsenal around, but success in the FA Cup may convince others, perhaps those who sign the cheques, that things are better than they actually are. Arsenal have made that mistake too often in recent years. They can’t afford to do that again.