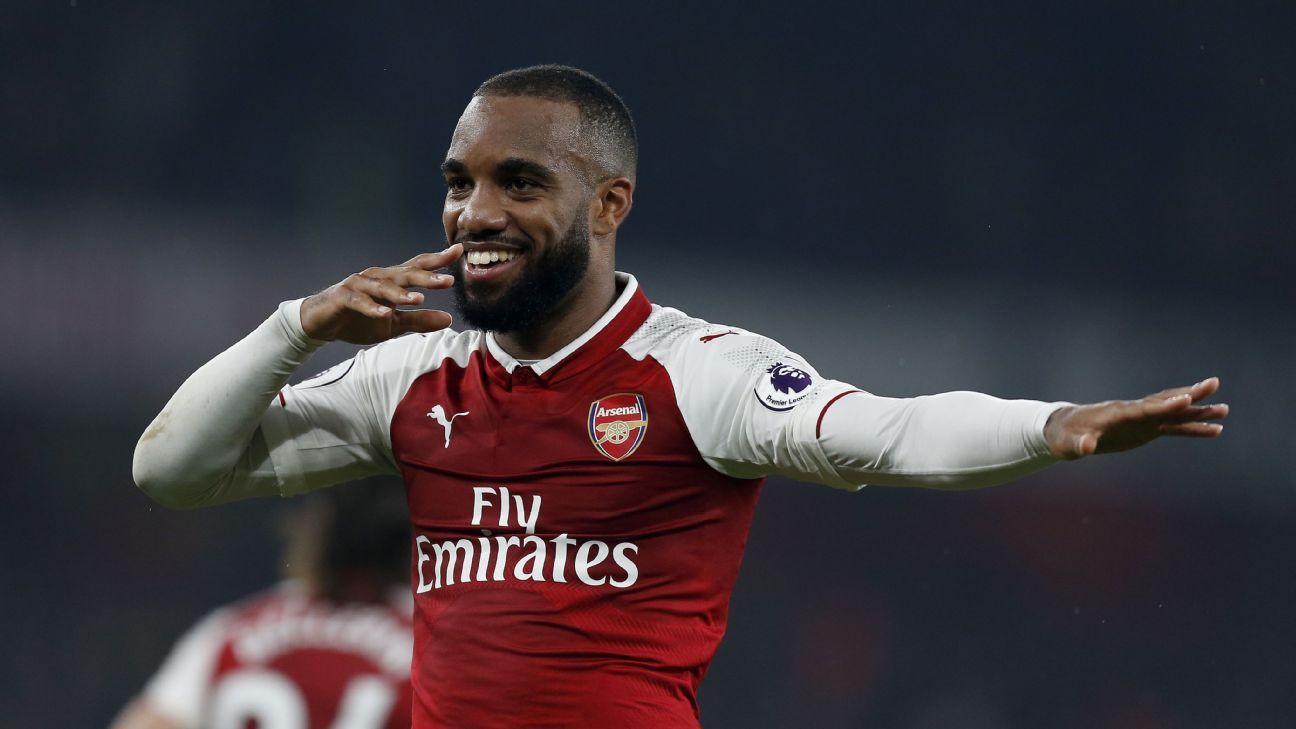 
In any other season, Alexandre Lacazette’s start to life at Arsenal would see him hailed as a bright new star of the Premier League. Four goals from his first six Premier League games is a very decent record, especially when you factor in that he was unjustly robbed of a superb strike at Stoke by a controversial offside decision. However, Lacazette has been overshadowed by the extraordinary goal scoring exploits of Manchester United’s Romelu Lukaku (seven in seven) and Chelsea’s Alvaro Morata (six in seven).

Arsenal fans should not be too concerned, though. The indications are that Lacazette has the potential to significantly improve on his positive start.

Lacazette, though, has spoken openly about the need to acclimatise to the tumult of the English game, admitting: “I’ll have to be stronger with my back to goal. In England, the referee doesn’t blow his whistle”.

In an apparent attempt to manage that transition, Arsene Wenger has been cautious with his €53 million record signing. The manager left him out of the match against Liverpool, and has withdrawn him at around the 70-minute mark in five of his six Premier League starts so far.

Wenger’s circumspection has begun to irritate the Arsenal fans, who would like to see Lacazette given the opportunity to test himself for the full 90 minutes. It certainly hasn’t escaped their attention that Lukaku scores many of his goals late on in games, and by bringing Lacazette off early it stops the Frenchman exploiting tiring defences.

It also interrupts Arsenal’s flow. Arsenal were playing some attractive stuff in the recent 2-0 win over Brighton, until Wenger decided to replace Lacazette and Alex Iwobi with Olivier Giroud and Theo Walcott. From that point on, the Gunners lost their way. What could have been a hammering instead became a humdrum affair.

Wenger will accept that trade off. He is presumably sparing Lacazette now in the knowledge that greater tests lie ahead. It might be frustrating for the fans to want to see their record signing in action as much as possible, but the Premier League season is a marathon and not a sprint. Taking Lacazette off regularly is a compliment: it’s an indicator that Wenger regards his fitness as paramount to Arsenal’s hopes of success.

The Gunners boss must also recognise that Arsenal and Lacazette are not yet completely in tune. While Lacazette had the odd positive moment against Brighton, there were countless occasions when he spun in behind the defence only to be ignored by his teammates.

Every time Granit Xhaka or Aaron Ramsey pick the ball up off the back three, Lacazette makes a telling run towards goal. More often than not, he is left frustrated when the pass is played short, or sideways, instead.

That’s a consequence of this Arsenal team having grown accustomed to playing with Giroud, who rarely looks to dart in behind. Xhaka, in particular, should watch a few videos of the way Emmanuel Petit used to release Nicolas Anelka from deep and take note. Thus far, we’ve seen Lacazette primarily as a penalty box poacher, but that’s only half his game. Once Arsenal learn to exploit his speed and movement, he will provide a broader and greater threat.

Lacazette has done most things well so far — perhaps he just hasn’t quite done enough. That’s partly due to his peripheral style of play, but is also an inevitable symptom of the process of adaptation at a new club, a new league and a new country.

He may have hit the ground running, but the feeling persists that it’s merely a matter of time until he starts sprinting. For Arsenal fans, after a stuttering beginnin to the Premier League campaign, it’s thrilling to think there is more to come from their new star striker.