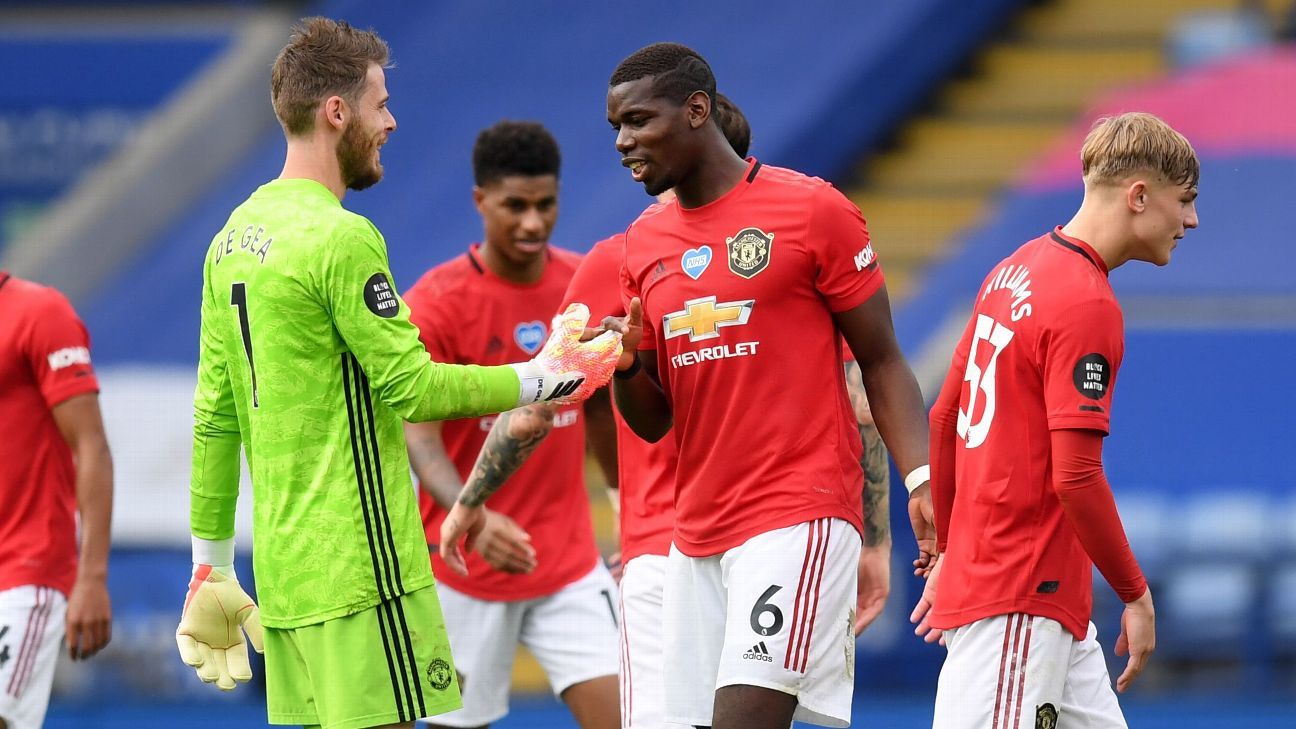 It is now seven years since Manchester United last won the Premier League title and, in the post-Sir Alex Ferguson era, it has been a story of chop and change both in terms of managers and players at Old Trafford.

Now United finally appear to be headed in the right direction, after making the bold decision to clear out some big names and high earners 12 months ago to promote youth and adopt a more strategic recruitment policy under Ole Gunnar Solskjaer. But the 20-time champions still have a gap to close on the likes of Liverpool and Manchester City, and this summer could see more players leave United than arrive.

With that in mind, Gab Marcotti and I have performed a player-by-player assessment of the squad, attempting to bring clarity to United’s squad-strengthening options. Where you see a simple “Keep,” you can assume we agreed and there wasn’t much to talk about. Otherwise, we weighed in with our comments.

It’s not just about performance, either. It’s about age, wages, personality fit and contract length (we went with Transfermarkt for contract expiry dates for consistency). And there will be moving parts, too: departures or arrivals that cause chain reactions, sometimes unexpected.

Note: Several United players have contracts that include the option of a further year on expiry. For consistency, all contracts below relate to the primary year of expiration.

OGDEN: He is on a long-term contract and there is no obvious destination for him, but if they can replace De Gea with a world-class keeper like Atletico Madrid‘s Jan Oblak then they should because he is clearly in decline.

OGDEN: He won’t want to sit on the bench, after returning from a successful loan at Sheffield United, and damage his chances of being England‘s No. 1 at Euro 2020. But at 23, he is not ready to be United’s first choice.

MARCOTTI: Bring him back, extend his contract and show your commitment to him. Pit him and De Gea against each other for the starting job, with the loser getting domestic cups. He’s got to know he has a potential future, otherwise he won’t extend his deal.

OGDEN: If he had any ambition, he’d have gone by now. Five years as a No. 2 says everything. I’d keep him, let him run his contract down and leave as a free agent next summer.

MARCOTTI: Dump. If you bring back Henderson, you don’t need him. You can get a couple million for him.

MARCOTTI: Keep as third choice if you can shift Romero.

MARCOTTI: He had his first season as a starter at Hearts, he’s still young and you should be able to get a few million for him.

Gab Marcotti details who he believes is to blame for Manchester United’s loss to Sevilla in the Europa League.

OGDEN: You keep him, not because he is reliable but because United have a lot of centre-backs to shift and he offers more than most of them. He’d be no higher than fourth choice in most big clubs.

MARCOTTI: I agree he’s not great, but he is more suited to a back three than the other defenders at the club, so you keep him for that reason.

OGDEN: Despite all his injuries, there is a player in there. He has pace and aggression. There is also interest from Spain and Italy, so United may regard him as a means to raise funds.

MARCOTTI: He’s always injured and on big wages. I think you would struggle to get decent money for him, given his injuries. Sell if you can, but that may be difficult.

OGDEN: He’s become a better player on loan at Roma, and United need a reliable, experienced centre-back alongside Maguire, so it would be foolish to let him go. After Maguire, he is the best centre-back at the club.

MARCOTTI: If he sees no path back into the starting XI and wants to go, then it’s best to cash in now. He had a great season at Roma and, with new owners in place, you can get as much as £15m for him.

OGDEN: United have tried and failed to get rid of him for years. His wages always become the problem. If Argentine side Estudiantes want to extend his loan, let it happen.

VERDICT: Dump if you can, otherwise loan again

VERDICT: Keep, but no need to extend yet

OGDEN: After nine years at the club, he needs to move on.

MARCOTTI: Ideally you let him go for his own good, but given his wages and the coronavirus pandemic, I don’t know who takes him. Maybe loan if you can.

OGDEN: He’s never fit and has started just 24 games in two seasons. Hasn’t shown anything to suggest he can be a regular, so I’d move him on.

MARCOTTI: I’d take the hit and sell. It seems that Solskjaer doesn’t rate him anyway. The problem is his fitness record — you may need to loan before selling him.

OGDEN: A month ago. I’d have said sell, without question. But he has been given a chance and offers cover in both full-back positions, so probably worth keeping as a squad player.

MARCOTTI: I like his versatility, so I’d keep him. You can’t take a chance on extending in January, so I’d extend now.

Steve Nicol believes Paul Pogba wants to succeed at Man United and now has enough players around him to do so.

MARCOTTI: Loan him out, see if he can play.

OGDEN: Keep and extend his contract. Prior to the pandemic, both he and United were preparing for a summer transfer, but his fee and wages mean that is now pretty much impossible. So a new deal suits both parties.

MARCOTTI: I think he’s grown since returning to fitness. Extend his contract now, but if he has a good Euro 2020 and leaving becomes an option, assess the situation then.

OGDEN: He has made such a big impact since arriving in January that I would expect him to get a new deal within the next 12 months to reflect his contribution.

MARCOTTI: He played when United were short of fit players, but didn’t measure up, so there is no need for him to stick around.

OGDEN: I really feel for Mata. He has endured six years of United being in a mess, suffered as a flair player under David Moyes, Louis van Gaal and Jose Mourinho and, despite it all, never complained. He barely plays now, so United should let him go for a nominal fee as a reward for his professionalism.

MARCOTTI: Let him decide. If he wants to go, let him go, but there would be nothing lost if United kept him as a creative attacking player. I’d let him go for free. He’s been a good servant to the club.

OGDEN: I don’t think he’s one for the long term, but he gives you depth in attacking areas.

OGDEN: I’m in a minority with Lingard — he’s had a bad year, but he adds something in the attacking third and I’d persevere with him. Tell him he has a season to save his United career and see what happens.

MARCOTTI: He’s been poor for a long time, but he’s another body and you don’t need to make a decision on him because he has the option of another year on his contract.

OGDEN: Extend him now. Reward him for his incredible season and don’t get to the point where the player feels his development has not been recognised.

OGDEN: He had a brief flourish, justified his signing and silenced his critics. But he’s a stop-gap and nothing more than an emergency centre-forward.

MARCOTTI: I agree. United need another striker for the longer term, but it’s not him.

VERDICT: Keep until his loan deal expires in January.

Due to the financial impact of the pandemic, United will do well to raise £45-50m through player sales, but they will also clear some sizeable earners from the wage bill so that will enable Solskjaer to add three or four new signings. That process started with the exits of Romelu Lukaku, Alexis Sanchez, Matteo Darmian and others last summer, but the clear-out must continue this time around.

Jadon Sancho is the priority signing. United have targeted a right-sided attacking player since last summer and the Borussia Dortmund winger ticks that box, but he really should be the cherry on top of the cake. The problem is that United are putting all their efforts into the cherry rather than baking the cake right now. If they don’t sign Sancho, they will need to recruit another attacking player instead — maybe Jack Grealish, James Maddison or Donny van de Beek — because their creative options will be stretched if Mata leaves.

The Europa League semifinal defeat against Sevilla highlighted the need for greater depth and quality in all areas, so United really need to upgrade their options at full-back and at centre-back. They also need a strong, proven defensive midfielder because Nemanja Matic’s age and Scott McTominay’s inexperience means Solskjaer can’t rely on either to play 38 league games.

United are strongest in attacking areas, both up front and in terms of their creative midfielders — although an upgrade in Ighalo would not be a bad thing — but the focus should really be on tightening everything up in the defensive third.

However, previous windows have shown United to be unpredictable when it comes to targets. Last summer’s late and unsuccessful moves for Juventus‘ Paulo Dybala and Tottenham’s Christian Eriksen highlight their tendency to change direction on a whim, but they need to be more strategic this time around. Having already missed out on Birmingham City teenager Jude Bellingham, who rejected United in favour of Dortmund, the club are already playing catch-up in what is another crucial summer window.