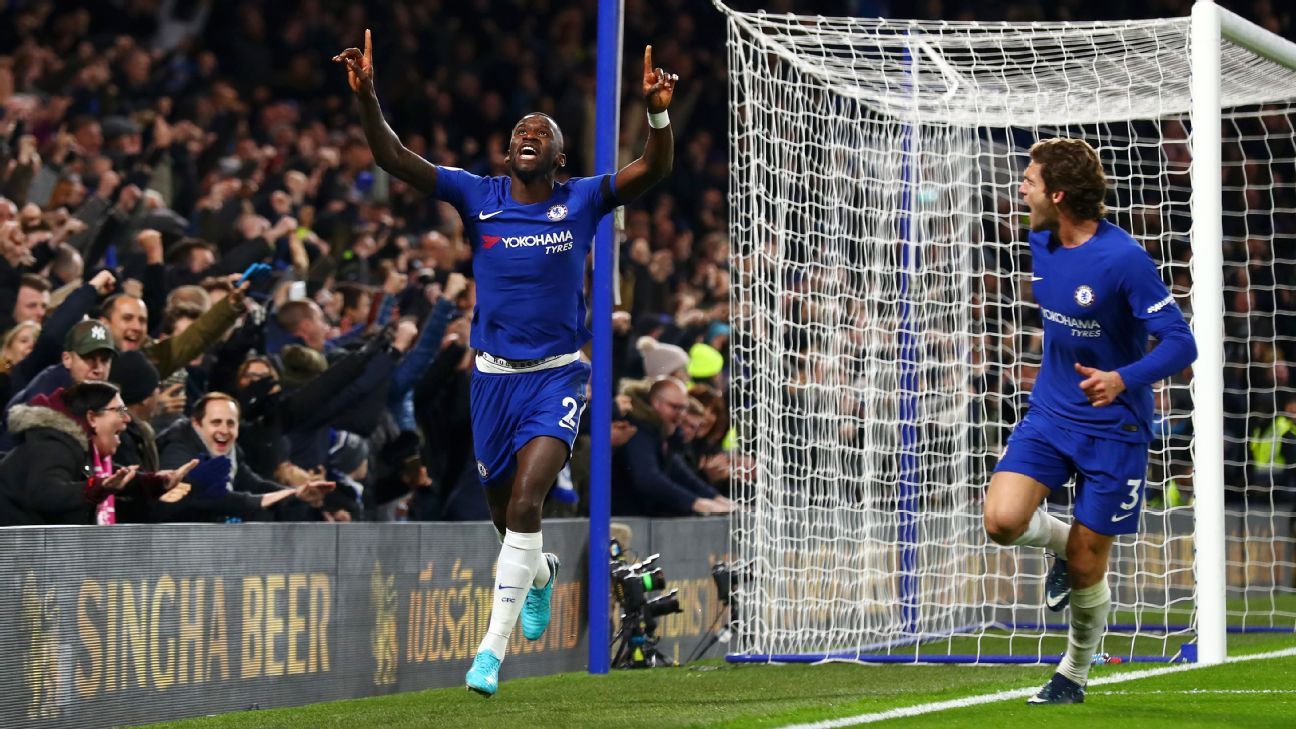 
LONDON — When he signed for Chelsea in a £34 million deal last summer, the only real fanfare that greeted Antonio Rudiger’s arrival at Stamford Bridge was the announcement video that unveiled him in the back room of the club shop and quickly went viral on social media.

Antonio Conte’s top central defensive targets in a window of setbacks had been Leonardo Bonucci and Virgil van Dijk, while many supporters preferred to see Nathan Ake or Kurt Zouma given a chance to grow into the first team.

But it didn’t take long for Rudiger to change the mood. Even in a disastrous opening-day defeat at home to Burnley, his passion and no-nonsense style made an impression, and within a month it was normal to hear his name sung after every firm tackle and interception at Stamford Bridge.

Two seasons of Serie A football with Roma, disrupted only by an ACL tear, proved the perfect preparation for life at Chelsea and working under Conte.

“I think maybe that helped me adapt quicker, because of the tactical aspect,” Rudiger, speaking this week to promote Chelsea’s launch of a sensory room designed to enhance the enjoyment of families with children with additional sensory needs at Stamford Bridge, told ESPN FC.

“In Rome we used to play sometimes four [in defence], sometimes in a back three. It depends who you play against. But it is always different — all coaches have their own way of playing or thinking and you have to adapt.”

Conte has made full use of Rudiger’s versatility this season, deploying him as a replacement right-wing back early on and then shifting him from the right of the back three to the left, where his consistent form and superior athleticism displaced club captain Gary Cahill. The Germany international’s raw speed and strength have made him a valuable asset in fast and frantic Premier League matches, but English football has also posed its challenges.

“The way the game is here — it’s more open, so you have to always be aware,” he added. “I think physically you have to be ready, but also in your head, mentally.”

The unique and gruelling festive schedule has also been a particular shock to the system.

“For me this year to have this experience, [playing on] Boxing Day and then January, that’s tough,” he admitted.

Rudiger is as businesslike off the pitch as he is on it, responding to questions with thoughtful but sharp, concise answers. It is a demeanour that appeared to land him in trouble with Conte last month when, having criticised the team’s approach against West Ham during a postmatch TV interview, he was omitted from the Italian’s next match day squad to play Southampton.

The moment quickly passed; Rudiger was restored to the team for last Saturday’s 1-0 win over Swansea City and there is no sense of any lingering issues between the defender and Conte.

“The way he works is professional, and that’s good,” Rudiger said of his head coach. “For me it’s OK, because he does his work and he puts his all [into it] — I think you can see that on the sideline. That’s it, and the players have to do that as well. It’s a professional relationship and that’s good.”

When it comes to the constantly discussed subject of Conte’s future at Chelsea, the Germany international is matter of fact.

“I’m not taking part in this decision,” he replied simply. “It doesn’t matter [what I think] — if he is my coach next year he is my coach and I’ll work with him.”

Yet there is more to Rudiger than the stoic professional. He is a lively dressing room presence who is just as popular at Chelsea now as he was at Roma, where he bonded with the South American players over a shared love of music and also grew close to Mohamed Salah.

The pair remain on “very good” terms (though Rudiger revealed he voted for Eden Hazard as PFA Player of the Year), and the defender is hugely impressed with his former teammate’s emergence as a scoring sensation at Liverpool.

“He was already good at Roma, but there sometimes he [missed] some chances,” Rudiger said of Salah. “This year he is very, very clinical. Also, I think he is physically more strong than he was in Rome.”

Rudiger will likely have to contend directly with Salah when Liverpool take on Chelsea at Stamford Bridge on Sunday. The match will also bring him back into contact with Jurgen Klopp, who managed Borussia Dortmund during the three years he spent in the club’s academy before leaving for Stuttgart at 18.

“I spoke to him twice, because he used to watch a lot of academy games,” Rudiger said of Klopp. “He invited me to a friendly match. I was 16, or something like that. When he spoke to me, I saw he’s a coach that gives you motivation, like you’re the best in the world. That’s very good and one of his best skills as a coach.”

Anything less than a win will leave Chelsea needing a miracle to qualify for next season’s Champions League, but for Rudiger, the chance to win his first club trophy in the FA Cup final is also an enticing target. “If we don’t arrive in the top four, this is a little sweet that we can give to ourselves and the fans,” he added.

Rudiger’s success has occurred within the wider backdrop of a disappointing Chelsea season, and he admitted that maintaining a positive atmosphere has at times been difficult.

“You can make the dressing room like a funeral, and, of course, we are not happy with the bad results,” he said. “[But] at the end of the day, you still have to go on.”

He is confident, however, that missing out on Champions League football for the second time in three years wouldn’t have a catastrophic effect on morale.

“It shouldn’t, because first of all, we as a team know we did many things wrong,” he insisted. “I think it’s a new start.”

Whatever next season’s “new start” holds in store for Chelsea, Rudiger is poised to be a key figure.