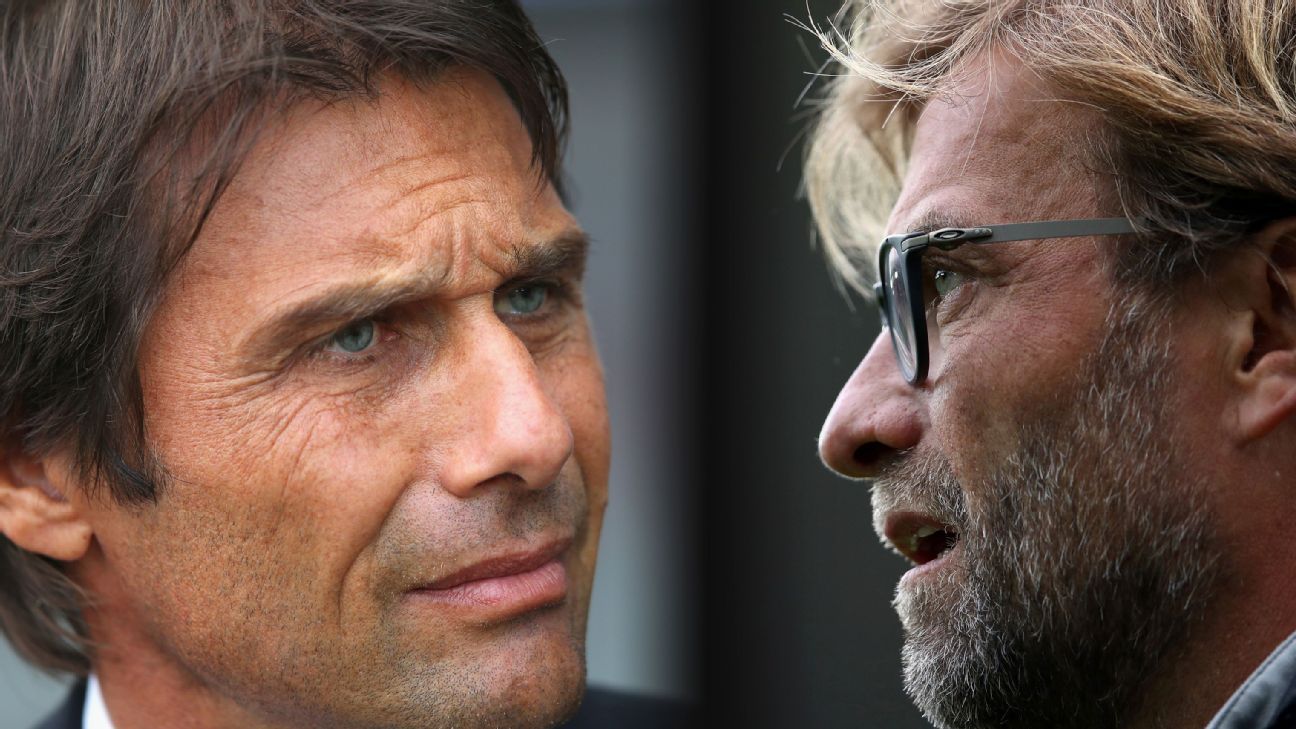 
There was a time when Liverpool and Chelsea were happy to see themselves as opposites. Rewind to a rivalry that developed rapidly and vitriolically when Rafa Benitez and Jose Mourinho took charge of the two clubs. Traditional force vs. nouveaux riches, northerners vs. southerners, Champions League winners vs. Premier League champions, the two liked to prove they were the antithesis of the other.

Now, in a way, they are opposites again; in the technical areas, anyway. Antonio Conte is the anti-Jurgen Klopp. Or maybe Klopp is the anti-Conte. Whichever, more divides than unites the men who will be yards apart, barking out orders on Sunday. The Italian may sport a designer suit. The German will almost certainly be in his club tracksuit. It is a sign of his informality.

His language is sprinkled with references to “Hendo”, “Milly” and “Bobby”. He deploys his players’ nicknames. His Chelsea counterpart often uses their surnames. Klopp exudes warmth. Conte can have a coldness.

Their attitudes seem apparent in their seasons and, perhaps, their tactics. Klopp represents incessant attacking, Conte a calculated defensiveness. Klopp’s positivity has transmitted itself to his players and, at times, the Liverpool crowd. Their Champions League run has owed much to a sense of optimism, an idea that with shared belief and effort presents boundless opportunity. Chelsea have seemed infected by Conte’s negativity, his bad moods reflected in their spate of red cards, his can’t-do mentality echoed in his side’s seeming belief from the season’s start that they could not retain their title.

They have set the tone. And yet if Klopp appears the maverick, he is actually more of the company man. He never criticises his club; indeed, he is often a quirkily effective front man, lending good public relations with his personality. In contrast, Conte’s complaints about Chelsea’s transfers have become a recurring theme. His discontent has been made public.

Conte is high maintenance, Klopp much less demanding. He demonstrates more understanding of his employers’ situation. He gives the impression he is working with them, Conte in spite of them. The summer transfer window closed without Liverpool signing a centre-back; Klopp voiced no dissent and eventually landed his preferred target, Virgil van Dijk, who had also been wanted by Chelsea. The comparison between a manager who got his preferred options — Van Dijk, Mohamed Salah and Alex Oxlade-Chamberlain, for whom Chelsea bid — and the one who ended up with a series of compromise choices seems one to irritate Conte as, aspirationally, he has cast covetous glances at his ideal additions. Liverpool have brought in quality, Chelsea have merely signed in larger quantities.

Yet it helps Klopp’s cause that, because he is more willing to work with the players at his disposal, he does not end up buying for buying’s sake. If it highlights the Liverpool manager’s greater faith in players — and perhaps, by extension, people — it is shown in differing approaches to squad players and youngsters alike. Conte has promoted Andreas Christensen but most of Chelsea’s other fringe figures have been discarded and their academy products loaned out. Klopp has a homegrown 19-year-old, Trent Alexander-Arnold, starting a Champions League semi-final. Conte never gave Dominic Solanke an appearance at Chelsea; Klopp has granted him 25 for Liverpool and, if he has been underwhelming, the forward nonetheless highlights the German’s belief in potential.

Conte looks for the finished article. Perhaps that is understandable. If he is a short-term manager and Klopp takes the long-term perspective, each is both a product of his environment and shaping it. The older man, Klopp, lasted seven years at both Mainz and Borussia Dortmund; he has a six-year contract at Anfield. He does not share Conte’s impatience. He had less of an immediate impact but is likely to last longer. If Klopp has often felt the great lost Arsenal manager, it would have been intriguing if he would ever have taken the Chelsea job; perhaps not, given his ethos seems so different from theirs and Roman Abramovich’s habit of sacking managers who do not win the league.

Which Conte did in his first season. One possible scenario this summer, if Real Madrid win the Champions League is that Chelsea win the FA Cup and sack Conte after two trophies in two seasons whereas Klopp cruises on at Liverpool with no silverware to show for three campaigns.

Yet both have been transformative. Conte changed Chelsea’s tactics, altering the angles and confounding opponents with his switch to 3-4-2-1 whereas Klopp reinvented Liverpool’s style of play, inverting the forward line, removing the specialist striker, making them narrower and faster.

The Italian’s switch was a short-term success, landing Chelsea the title last season. The German’s looks a more lasting approach; his imprint may be apparent at Anfield for longer than Conte’s is at Stamford Bridge. Perhaps his Liverpool have specialised in brilliant performances, often against the elite, whereas Conte’s Chelsea, at their best, were the more clinical winners. Liverpool took four points off Chelsea last season, winning the battle and losing the war, and there is the chance of a role reversal now. Yet even if that is the case, perhaps the simple conclusion is that Conte did the better job last season whereas Klopp is doing his to a higher standard now. But they have approached those jobs in wildly different ways.