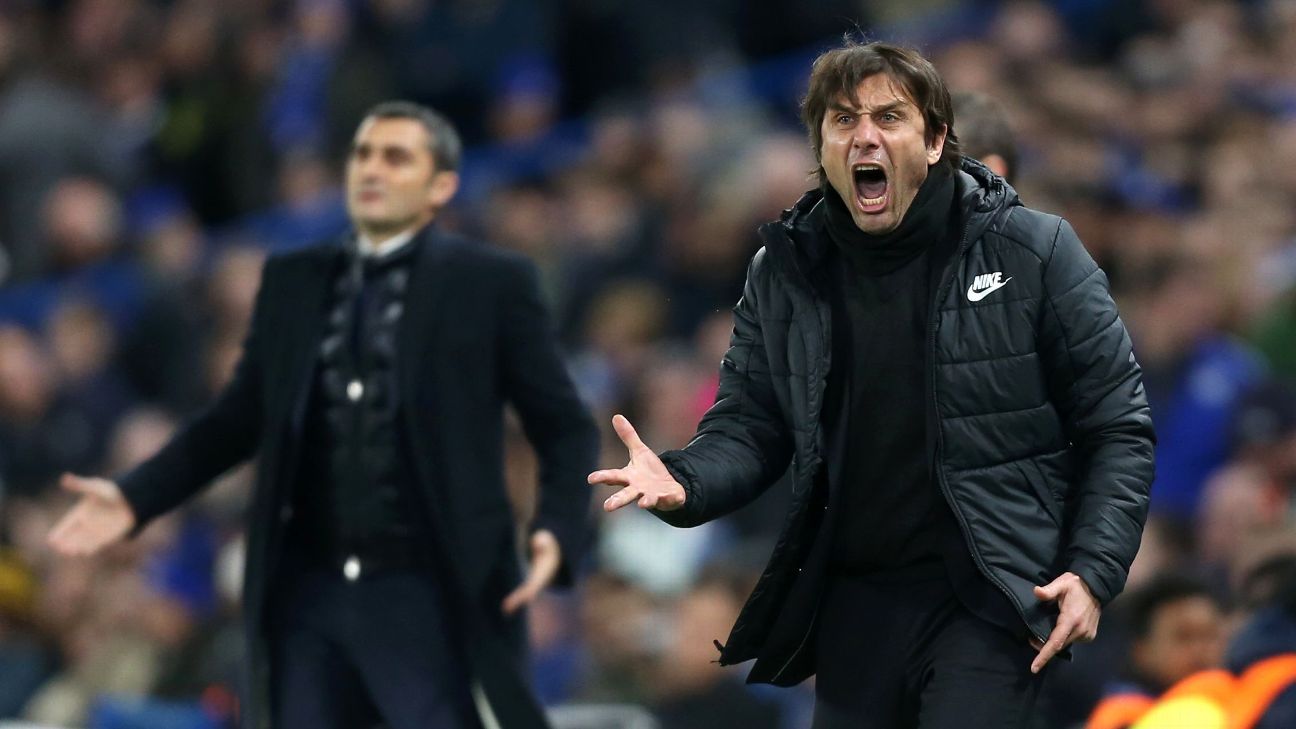 
Antonio Conte said last night that his team had been “close to perfect” against Barcelona at Stamford Bridge.

“We made one mistake and we paid dearly for it,” he added, referring to Andreas Christensen’s errant square pass across the penalty area that led to Lionel Messi’s equalizer.

That Barcelona equalized was merely the umpteenth reminder that in a low-scoring sport, mistakes in certain areas can be punished, but there’s rarely a single factor to it. Christensen bears the brunt of the responsibility, of course. He did what you’re generally taught never to do from a very young age: play the ball across the face of your goal. He played a near-flawless game: Stuff happens and it so happened that his screw-up came in the wrong place at the wrong time.

But break down the goal and there are other elements that could have gone differently. Cesc Fabregas might have reacted a little more quickly: Perhaps fatigue set in (stamina isn’t his strong suit and he had run himself into the ground by that point), perhaps he misread the situation and thought there’d be cover to clear the danger. Cesar Azpilicueta also came within a hair’s breadth of nudging the ball away before it got to Andres Iniesta. A slightly different angle on the tackle, or a slightly different roll along the surface of the Stamford Bridge pitch and the ball gets scooped away.

It works both ways. Iniesta decided in a split-second to gamble that Azpilicueta wouldn’t get to the ball first — or if he did, he wouldn’t clear it cleanly — so he angled his run not to challenge his countryman but rather to either collect the rebound or, as it happened, pick it up beyond him. And, of course, the Barca veteran had the technique, alertness and muscle memory after more than a decade together to know that Messi would have read the situation and trailed into the box.

Don’t forget Luis Suarez, either. The moment he realizes Iniesta has a chance at getting the ball, he cuts on a dime into space, ready to receive an assist that would never come but, just as important, commits Antonio Rudiger to follow him, meaning there’s nobody around to contest Messi’s finish. Then there’s the shot itself that, for a guy like Messi, was the most humdrum aspect of the whole affair. He made it look easy; for him, it probably was.

The point here is that Barcelona’s goal was the confluence of a number of factors of which Christensen’s pass may have been the most important, but still was one of many.

To Conte, this probably makes perfect sense. Chelsea were unlucky, victims of not just one unforced error but a series of events that went against him. And he was vindicated in playing the way he did.

That’s one way to look at it but if you accept that, you also have to accept the flip-side. That there was an element of chance and randomness to Willian’s goal and, indeed, the two other times he hit the woodwork. He struck them beautifully; he did well to get open for the first one and was clever in how he bent the ball around for the goal. But those are low-percentage shots. You don’t need to be an xG nerd to understand that.

It’s a safe bet that Conte’s game plan wasn’t based on Willian blasting away from distance but, more likely, something on the counter (akin to the chance in the second half when N’Golo Kante was free in the box) or off a set-piece. That was the part that didn’t quite come off. As effective as Chelsea were defensively — and Barcelona’s truck-load of possession was very much a case of sterile and unimaginative possession, in part because Conte thoroughly nullified them — the opportunities didn’t come at the other end.

Conte brushed off suggestions that maybe he should have started Olivier Giroud or Alvaro Morata after the match, saying he chose his personnel based on the opponent’s characteristics. On that front, he’s 100 percent correct. Morata hadn’t started a game in five-and-a-half weeks. Evidently, he wasn’t at his sharpest. Playing him (or Giroud) might have given you better hold-up play and another aerial threat but it would also have weakened the counter, the intermittent press in midfield and risked leaving an isolated lone figure up front stuck between Gerard Pique and Samuel Umtiti.

These are the tactical and personnel choices a manager has to make and it doesn’t just happen on reputation — it happens on scheme and form. Conte believed in Willian and the way his powerful running and long-range finishes could rattle Barca’s back four.

Conte made an equally big call in starting Fabregas. The Catalan has rarely been used in a midfield two when using the 3-4-3 against bigger teams. Why? Because he lacks the stamina and aptitude to be a holding midfielder like Kante next to him. But Conte chose him over Danny Drinkwater (a more natural fit) because he felt Fabregas would respond and do a job defensively while also offering a deep playmaking threat. He didn’t quite get to do too much of the latter part and that was down to Barca: He said after the match that “when your opponent has 70 percent the ball and then you finally get it, you are tired.” But he was humble and hardworking in the off-the-ball bit. And a big part of the reason why other than the goal — a tame Paulinho header and a Suarez effort from a tight angle — Barcelona created very little.

Conte got it right and he’s correct to be proud of his execution. But there’s an implication in this. “Getting it right” meant scrapping and playing like an underdog at home while relying on Willian’s ballistic prowess. And against a Barcelona team that hasn’t been playing particularly well for a while.

The approach speaks to how Conte views his squad and what they can do right now. Deny bigger opponents, go for the jiu jitsu counterpunch and take pops from distance. Maybe, buried in there, there’s a message for his employer.