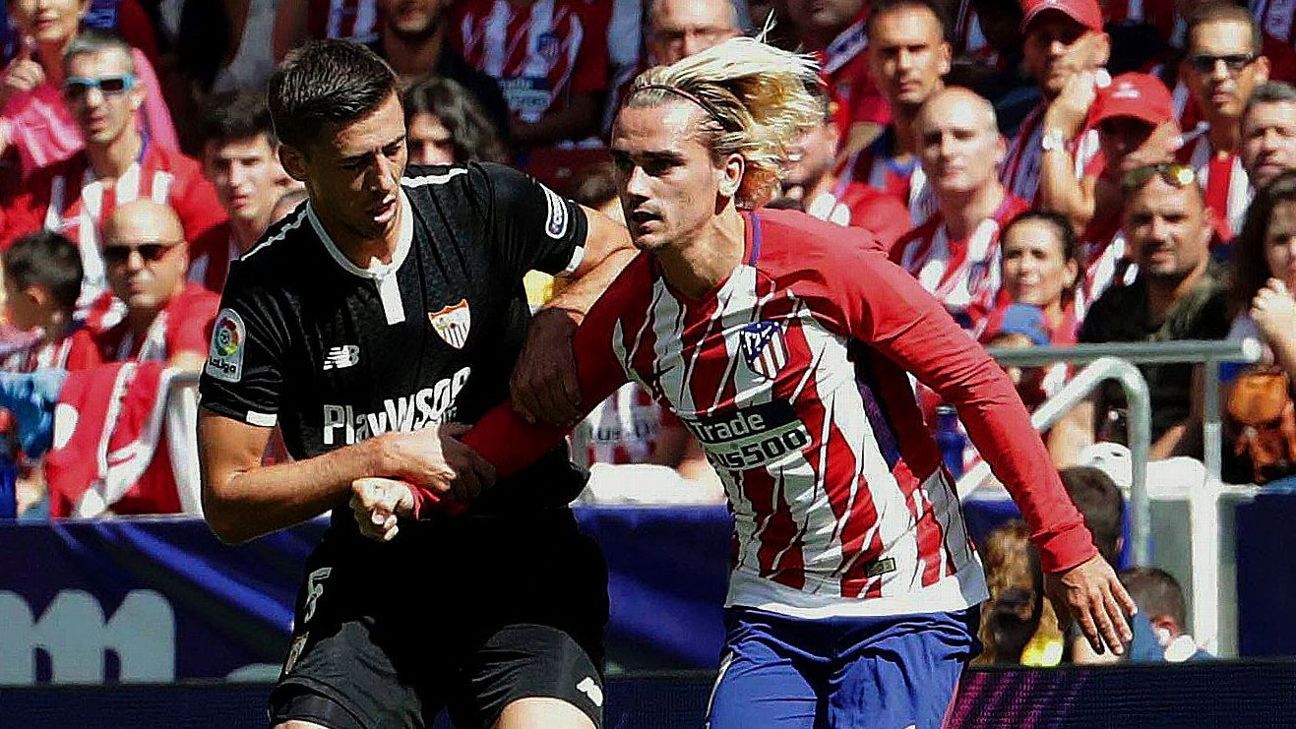 
Diego Costa’s return to Atletico Madrid from Chelsea means Rojiblanco coach Diego Simeone has the most fearsome attacking options of his time in charge of the club. But as so often at Atletico, financial issues mean they might not be able to ward off another approach from Manchester United for Antoine Griezmann.

While Atletico’s FIFA transfer ban means Costa and fellow summer signing Vitolo are not available to play until January, in the New Year coach Simeone’s attacking options will be extensive. Costa, Vitolo, Griezmann, Angel Correa, Yannick Carrasco, Luciano Vietto, Kevin Gameiro and Fernando Torres are all full internationals competing for at most three spaces in the first choice XI.

Such strength in depth in attack is great for Simeone, who has been rotating his forwards a lot through the first weeks of 2017-18. The numbers involved mean that, even with Costa and Vitolo not yet available, €30 million summer 2016 signing and France international Gameiro could not make the squad for Wednesday’s Champions League group clash with Chelsea.

Speaking ahead of that game, Atletico midfielder Saul Niguez said that having Costa’s return to the club he led to the 2013 Copa del Rey and 2014 La Liga title would ensure the team’s other forwards remained on their toes.

“Costa’s return will be good for everyone,” he said. “For sure the arrival of Costa will put all the forwards on alert, including Griezmann.”

Simeone has been rotating his squad through a busy fixture list so far, giving more or less equal playing time to forwards Griezmann, Correa and Vietto. Even though the numbers are affected by Griezmann’s two-game ban for his dismissal on La Liga’s opening day, it was striking to see the 2016 Ballon d’Or podium star being substituted in the second half of last Saturday’s 2-0 La Liga win over Sevilla.

“There was almost never a fixed first XI here,” left-back Filipe Luis said on Saturday. “It depends on the opponent and their characteristics. The important thing is everyone knows they have a chance to play; nobody is a certain starter. It is the team which wins. It is not easy, but everyone understands this.”

Amid all the celebration in Spain over Costa’s return, there have also been widespread reports that Atletico will have to sell two players in January, when Costa and Vitolo join their official payroll, to stay within La Liga’s budget controls.

Simeone would likely prefer to move either Gameiro, or another €30m arrival from 2016 in Nico Gaitan, after neither has fully settled into the Argentine’s setup. However their ages — 30 and 29, respectively — and recent performances would count against the club being able to recoup anything close to what was paid just over 12 months ago.

Meanwhile, coincidentally or not, sources have told ESPN FC that United remain interested in Griezmann, as their bid to sign him last summer was mainly nixed by Atletico’s FIFA transfer ban.

Boss Jose Mourinho has apparently “shelved rather than ended” his interest in signing the versatile 26-year-old. And even with the £75m arrival of Romelu Lukaku and the re-signing of Zlatan Ibrahimovic, Mourinho is not fully content with the attacking options he has available.

It would appear more likely that United would wait until summer 2018 before officially making any move, but results and circumstances between now and January might make a midseason switch more tempting to the Old Trafford side.

Another complication is that, as usual at Atletico, the club are walking a financial tightrope. Rojiblanco chief executive Miguel Angel Gil Marin has said that increased revenues from their new Wanda Metropolitano stadium will quickly pay for the move. However, reports in Spain this week maintain the club remain reliant on a rezoning of the land around their old Vicente Calderon ground to raise the funds needed to quickly pay off a €163m loan taken out to complete construction work at their new home.

Gil Marin cleverly kept Atletico moving forward off the pitch in recent years, and the club have reacted angrily in the past to suggestions they still need to sell their biggest stars to balance the books. Simeone’s extension of his contract until 2021 and long-term deals put in place for other sought-after players Koke and Niguez have also brought a certain stability.

In the end, it is likely to be Griezmann who decides his future. After all the to-and-fro last summer, it was clear he felt he could not let his friends and teammates down by leaving when Atletico were unable to sign a replacement.

If Costa hits the ground running from January, and especially if Griezmann’s playing time is restricted by the options available to Simeone, a move could easily be resurrected. Either way, it looks certain that speculation over a move to United is set to pick up again in the coming months.