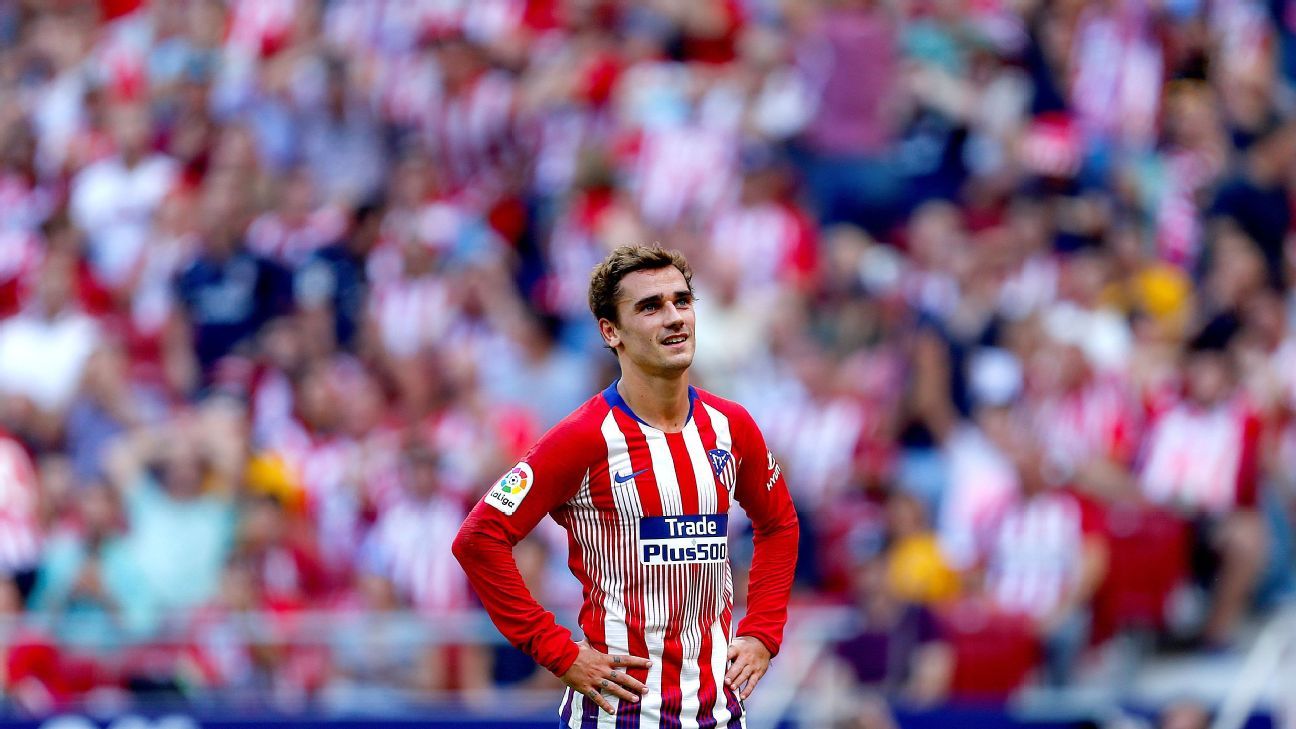 Atletico Madrid lurched towards a full-blown crisis as they scraped a 1-1 draw at home to Eibar on Saturday.

Profligacy was the name of the game as Los Rojiblancos came up against an inspired Marko Dmitrovic and allowed no fewer than eight presentable opportunities to go to waste, hitting the woodwork a couple of times, too.

It appeared they would be made to pay when Sergi Enrich gave the visitors a shock lead three minutes from the end, but substitute Borja Garces saved their blushes.

Big, big questions for Diego Simeone to answer ahead of the Champions League campaign starting, with Atleti’s La Liga tilt already appearing over, and we are only halfway through September.

Few and far between. Borja’s late goal. That’s about it.

For all Atletico’s huffing and puffing, Eibar struck the bar twice, took the lead and this team look all out of sorts. It really is not good, and after spending all that money in the summer it was left to an academy kid to bail them out.

4 — Yet again Simeone is left scratching his head. They were controlling the game with Rodrigo on the pitch, but lost it when he came off. Having said that, the man who replaced him got the equaliser, which gives him an extra point.

GK Jan Oblak, 6 — Must be wondering what is going on in front of him. This does not look like the same backline that has kept him so well protected over the past few years.

DF Juanfran, 5 — Did what was required of him in defence and looked to get forward but either the final ball was lacking or the forwards were not on his wavelength.

DF Jose Maria Gimenez, 6 — The best of a bad bunch at the back, but that is not saying much. Stood up well to the visitors’ aerial threat and was steadier than his partner.

DF Diego Godin, 4 — His form of late sums up the club. Looks like he has forgotten how to play football, and despite hitting the bar from a header, he was ultimately caught out when it came to Enrich’s goal. Lucky Lucas Hernandez is unavailable as he would surely be dropped.

DF Filipe Luis, 5 — Much like Juanfran on the right, his final ball was woeful. Needs to do better, but that can be said for the rest of the team.

MF Thomas Lemar, 4 — Is still finding his feet, but for €60 million you would have expected a bit more from him over the first few weeks in which he has largely flattered to deceive. Subbed.

MF Saul Niguez, 4 — A big disappointment after his standout displays with Spain over the past couple of weeks. Denied by a great save from corner, however apart from that was on the periphery. Is Simeone restricting him and asking too much defensively? Perhaps.

MF Rodrigo, 6 — Was his team’s best player and the crowd made their feelings known when he was surprisingly changed. Controlled the match in the middle of the park and should have had an assist when he fed Antoine Griezmann, who should have scored.

MF Koke, 5 — A mixed bag, but ultimately did not look like he benefitted from a fortnight off after his Spain snub. Worked hard in a defensive sense, and should have had an assist when he fed Diego Costa, who appeared to have caught the same disease as the rest of his teammates and missed.

FW Antoine Griezmann, 4 — Fluffed a one-on-one chance with the Wanda expecting the net to ripple in the first half, then repeated the trick after the break. Maybe he needs to concentrate a bit more on the football and not so much on his brand.

FW Diego Costa, 5 — Another denied by Dmitrovic’s heroics. Had two chances he should have buried, but wasted them. Not happening for him at the moment.

FW Angel Correa, 6 — Flattered to deceive in his half hour on the pitch, but showed his worth when he set up Borja’s last-gasp equaliser with his tenacity.

FW Borja Garces, N/R — Should have equalised less than a minute after Eibar took the lead but fluffed his lines. Made no mistake in injury time, though.