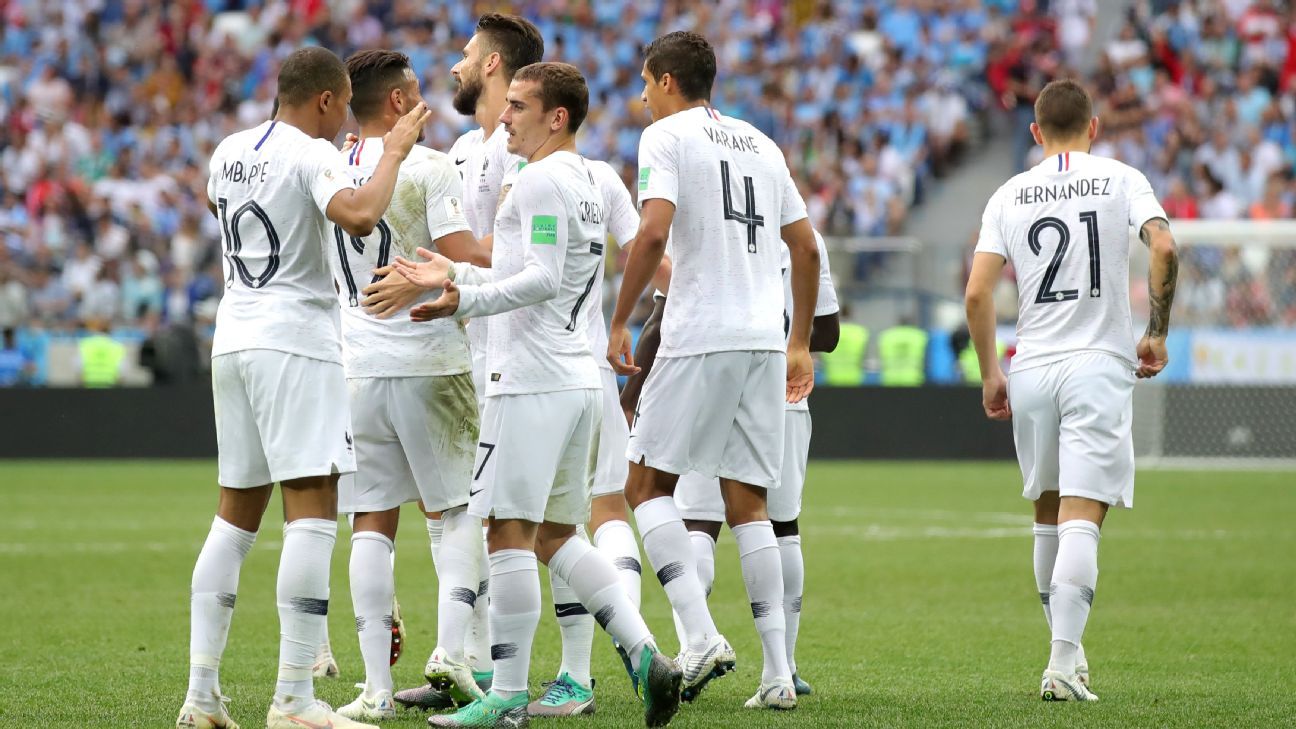 
France midfielder Antoine Griezmann said it was “normal not to celebrate” his goal that helped knock Uruguay out of the World Cup in Friday’s quarterfinal.

Griezmann did not smile, or perform his trademark dance from the Fortnite game, after Uruguay goalkeeper Fernando Muslera spilled a long-range shot into the net in the 61st minute.

The French star has many close ties to Uruguay, to the point where midfielder Nahitan Nandez called him “half-Uruguayan” in the lead-up to the game.

He was also playing against his Atletico Madrid teammates Diego Godin — the godfather to Griezmann’s daughter — and Jose Maria Gimenez, and said it was emotional to take the pitch against them.

“I did not want to celebrate on the pitch — I am very happy, but also sad for my [Atletico] teammates,” Griezmann told TF1. “It was my first time against Uruguay, so there was plenty of emotion.”

He added: “I was also playing against friends, so out of respect I thought it was normal to not celebrate my goal.”

However, Uruguay striker, who earlier this week rejected the “half-Uruguayan” term, wasn’t placated by Griezmann’s lack of celebration, saying: “he’s not Uruguayan, he’s French and he scored a goal.”

Griezmann was not too sympathetic towards Muslera over his error on France’s second goal.

“Was it hard for me to see the goalkeeper make a mistake? No, because it helped my team,” Griezmann said. “Whatever he meant to do, it worked out for France.

“Hugo [Lloris]’ save reminded me a bit of one he made against Germany. He is a great goalkeeper. He showed it once again — he has little to do but responds each time something is asked of him.”

Lloris, who made a dazzling first-half save to deny Martin Caceres, declared himself “proud to be French” on TF1.

“Great, once again — congratulations to everybody,” said the Tottenham shot-stopper. “We raised our level when we needed to, which shows the mentality of this team.

“The save was good, especially getting up fast to avoid the second chance. It was an important moment — I had to react.

“I am proud to be French, my teammates and I have realised something big — we are on our way.”

Raphael Varane, who scored the opening goal, was delighted to finally get service in the area that he wanted and is targeting ultimate World Cup success.

“This is pure joy – beautiful,” the Real Madrid man said to TF1. “I asked Antoine to put it where he did. It was a good moment to pick. I was asking for that all season, but it arrived at the right time, in a quarterfinal. Yes, we are looking to go all the way — that is what we came for.”

N’Golo Kante was busy in midfield again and revealed a happy dressing room atmosphere to TF1 after the result.

“It fills me with pride and is an honour to wear this shirt — we try to give everything,” said the Chelsea man. “The semi final will arrive soon, so we must recuperate.The dressing room is happy, because we enjoy these moments together.”

Kylian Mbappe was involved in a scuffle in the second half and picked up a booking, which Deschamps asked him about, and the Paris Saint-Germain is unafraid of coming up against teammate Neymar in a potential semi-final against Brazil.

“The coach asked me about the scuffle and I told him that I was calm, but that my opponent hit me,” Mbappe told TF1. “The coach always trusts me, and I try to reward his faith on the pitch — it is going pretty well.

“We already had strong links but winning is bringing us closer. Now comes the toughest part — the semifinal and the final.