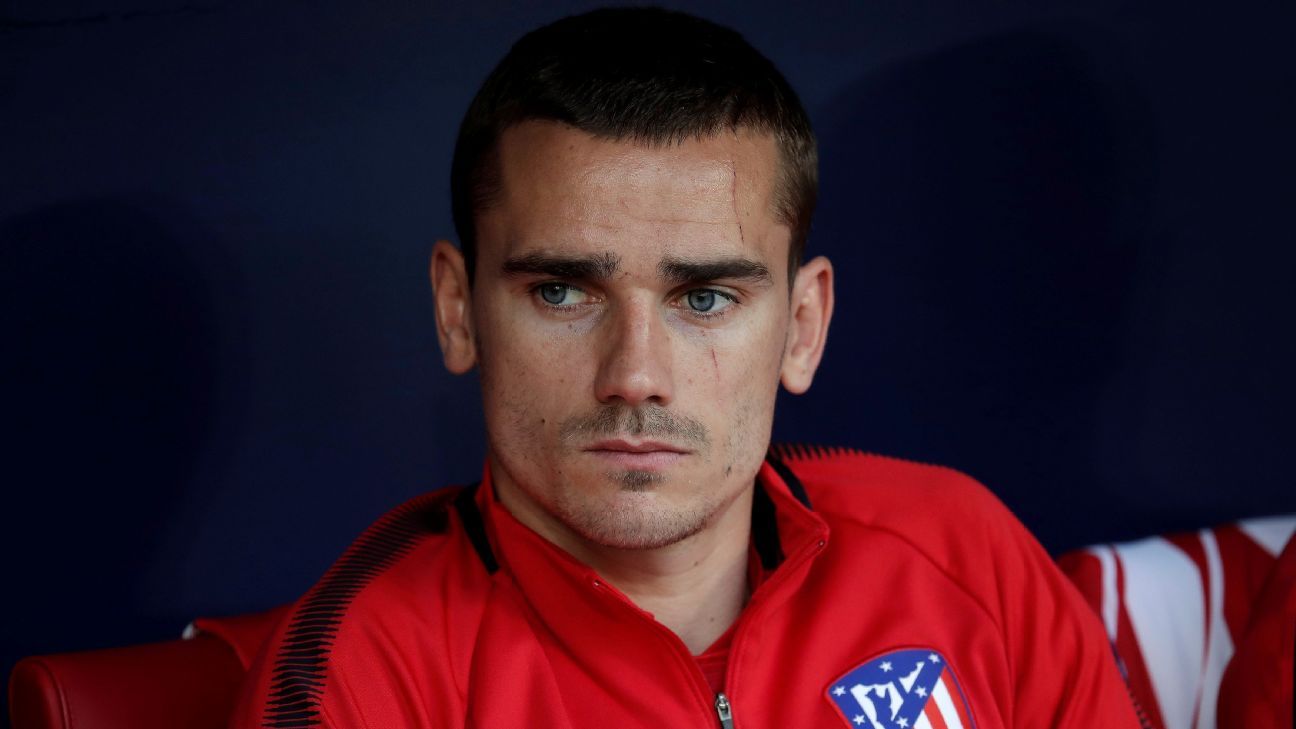 
“See the way racehorses run?” Diego Simeone asked. “I’m like that: head forward, I don’t see anything [else], I don’t hear anything. All I’m looking at is the final.”

Others, though, were looking elsewhere. Pretty much everyone, in fact, or so it felt. Wednesday afternoon at the Wanda Metropolitano saw Atletico Madrid hold their Media Open Day, an obligation imposed on them by UEFA as they prepare for the Europa League final against Olympique Marseille. It was a chance for TV, radio and print to prepare pieces for the final, build toward the big moment and ask Atletico all about the most important game of their season, the chance to win the fourth major European title in their 115-year history.

Well, that or Antoine Griezmann.

Simeone sat before the media and they asked about Griezmann. “The only thing I’m looking at is Getafe and then the final,” he said, but that didn’t stop them. There were four questions on Griezmann before they got onto anything else. After Simeone came Gabi, Diego Godin and Koke. Griezmann. Next came Filipe Luis and Diego Costa. Griezmann. And then Saul and Fernando Torres. Griezmann.

“We can’t control this,” said Gabi. At one point, Costa, asked yet again about Griezmann’s future, whether he had the feeling that the decision was made and he would not continue at the club, replied: “I’m fine. I’m staying.”

So, anyway, about this European final you’ve got…

It wasn’t entirely surprising, of course, and let’s be honest: we’re heading down the same route here. A few days before, Luis Suarez had talked about Griezmann in terms that suggested that it was not a case of if he would be going to the Camp Nou, but when. On Monday evening, Barcelona president Josep Maria Bartomeu admitted in an interview on RAC1 radio that he had not spoken to the Atletico president Enrique Cerezo but admitted that he had spoken to the player’s camp “in October.” The day before, Atletico had released a statement, via CEO Miguel-Ángel Gil Marin, saying they were “sick of Barcelona’s attitude.”

The statement accused Barcelona of “inadequate behaviour” and a “total lack of respect” in their pursuit of Griezmann, describing it as going against the spirit of the competition given that they were challenging Barcelona for the title for much of the season and questioning the timing of the latest remarks “a few days before the [Europa League] final.” It reiterated that the player is “not for sale” and that they have “no intention” of negotiating his departure. It even threatened to act against Barcelona. “Enough already,” it concluded. “Let us enjoy this moment and prepare for the final the way it’s supposed to be.”

Instead, preparations were marked by Griezmann; media preparations, anyway. Inside the dressing room and out on the pitch, it is another matter. Naturally, he didn’t talk at the Open Day, although he has done often. Over the last 18 months or more, he has complained that people kept asking about his future but then he kept talking about it too, and with surprising openness, sometimes barely even prompted, which didn’t always go down well with fans.

This time last year, Griezmann said that his chances of leaving were six out of 10. Manchester United were the destination then — the chances were suspiciously similar to their odds of winning the Europa league and thus qualifying for the Champions League — but United backed away a little, shifting their priorities in terms of a ideal striker type and asking for time that the players’ camp could not give them. When Atletico were hit by the transfer ban, Griezmann said that departing then would be “dirty,” leaving the club in trouble and with not chance of finding a replacement.

So he stayed, but he secured an exit strategy. His buy-out clause, currently €200 million, drops to €100m on July 1. When you agree to a €100m less for a player like Griezmann, you are effectively agreeing to sell him at that price; you know it’s a prelude to a probable departure. It is a lot of money, sure, but far from out of line with the market. In fact, this summer it may even be revealed to be a bargain. One thing’s for sure: it made him available and eminently buyable, however much his club say he’s not for sale.

Atletico knew that. Barcelona know that. And Griezmann knows that if they pay, he can move unilaterally, unimpeded. (He also knows, of course, that they intend to do so). Everyone knows that, in fact, and the buy-out clause system is one of the reasons why Barcelona believe that there will be no punishment for talking to a player who is still under contract and not in his final six months of his deal. The clause means that if the amount is paid, every player is effectively six months, or six minutes, away from being a free agent.

Atletico were unimpressed, though, and played on that publicly. Their next step may be to try to prove that since Barcelona talked to him before July 1, or even before January 1, six months prior to the clause getting changed, the real fee is €200m. Every club talks to players’ entourages directly and the degree of outrage tends to depend on who it is breaking the rules. Talks are inevitable when a price is effectively set, a sale facilitated 12 months in advance. There are, though, ways of managing that. And this is not really one of them even if it is unlikely to affect the final outcome. “We don’t like teams tapping up our players,” said Koke.

It probably didn’t help that Bartomeu hadn’t talked to Cerezo about it, at least to alert him of Barcelona’s intentions, to go through the charade of discussions. It certainly didn’t help that months ago, Guillermo Amor publicly admitted to conversations with Griezmann’s camp. And it didn’t help that on Monday, Bartomeu underlined that fact, lacking tact or tactics. Most clubs at least try to play the game, not openly admitting their pursuits or letting it all unfold in the public eye. This approach suits no one except, in terms of the fans’ response and the club, who can paint a portrait in which there was nothing they could do. The club that ultimately loses the player can occupy the moral high ground.

It had been coming for a long time, since last summer in fact, but ultimately the timing wasn’t great and that was reinforced by Atletico’s statement. That too contributed to the focus being drawn away from the Europa Leuague final. Perhaps in part because they knew there is not much they can do now to contribute to him staying. Cerezo, the Atlético president, had lunch with Griezmann this week. He said they talked about films. There may not be much else to talk about.

And so, on Wednesday they talked about Griezmann, more than they would have liked. They were asked to, after all. He was not there at the open day, but he was omnipresent. “If he goes, there’s no turning back,” said Costa, who left for Chelsea and came back. Sitting alongside him was Filipe Luis, who left for Chelsea and came back. There is a difference, Costa insisted: “I won something before I went.”

There was something in that, for sure. And that’s the thing now, or it should be. It should probably be the only thing, despite the desperation we all seem to feel to look beyond and be drawn more to transfers than the actual games, even the trophies. “He’s with us and he wants to win the final,” said Koke. “All we can do,” said Gabi, “is make sure he’s at ease with us and keeps on performing the way he is.” Back in March, Atletico’s captain had already said: “I am not going to ask him to be an Atletico fan; all I ask is that for as long as he is here, he defends the shirt the way it deserves.”

At times, the relationship between the fans and Griezmann has been strained not least because of his open courting of alternatives. After one game in which supporters whistled him, Griezmann did a “shhh” gesture. After another match that saw fans at the Metropolitano at his back in November, Simeone offered up a phrase that was a reprimand but also a defence, exposing him at the same time as he seemingly protected him. “I will defend to the death those who are in my family for as long as they are in my family,” he said, as he demanded commitment, attitude, work.

The line “for as long as they are in my family” was significant: Simeone knew then, just as they all did, that Griezmann would probably not be part of the Atletico family beyond the season’s close. But that defence was important: it may not be for much longer, but for now they were in this together. And, as Gabi demanded, Griezmann did defend the shirt the way it deserved, winning the fans over again with his football.

“I have made mistakes off the pitch but not on it,” said Griezmann in February. Superb this season, fifth-top scorer in La Liga, scorer of 27 goals in all competitions, he scored in London and provided the assist in Madrid against Arsenal, which was why they were sitting there on Wednesday and why they’ll be in Lyon next week.

“The truth is that at €100m, Griezmann is cheap,” said Filipe Luis. “And even more so if he has a great final.”