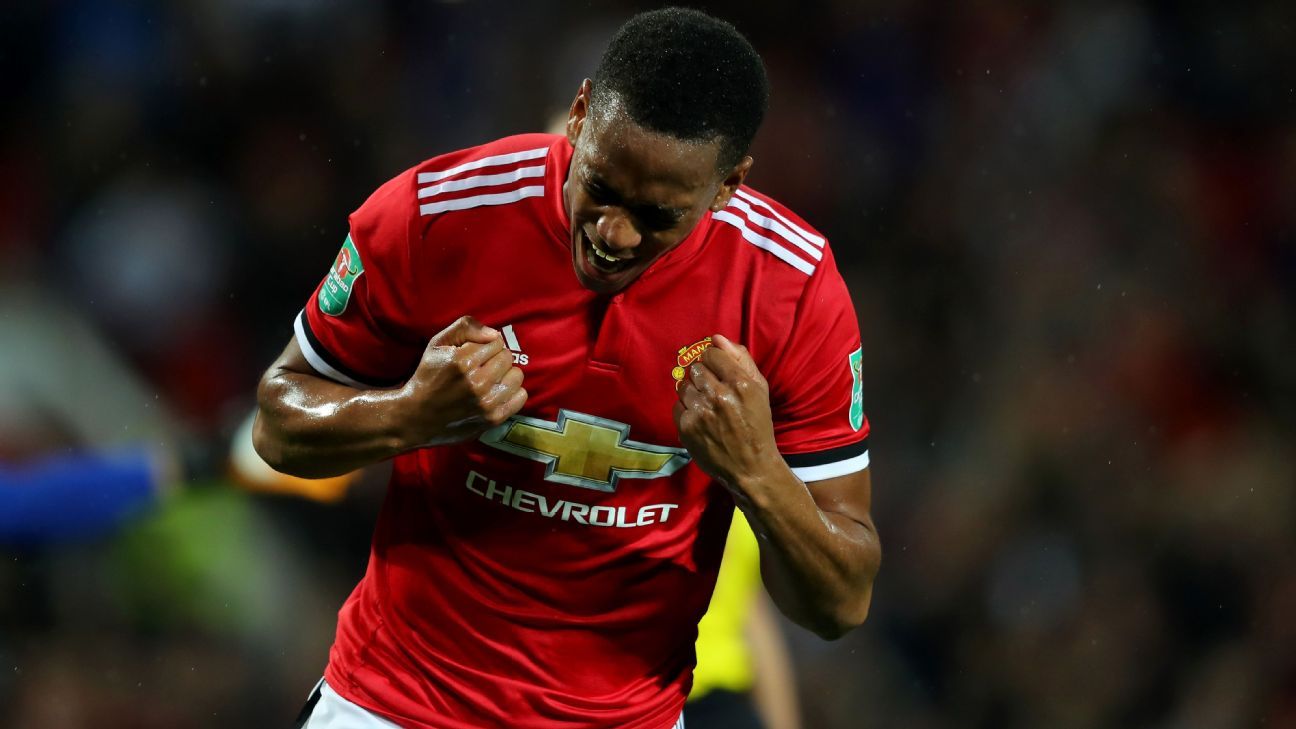 
When Jose Mourinho arrived at Manchester United in the summer of 2016 he found that Anthony Martial was not happy.

The Frenchman’s performances in his first season at Old Trafford — some watched by Mourinho on television during four months of unemployment after his exit from Chelsea — had given the impression of a young player who had settled in well.

He had not looked unhappy at Wembley in April as he celebrated a stoppage-time winner against Everton in the FA Cup semifinal. But behind the scenes Martial was dealing with a very public break-up with his partner and mother of his daughter, Samantha Jacquelinet.

A difficult European Championship with France followed. Subbed off at half-time against Albania, he did not start another game and when he returned to Unite, he discovered new signing Zlatan Ibrahimovic had been given his No. 9 shirt and he would be forced to wear No. 11, instead.

Such things did little to make him feel settled in Manchester, especially with his daughter and most of his friends and family back in France.

Mourinho and his staff were concerned Martial’s turbulent private life was effecting his performances. He started six of Mourinho’s first seven matches in charge of United. But of the next 22, he was in the starting XI for just seven.

Martial’s agent, Philippe Lamboley, went as far as to say he would consider a loan move to Sevilla in January. And the reports were not well received by Mourinho, who told Martial “to listen to me and not listen to his agent, he has to listen to me in training every day.”

Nearly 10 month on and the advice, it seems, is paying off.

“I see a great improvement in the person, his mood, body language, his happiness,” said Mourinho, after watching the 21-year-old produce a man-of-the-match performance against Burton Albion in the Carabao Cup.

This season, Martial is locked in a battle with Marcus Rashford for the first-choice slot on the left wing. It has restricted him to just four starts, but he has still managed five goals — only three fewer than he managed during the whole of the previous campaign.

Off the pitch, he is settled Manchester city centre with girlfriend Melanie Da Cruz. In the dressing room, he is being helped by the French-speaking contingent which includes Paul Pogba and Marouane Fellaini.

Mourinho, though, is still battling against Martial’s past. The United manager is of the opinion that the former Monaco man thrived under Louis van Gaal because he was given a free role — one that does not exist in the new-look United.

Mourinho’s wingers are expected to chase, press and help their full-backs. Martial is getting better, but Rashford still has the edge in that particular department.

It was a point Mourinho made after Martial scored one and made two in the 4-1 win over CSKA Moscow.

There is, however, a feeling at Old Trafford that those qualities are still underrated. Those who watch him train at Carrington every day will tell you he is better running at pace with the ball at his feet than Rashford. He is a better finisher, too.

Eden Hazard, who Mourinho knows well from their time together at Stamford Bridge, is considered one of the best players in the world, one of those occupying that imaginary level between everyone else and Lionel Messi and Cristiano Ronaldo.

Real Madrid were linked with a £100 million bid for Hazard in the summer. Martial, meanwhile, was rated at £25m by Tottenham, although talk of a bid was dismissed by United officials at the time.

Had Mourinho succeeded in his pursuit of Inter Milan winger Ivan Perisic this summer, Martial may have found his situation at United very different this season. Instead, he has taken his chance — something Mourinho had urged him to do last season. Finally, both manager and player seem happy.