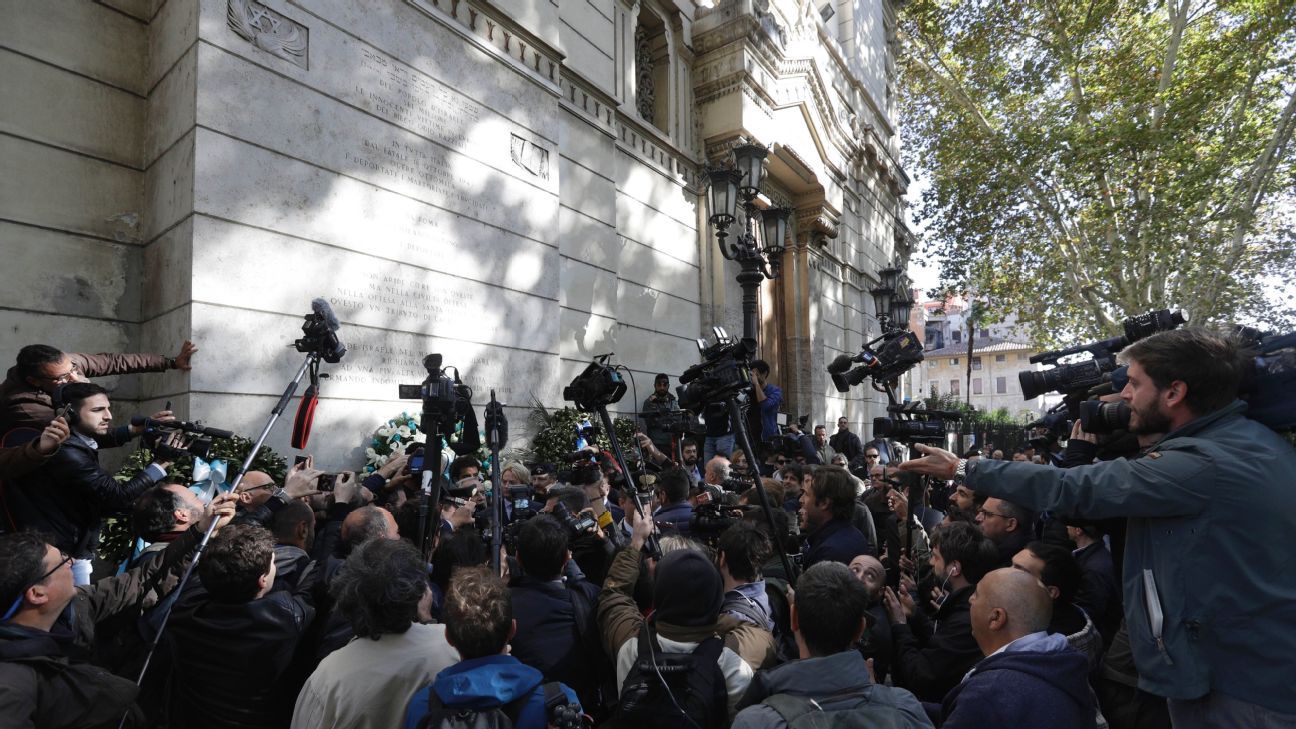 
Anne Frank’s diary will be read aloud at all matches in Italy this week, the Italian football federation announced on Tuesday after shocking displays of anti-Semitism by fans of Lazio.

Lazio supporters on Sunday littered the Stadio Olimpico in Rome with images of Anne Frank — the young diarist who died in the Holocaust — wearing a jersey of city rival Roma. A faction of Lazio ultras associate their Roma counterparts with being left-wing and Jewish, and had hoped to incite Roma fans, since the teams share the same stadium.

Stadium cleaners found the anti-Semitic stickers on Monday and Italian police have opened a criminal inquiry into the case.

The Anne Frank diary passage reading will be combined with a minute of silence observed before Serie A, B and C matches in Italy this week, plus amateur and youth games over the weekend, to promote Holocaust remembrance, the federation said.

The chosen Anne Frank diary passage reads: “I see the world being slowly transformed into a wilderness, I hear the approaching thunder that, one day, will destroy us too, I feel the suffering of millions. And yet, when I look up at the sky, I somehow feel that everything will change for the better, that this cruelty too shall end, that peace and tranquility will return once more.”

Racism has been widespread for years in many Italian and European stadiums — targeting both players and fans — and measures such as banning fans and forcing teams to play behind closed doors have not solved the problem.

Outrage over the stickers came from a wide variety of officials and rights groups across Europe, from both inside and outside the world of sports.

“Anne Frank doesn’t represent a people or an ethnic group. We are all Anne Frank when faced with the unthinkable,” Italian Foreign Minister Angelino Alfano said. “What has happened is inconceivable.”

Italian Premier Paolo Gentiloni called the stickers “unbelievable, unacceptable and not to be minimised.”

Antonio Tajani, the head of the European Parliament who is Italian, also denounced those responsible, saying in Brussels that anti-Semitism has no place in Europe, which must remain a place of religious tolerance.

“Using the image of Anne Frank as an insult against others is a very grave matter,” Tajani said.

The Italian football federation will also likely open an investigation, which could result in a complete stadium ban for Lazio, or force the team to play on neutral ground.

“There are no justifications. These incidents must be met with disapproval, without any ifs, ands or buts,” Sports Minister Luca Lotti said. “I’m sure that the responsible authorities will shed light on what happened and that those responsible will quickly be identified and punished.”

“There are other cases that we feel should lead the newscasts and fill newspaper pages,” the group said in a statement on Facebook.

Lazio president Claudio Lotito sought on Tuesday to disassociate the club from its ultras by visiting Rome’s main synagogue. He said the club would intensify its efforts to combat racism and anti-Semitism and organise an annual trip to the Auschwitz concentration camp with some 200 young Lazio fans to “educate them not to forget.”

“Stadiums cannot be places that are beyond the law and places where anti-Semitist, racist and homophobic people can find a place to show themselves,” Dureghello said. “We need to sit down around a table and talk to the institutions, the teams and the federation, to enforce actions and establish a common line for the future.”

The northern end of the stadium where Lazio’s ultras usually sit was already closed on Sunday for the match against Cagliari, because of racist chanting during a match against Sassuolo earlier this month. As a result, Lazio decided to open the southern end and let the ultras sit where Roma’s hardcore fans usually sit for their home matches.

Lazio fans have a long history of racism and anti-Semitism. The latest partial stadium ban for the team stemmed from derogatory chants directed at Sassuolo players Claud Adjapong and Alfred Duncan. Adjapong was born in Italy to Ghanaian parents and has represented Italy under-19s. Duncan is from Ghana.

Lazio will also be without fans in the northern end when Udinese visits on Nov. 5 — for racist chanting during the Rome derby in April.

Also this season, Lazio beat Belgian team Zulte Waregem in a Europa League match behind closed doors because of punishment from UEFA for racist chants aimed at a Sparta Prague player two seasons ago.

A Lazio banner nearly 20 years ago aimed at Roma supporters read: “Auschwitz Is Your Homeland; The Ovens Are Your Homes.” Another message honoured the slain Serbian paramilitary leader, Arkan, who was notorious for alleged war crimes in the 1990s Balkans wars.

But racism and anti-Semitism have also been seen at other European clubs, highlighting the ineffectiveness of campaigns by bodies all the way up to UEFA and FIFA.

Last season, Ghana’s Sulley Muntari was initially banned for protesting against racism in Italy. Muntari said he was treated like a “criminal” after being shown two yellow cards when he walked off the field during a Serie A game in response to racial abuse while with Pescara.