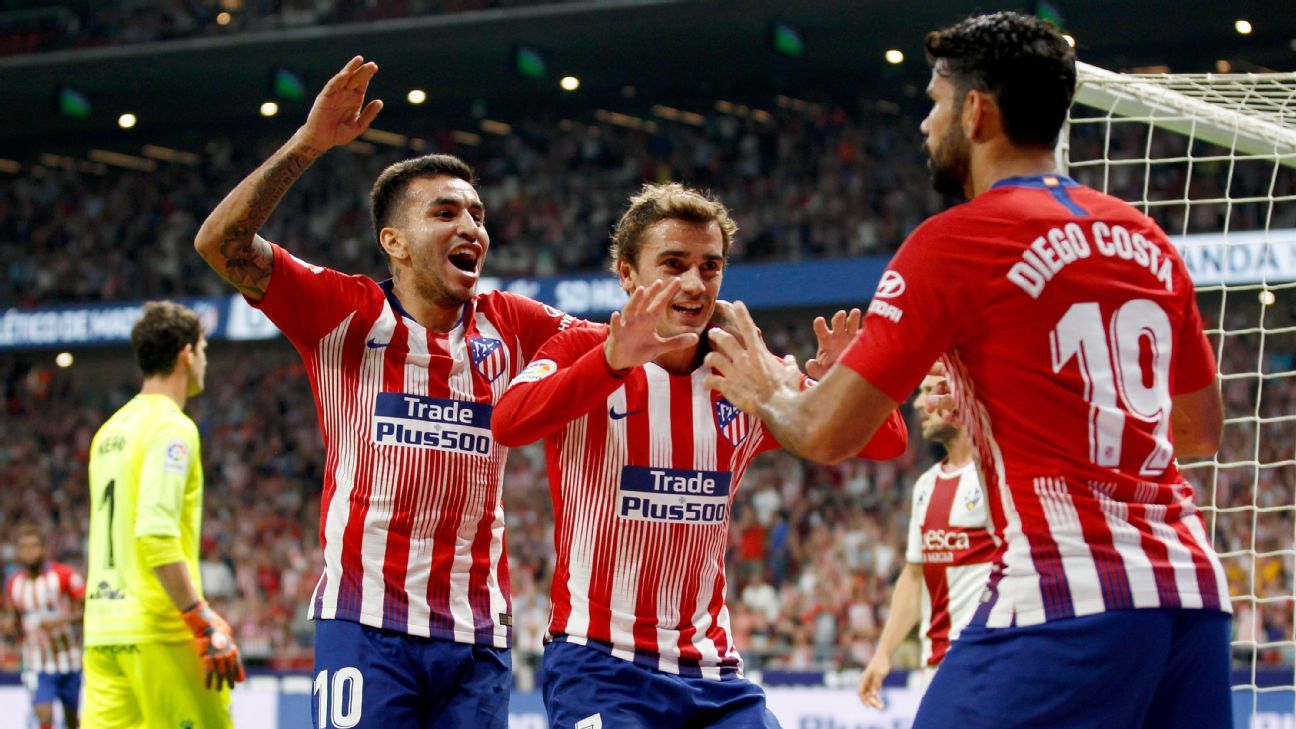 
Atletico Madrid continued their recent upturn in form as they swatted aside La Liga new boys Huesca 3-0 at the Wanda Metropolitano on Tuesday night.

It was as comfortable a night as they come for Los Rojiblancos, who dominated from start to finish and had the game wrapped up after 35 minutes thanks to goals from Antoine Griezmann, Thomas Partey and a fluke from Koke.

The second half was a non-event but Atleti’s form looks to be on the up just in time for this weekend’s mouth-watering Derbi Madrileno against Real at the Bernabeu.

A nice, easy win, another clean sheet and three points in the bag. The fact Griezmann and Diego Costa could be subbed early in the second half was a bonus.

Hopefully Jose Maria Gimenez’s substitution was just precautionary. The Uruguayan has been in fine fettle this term.

8 — Diego Simeone rotated heavily, however his faith was repaid by those who came into the side. Smart subs, too.

GK Jan Oblak, 6 — Could have had the proverbial pipe and slippers on. Will rarely have a more comfortable evening.

DF Carlos Munoz, 7 — Promising signs from the youngster, who completed his first 90 minutes for the club. Saw an early effort blocked from close range as he marauded forward and held his own defensively.

DF Jose Maria Gimenez, 6 — Had to come off with a calf injury in the first period. Hopefully just precautionary with the derby looming this weekend.

DF Diego Godin, 7 — More like it. Strode out from the back at every opportunity, such was the lack of Huesca pressure. Did what little defensive work that was asked of him with ease.

DF Filipe Luis, 7 — Was Los Colchoneros most dangerous player in the second half; which probably tells you all you need to know about the game. Is improving after a shaky start to the season.

MF Angel Correa, 8 — A menace throughout. Found space between the Huesca full-back and centre-backs and wreaked havoc at times. It was his neat ball round the corner that fed Costa, who in turn fed Griezmann, for the opener and his run that resulted in the third, too.

MF Koke, 7 — Not one of the prettiest goals he has ever scored but he will take it nonetheless! Built on an impressive display at the weekend here and looks more comfortable centrally than he does out wide, leaving the manager with a decision to make this weekend.

MF Thomas Partey 7 — Went close early on with his left foot, and Huesca did not heed the warning, Partey almost bursting the net with his right foot after half an hour. Another who has given Simeone food for thought ahead of the derby

MF Thomas Lemar 7 — Not quite at the level we saw at the weekend, but he was a thorn in the visitor’s side, linking well with countryman Griezmann. At times made the formation a 4-3-3, which looked dangerous and might well be the way forward against defensive sides willing to sit deep.

FW Antoine Griezmann, 7 — Was in the right place at the right time for his goal — as he so often his. Brought off just after the restart with the weekend in mind.

FW Diego Costa, 7 — His unselfish play set up the first when he could have elected to shoot. He has not scored in La Liga since February, though, and while he contributes so much more than just goals, one would be nice soon. Also got a bit of a rest ahead of Real Madrid.

DF Lucas (for Gimenez), 6 — Brought on in the first half with the game already won. Had little to do and what he did, he did well enough.

FW Nikola Kalinic (for Griezmann), 6 — Given a rare outing more to allow Griezmann to rest than anything. At 3-0 up — with the opposition having declared — is perhaps not the ideal environment for a target man.

FW Gelson Martins (for Costa), 6 — Threatened on the counter but needs to get his head up more.