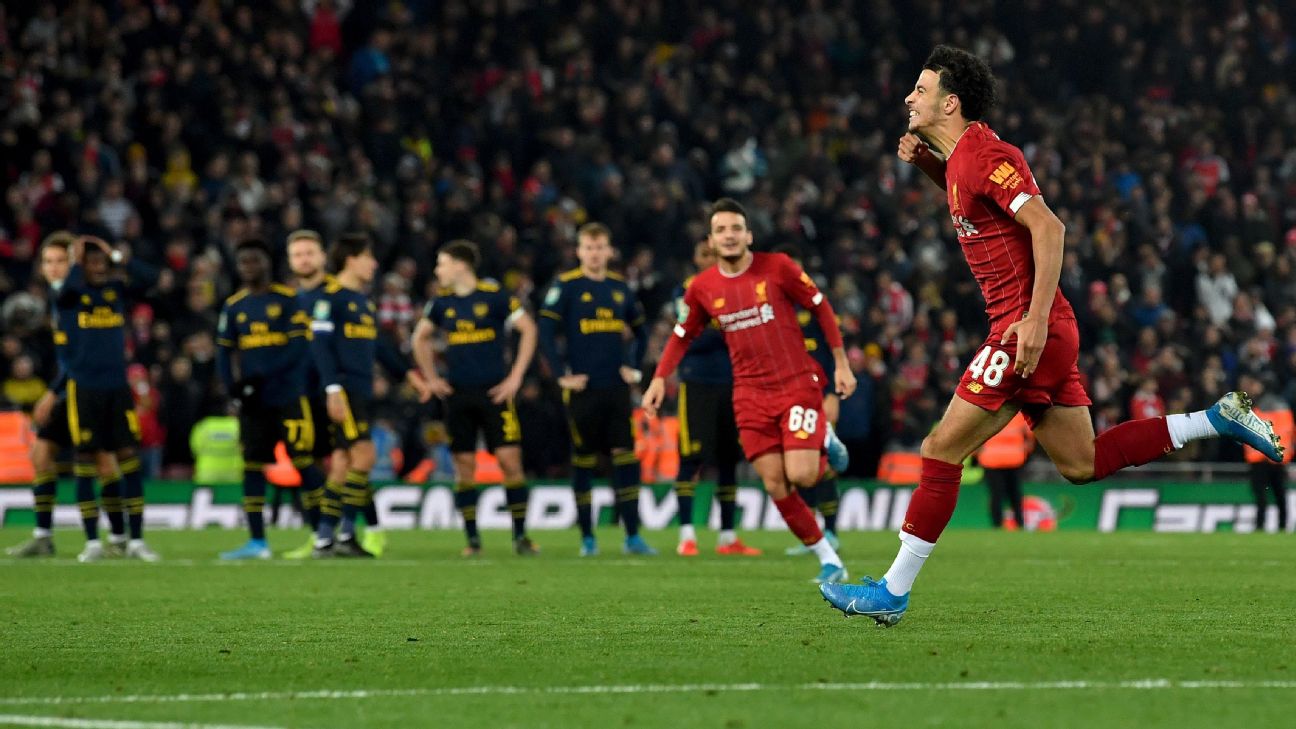 
LIVERPOOL, England — During Unai Emery’s first interview after arriving as Arsenal manager in May 2018, he condensed his philosophy into one memorable soundbite: “I prefer to win 5-4 than win 1-0.”

At a glacial Anfield on Wednesday, there was a 23-minute period against a Liverpool side, with an average age of 23 years, 122 days, in which that ideology was reflected on the scoreboard.

Joe Willock picked up the ball, drove forward and whipped a venomous, right-footed strike into the top-left corner to make it five goals to Arsenal and four to the hosts.

Then the major flaw in that methodology was underlined when Liverpool debutant Neco Williams lofted a cross in to Divock Origi with the clock reading 94 minutes.

The Belgian pulled away from his marker to volley on the turn and into the corner to send the game to penalties.

Gunners midfielder Dani Ceballos saw his spot kick saved by 20-year-old goalkeeper Caoimhin Kelleher, and in a matter of minutes, Arsenal went from winning 5-4 in regular time to losing 5-4 in the shootout.

The result, even given the crazy, barely believable nature of the game, will not have done an already unpopular Emery many favours.

With an already packed schedule to contend with, the Carabao Cup is nowhere near the top of Liverpool’s priorities, which was reflected by their squad that was more akin to an Academy team sheet.

The XI contained five players aged 20 and under — including 16-year-old Harvey Elliott — with goalkeeper Adrian the only senior player on a substitute bench of kids.

Arsenal had the stronger, more experienced matchday 18 on paper and more riding on reaching the quarterfinals of the competition.

The north Londoners had worked a 4-2 advantage by 54 minutes, courtesy of some fine work by the forgotten Mesut Ozil, and they should have squeezed any resistance out of Liverpool’s shadow side.

Instead, they showed zero grip of game management nor signs of being streetwise, encouraging the likes of Rhian Brewster, Elliott and Origi to keep huffing and puffing to blow their fragile defence down.

They obliged. It took just four minutes for former Arsenal midfielder-turned-Kop-idol Alex Oxlade-Chamberlain to unsettle Arsenal with a 25-yard beauty.

After another four minutes, Origi’s glorious turn and finish had matters level at 4-4.

When Willock buried his breathtaking hit in the 70th minute, Arsenal still showed no inclination to suck the spectacle out of the game and make the result safe.

The match, despite its nonsensical nature, rubber-stamped what we already know about Liverpool and Arsenal at present.

“We always keep on going. That’s our mentality,” Origi said of his side, who keep finding ways to win — even if their schedule would’ve benefitted from exiting the Carabao Cup.

Arsenal, conversely, wilt: They have conceded nine goals in their past three matches in all competitions.

And so it was more than just a missed penalty that separated these teams in the chaos at Anfield.

“I was absolutely convinced we could give them a proper game, so that’s why we decided for that lineup,” Klopp said in a salute to how good he thinks his young players are, but it also seemed like analysis of how soft Arsenal can be.

“I enjoyed pretty much each second of the game, to be honest. I don’t know when I last had so much fun in a football game.

“I saw so many really good performances. I was so happy and pleased for the kid. Obviously, they will remember their first night at Anfield for the rest of their lives, and in the end they made it a proper, special football night.”

Emery echoed Klopp’s sentiments about entertainment that was “amazing for the supporters,” adding, “We were very close to the win and they equalised late, and penalties are 50/50. We are disappointed in the end, defensively, because we conceded five goals, but there were a lot of positives for us to use for the future.”

One of those was Arsenal’s impressive 18-year-old forward, Gabriel Martinelli, who scored twice on the night.

The Gunners are stocked with players with very high ceilings — Matteo Guendouzi and Willock are two more examples — but there are questions around whether Emery is the right man to both advance their development and meet the ambitions of the club.

Nights such as this don’t help point to an answer in the affirmative.