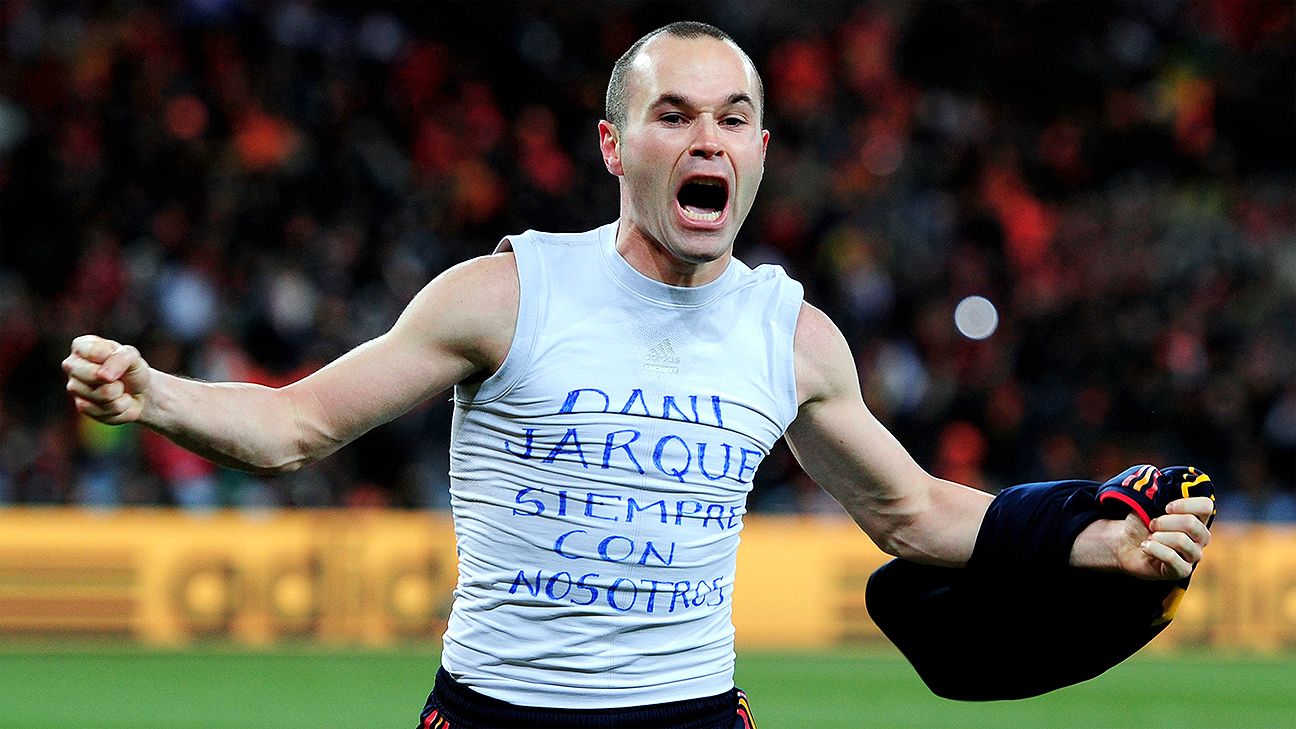 
A tear began to run down Xavi Hernandez’s cheek. A Barcelona without Andres Iniesta? He didn’t even want to think about it. But he has to. There was a time when you thought of Barca and you thought of Xavi and Iniesta. Xaviesta. But Xavi left the office three years ago and now, after 22 years at Camp Nou, it’s time for his old desk-mate to say goodbye as well.

And as he did say goodbye, at a glitzy farewell event organised by the club on Friday, Xavi began to cry. The former Barca midfielder’s tears would have resonated with football supporters across Spain, regardless of their colours. Few — perhaps even no one — have transcended club rivalries like Iniesta.

For starters, he’s a Barca player who has been given an ovation at Real Madrid’s Bernabeu. In fact, it would be shorter to list the stadiums where he hasn’t been applauded. In the last few weeks alone, Sevilla, Deportivo La Coruna and Levante supporters have all shown their appreciation in different circumstances. Iniesta leaves a Barca icon but also a Spanish icon and many believe the greatest player to ever represent his country.

“For me, Iniesta is the best player in the history of Spanish football,” said Real Sociedad’s Xabi Prieto this week, echoing the view of the majority. “He makes everything that is difficult to do look so easy, so effortless and it’s a shame that he’s leaving our league. We’ll really miss him.”

Spain’s greatest player has to be someone from the last decade, someone who was part of the three consecutive titles they won: two European Championships (2008, 2012) and the World Cup (2010). As La Roja’s record scorer, David Villa is under consideration. With more caps than any other player, Iker Casillas may even be up there as well. But it was the midfield which marked Spain’s success, with Xavi and Iniesta front and centre.

Iniesta wins the popular vote, though. Perhaps because he has the standout moments: the winning goal in the World Cup final, Euro 2012’s Player of the Tournament, the player photographed swarmed by six Croatian players trying to get the ball off him, recreating the memorable image of Diego Maradona at the 1986 World Cup.

If he wasn’t sharing a pitch with Messi at Barcelona, Iniesta may even have won a Ballon d’Or at some point in his career. Samuel Eto’o says Iniesta should have won three. France Football, who present the prestigious individual award, apologised for the fact he has never won even one, but he has the recognition of his peers anyway.

“I know how difficult it is to do what he does,” Messi says in Iniesta’s book, The Artist. “On the pitch, I like him to be near me, especially when the game takes a turn for the worse, when things are difficult. That’s when I say to him: ‘Come closer.’ He takes control and responsibility.”

There have been few finer sights in the last decade than watching him keep the ball and glide past players, as Prieto says, effortlessly. That two-foot shuffle, that change of pace, that swivel.

Luis Enrique has been one of the best when it comes to finding ways to describe him: “World heritage,” “Harry Potter” and “the caviar of football” among his efforts.

Pep Guardiola, meanwhile, tried to put his finger on why there wasn’t more acclaim for such a magical player: “Iniesta doesn’t dye his hair, he doesn’t wear earrings and he hasn’t got any tattoos. Maybe that makes him unattractive to the media, but he is the best.”

It’s certainly not stopped Iniesta being appreciated in Spain. Aside from what he’s done on the pitch, perhaps the reason why he’s so widely appreciated, placed ahead of Xavi, Casillas and Villa, is his humility. Not that the others don’t have it, but Iniesta really has it.

A Barcelona player from the south of the country, he’s managed to tread the fine line between Catalonia and Spain. Which hasn’t been easy in recent years. He even, somewhat surprisingly given his quiet character, called for dialogue between Catalan and Spanish leaders in the uncertain aftermath of October’s referendum on Catalan independence.

After his winning goal in the World Cup final, it wasn’t all about him. There was no ego. Instead, he peeled off his shirt to reveal a T-shirt dedicated to close friend Dani Jarque, the Espanyol player who had passed away in 2009. Espanyol supporters, Barcelona’s city rivals, have never forgotten. They unveiled a banner at their home game immediately after he revealed he was leaving Barca: “Thanks, Iniesta, above all for being a friend.”

Then there’s the fact he’s managed to almost steer clear of the Barca-Madrid rivalry, keeping his head down even in the heated Guardiola-Jose Mourinho years and resisting the temptation to criticise, moan or condemn.

Barca coach Ernesto Valverde says you only really realise the true significance of Iniesta once you’re working inside the club, but a pretty good picture has been painted over the last month.

Marc Marquez, Rafael Nadal and Pau Gasol were among the sports stars to pay tribute to his Barcelona career in a video broadcast at the farewell event held at a lit-up Camp Nou on Friday in front of a stellar audience. The list of footballers, past and present, to feature in the video, meanwhile, was endless: Kevin De Bruyne, Yaya Toure, Andrea Pirlo, Fabio Capello, Louis Van Gaal, Gary Lineker, Paolo Maldini, Samuel Eto’o, Ronaldinho, Thierry Henry. It goes on and on…

The extent of the affection, tributes and homages have been incredible. And revealing.

A mosaic will be revealed before Sunday’s game against Real Sociedad, one final thank you for over 650 appearances and 32 trophies, carrying the phrase “Infinite Iniesta”. The definition of infinite? Limitless or endless in space, extent, or size; impossible to measure or calculate.

Xavi’s tears came upon the realisation that Iniesta’s infinity won’t prevent him leaving the club. After the La Real match, he will never be seen in a Barcelona shirt again. He leaves with a Double which he wishes was a Treble, one final Champions League missing, and turns his attention to this summer’s World Cup, where he will have the chance to dispel any lingering doubts about whether he is Spain’s greatest ever player or not.