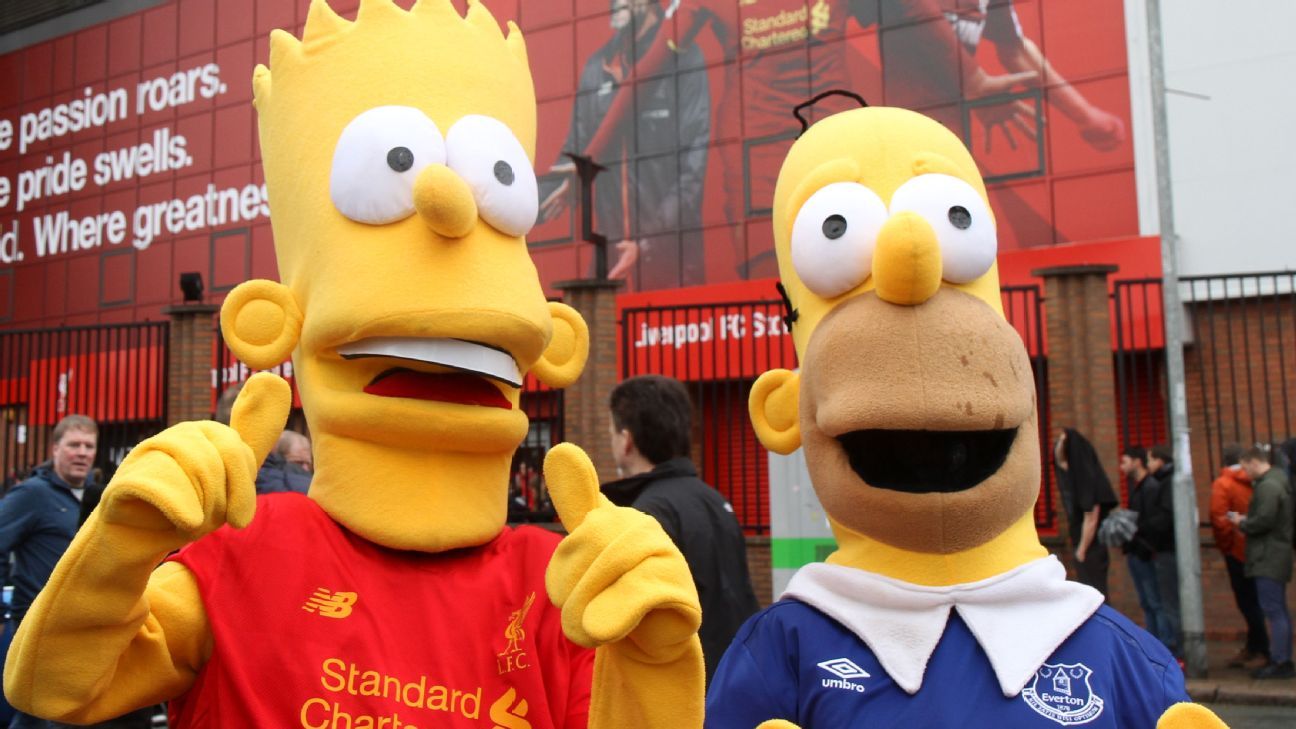 
The sheer paranoia, fuss and aggressive energy that goes into them is quite something. And that’s just in the days leading up to a domestic derby. In the space of a few hours Sunday, Merseyside and Manchester will host their own hyperlocal square-ups at Anfield and Old Trafford, feeding the obsession with a fixture that offers as many points as any other.

But what makes a classically great derby game?

These double-derby days are a convenient quirk of the mythical “fixture computer.” They’re an extended opportunity for a “good advert” for the Premier League, which usually consists of such English footballing staples as end-to-end football, full-blooded tackling and the disproportionate excitement at winning a corner.

The historical foundation that has made these fixtures what they are has inevitably been commandeered to boost the worldwide TV audience. Emphasizing the proximity of the two clubs in a local rivalry — often explicitly demonstrated with an aerial shot across Stanley Park, for example — taps in to the in-built authenticity of a derby. There’s nothing manufactured here no matter how much money has gone into either squad, and that’s as appealing in Manchester as it is in Mumbai.

One of football’s most enduring currencies that flows back-and-forth within and between cities for decades, “bragging rights” is a phrase you read a lot and hear a bit but should never say out loud yourself. It probably used to be quite a charming post-derby phenomenon, on a par with a bit of gentle ribbing in the office on a Monday morning.

Modern bragging rights, though — which must first be applied for through the European Court of Bragging Rights, presumably — are a whole different beast. For better or worse, Twitter has distilled the art of schadenfreude down to its basest form: derby defeat was surely never as excruciating before Photoshop or GIFs were invented.

Of course, there’s still room for some instinctive and creative ways to project one’s superiority complex. In 2012, for example, Luis Suarez responded to some thinly veiled comments from David Moyes about his occasional acts of gamesmanship by scoring for Liverpool at Goodison Park and then gleefully throwing himself to the floor in front of the home bench. Football pantomime at its petty finest.

Perhaps something of a dying art since Jose Mourinho swapped mischief for misanthropy in his news conferences, although United perhaps struck the first small psychological blow by refusing City permission to film inside the tunnel and dressing room for their upcoming £10 million Amazon documentary series. It is upon the foundation of these cheap shots that all good derby games are built.

Mourinho spent much of the lead-up to the first Manchester derby of the season by casting doubt on Pep Guardiola’s injury list. This is a constant fuel source for mind games: the suspicion that the opposing manager has declared a key player to be unfit.

“Nemanja Matic is injured but will play for sure,” said Mourinho this week, presumably lulling the City midfield into a false sense of security. “I’m telling the truth! It’s the truth. No stories of [Alexandre] Lacazette or David Silva. All the truth. Our opponents have all these issues. They have a big issue, but in the end, everybody is ready to play.”

Guardiola, meanwhile, prefers to rise above this sort of nonsense … until the final whistle blows. If Mourinho is the expert in laying down the prematch gauntlet, Guardiola remains the greatest postmatch spectacle in the business: all passive-aggressive grins and wild, listen-to-me eyes. Somewhere in the middle of all that, 22 players might be allowed to have a go.

Such are the demands for passion and commitment in a derby, it’s perhaps one of the least enviable refereeing appointments on the football calendar. Tranmere Rovers fan and noted limelight-avoider Mike Dean should be the ideal candidate for a Merseyside melee, but he has presided over the derby just once in a the last decade.

So do you set the tone early, or do you keep your cards in your pocket and the game flowing? That’s the derby-day dilemma facing Craig Pawson at Anfield (who looks more like an assistant manager at a leisure centre) and Michael Oliver (who has more of a community police officer vibe about him) at Old Trafford. After all, prederby hype can snowball into some spectacular fouling, as recent history can attest.

The goal-less Merseyside derby of Christmas 2002 was given some festive cheer by a Steven Gerrard tackle on Gary Naysmith that, in the words of the Telegraph’s Henry Winter at the time, “was so late he almost finished it on Boxing Day.” Pawson will at least be double-checking where he’s put his red card: no Premier League fixture can match the 21 sendings-off in 51 Liverpool-Everton meetings to date.

As for Manchester’s on-pitch relations, it all boils down to one “tackle” and the most notable incident since City’s Denis Law back-heeled his old club United toward the the second tier in 1974. Roy Keane’s knee-high revenge mission on Alf-Inge Haaland in 2001 was summed up quite tidily in his own autobiography.

“I’d waited long enough. I f—ing hit him hard. The ball was there, I think. Take that you f—. And don’t ever stand over me again sneering about fake injuries. I didn’t wait for Mr. [David] Elleray to show the red card. I turned and walked to the dressing room.”

With that in mind, the lack of an old-fashioned midfield enforcer on either side at Old Trafford this weekend might come as something of a relief for the match officials.

The form book goes out the window

Part of the self-mythology of domestic derbies is that they become self-contained battles, ring-fenced from the outside influence of league tables and treatment tables. Won 13 league games in a row? Looking to equal an all-time record for consecutive league victories? The derby hype machine says that your noisiest neighbours aren’t the place to do it.

In reality, of course, derbies are far from immune to the hard truths. Everton might consider themselves a stern test for Liverpool, but they haven’t beaten them in the past 14 Premier League Merseyside derbies — and, indeed, only twice in the last 24.

It would take some serious defenestration of the proverbial form book for that run to be halted.