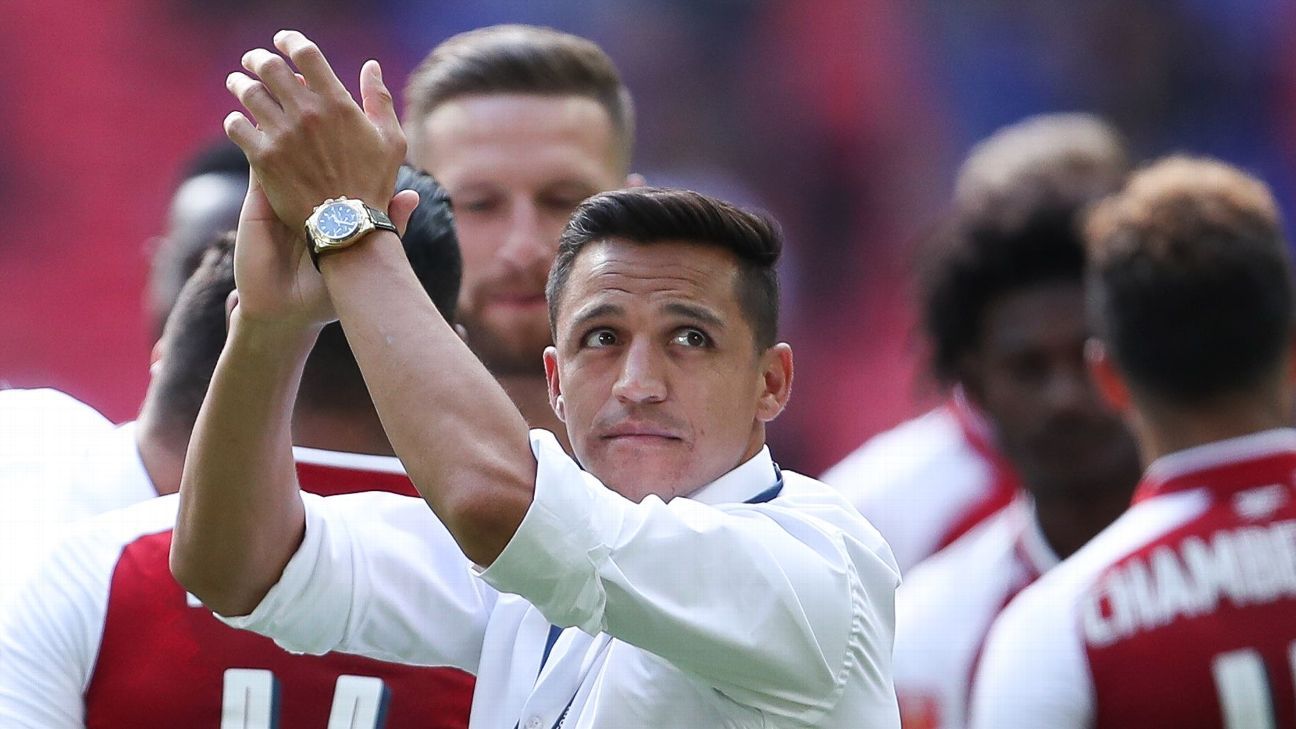 
LONDON — Arsene Wenger has ruled Alexis Sanchez out of Arsenal’s Premier League opener with Leicester on Friday due to an abdominal strain.

The Arsenal boss said that the Chile international is likely to be “out for a while” and is also doubtful for the following week’s game at Stoke.

However, Wenger insisted that Sanchez remains “focused” on playing for Arsenal this season amid continued speculation about his future, with Paris Saint-Germain reportedly lining up an £80 million offer.

Wenger says Sanchez suffered the strain in training on Sunday before the Community Shield against Chelsea and underwent a scan on Monday.

“He’s out for a while. I don’t know if it’s two weeks, or one more week,” Wenger told a news conference on Wednesday. “But he will not be available [against Leicester]. I think he will not play at Stoke.”

Wenger also said there are “plenty of uncertainties” around players like Mesut Ozil, Aaron Ramsey and Per Mertesacker for the Leicester clash — Ozil and Ramsey missed the Community Shield victory, while Mertesacker was taken off injured after sustaining a head injury.

The Arsenal boss has also not yet decided whether to throw Shkodran Mustafi into the starting line-up after he missed most of preseason because of the Confederations Cup, meaning his team to face Leicester will likely be similar to the one that beat Chelsea on penalties on Sunday.

“I cannot go into the game with too many uncertainties. I can take a gamble on one, maybe maximum two,” Wenger said. “I will focus more on the players who had the right number of competitive minutes in recent weeks.”

Arsenal are set to enter the season with a weakened team for the second year in a row.

Ozil, Koscielny and Olivier Giroud all missed the start of the campaign last year after Euro 2016 as Arsenal took just one point from their opening two games.

Sanchez also returned late from his summer break, and Wenger said he would not have started him against Leicester even if he had been fit, though he acknowledged that the forward will be missed.

“Alexis Sanchez is always a loss for us, of course. But all the other players prepared in preseason and are ready,” Wenger said.

Wenger also said that there has been no contact with PSG over Sanchez, and would not rule out him signing a new contract at the club.

Sanchez and Ozil are both entering the final year of their current deals and could leave for free next summer.

“All is possible you know,” he said. “When a player goes into the final year of their contract we will try to extend the contract because there is no reason we shouldn’t do it, but we are not there yet.”

“Personally, I think he is a hugely talented player. He is on the way up and he will continue to move up because that potential is there,” Wenger said. “He is today very conscious of his qualities as well, which he was not always, and I personally believe he will be a very great player.”

Backup goalkeeper David Ospina is set to stay at the Emirates Stadium for another season after speculation about a move to Fenerbahce.

Wenger said that Ospina needed more convincing to stay as there is no Champions League role to offer him this season — but that the Colombia international could still edge out Petr Cech as his No. 1.

“It was not easy [to make him stay], because of course all these players want to play. They are top-level players, they want to go to the World Cup,” Wenger said.

“But he will get a number of games here and he will fight with Petr Cech. The fight is quite open. At the moment I play Petr Cech but this battle is not won definitely by Petr Cech because I rate Ospina highly and anyway, we play other competitions and he will play.”

How to catch Man City? A way-too-early look at how Premier League rivals can be ready next season
UEFA’s confusing Champions League changes will — once again — benefit only big clubs
Barcelona hit back at Sevilla for Mbappe-Pique meme after Copa del Rey comeback: ‘Football is about respect’
Orlando City, MLS terminate Jonathan Suarez’s contract following arrest
Should Atletico be worried Simeone is following Wenger’s path ahead of Madrid test?