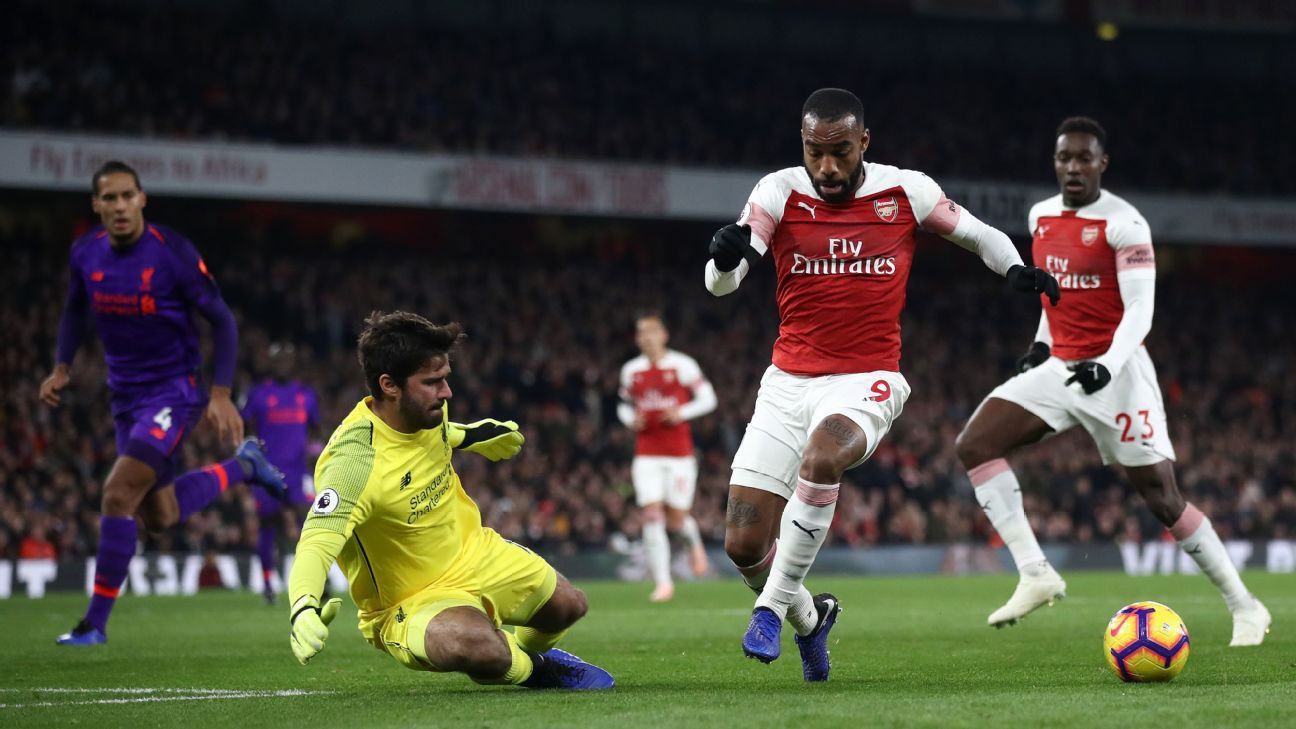 
Three thoughts from an enthralling 1-1 draw between Arsenal and Liverpool at the Emirates:

Alexandre Lacazette struck a late equaliser to extend Arsenal’s unbeaten run to 14 games and deny Liverpool a significant victory in their bid to win the Premier League title.

James Milner’s 62nd-minute strike, after Sadio Mane’s cross was diverted into his path by the palm of Bernd Leno and heel of Rob Holding, looked set to give Liverpool the win that would have moved them three points clear at the top of the table. But Lacazette halted Liverpool’s march with a stunning finish in the 83rd minute, beating Alisson to the ball before curling into the net from a narrow angle.

Lacazette’s equaliser was well-deserved by Arsenal, who more than merited a share of the points at the Emirates. It was a game that showcased the home side’s improvement under Unai Emery this season following Arsene Wenger’s exit at the end of last term. Arsenal were vibrant and ambitious going forward and tighter than usual at the back, but Liverpool also underlined why they believe they can end the club’s 29-year wait for the title this season.

Jurgen Klopp’s men ended the game with good reason to be aggrieved by the ruling out of Mane’s first-half goal for offside when replays showed the forward to be onside. Both teams had opportunities to win the game, but a draw — Liverpool’s third against top-six rivals this season — was a fair result.

2. Torreira is key to Arsenal’s resurgence

Lucas Torreira showed against Liverpool just why he has become so integral to the team being rebuilt by Unai Emery.

Under Arsene Wenger, the absence of a player of Torreira’s tenacity and industry almost became a running joke in the final years of the Frenchman’s reign. His admission that he could have signed N’Golo Kante before he moved to Leicester merely highlighted the gaping hole in Arsenal teams over recent seasons.

But Torreira is now doing for Arsenal what Kante does for Chelsea and Fernandinho does for Manchester City. He destroys, mops up, creates and urges his teammates on, while also displaying that Uruguayan bite and desire that Arsenal have been desperate for. The 22-year-old summer signing from Sampdoria gave the perfect example of his value to Emery’s team with a 32nd-minute interception to prevent the ball dropping to Mohamed Salah just inside the Arsenal half.

Until this season, Arsenal have not had a player capable of sniffing out that kind of danger, arguably since Patrick Vieira left the club over a decade ago. The Arsenal fans clearly know what a difference Torreira has made, too, with the old Vieira chant reworded in the Uruguayan’s honour.

When a group of players accept a bad decision without registering a complaint to the officials, it’s a pretty clear sign that the rulebook has become too complicated, and that was certainly the case when Liverpool calmly accepted Mane’s 18th-minute goal being disallowed.

Mane thought he had put Liverpool ahead when he scored from the rebound after Roberto Firmino’s half-volley had struck the Arsenal post. But as soon as the ball hit the net, assistant referee Simon Long raised his flag, prompting referee Andre Marriner to rule the goal out.

Nobody raised a protest on Liverpool’s behalf, either on the pitch or off it, but replays quickly showed that the officials had got it wrong. Mane was offside when the initial cross to Firmino was played into the penalty area, but he was not interfering with play under the current interpretation of the offside rule.

The Senegalese forward then was behind the ball when Firmino shot. He was also behind the last Arsenal defender, but because he hit the ball in the “second phase” of the move, Mane’s goal should have stood.

Linesman Long got it wrong, but with so many judgments to make in a split second, is it any surprise? The offside rule has become too complicated and everyone would benefit from a return to the old rule that required “daylight” between the last man and the attacker before the flag was raised.