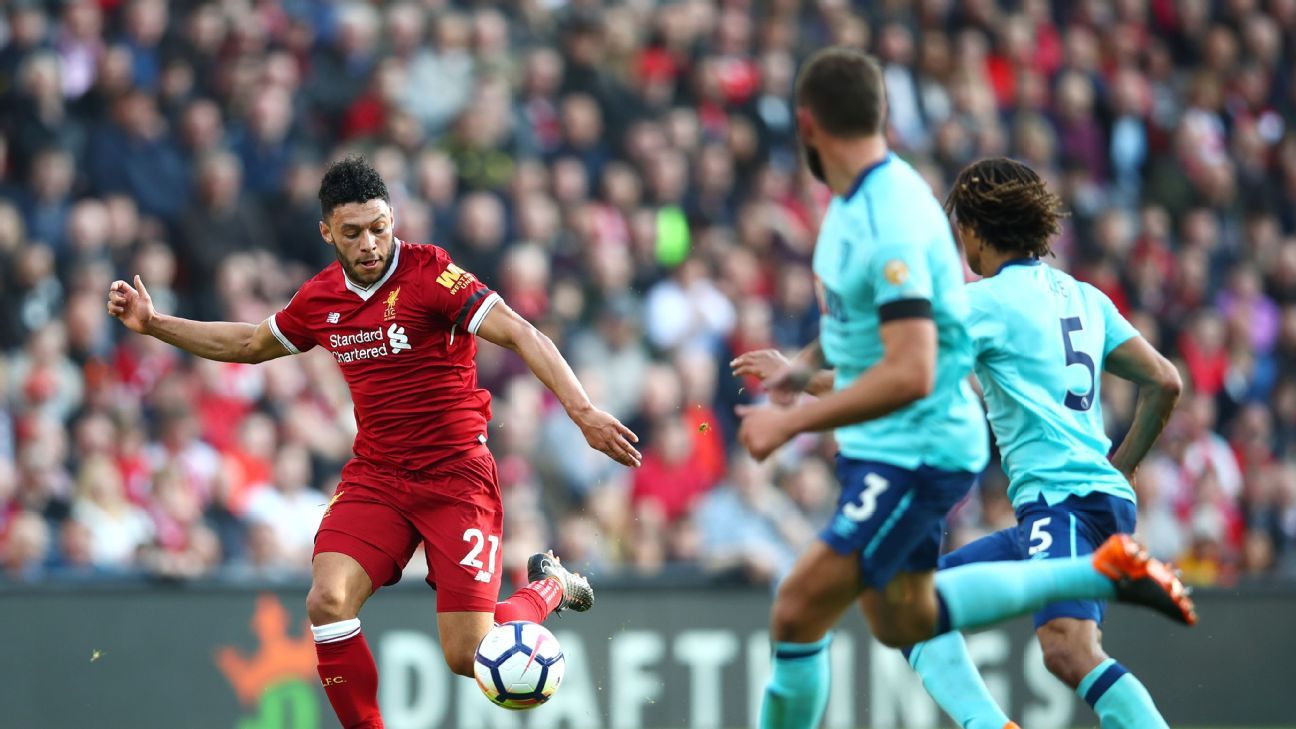 
Liverpool were comfortable 3-0 winners against a timid Bournemouth side that only gave them any kind of difficulty once they were two goals down.

Another goal for Mohamed Salah on a day when he was clearly not at his best. Players expected to be rested instead looked insatiable and tireless. They made it look easy after an exhausting, emotional week in Europe.

They weren’t too clinical in their finishing during a one-sided first half which kept the visitors in the game longer than they deserved to be.

9 — Jurgen Klopp wants to keep the winning momentum going and was rewarded with fine performances all over the pitch. The Champions League has been a great adventure so securing qualification again was given its proper importance.

GK Loris Karius, 7 — A spectator for almost the entire game bar the odd punch clear, he did make a bizarre albeit effective save at 2-0 which spared everyone any late jitters.

DF Trent Alexander-Arnold, 9 — Probably would have been rested if any other full-backs were available but that would’ve denied him the chance to further cement his place in the side. Wonderful coming forward including an inch-perfect cross onto Salah’s head that made the game safe. He also defended stoutly when called upon, with some great interceptions.

DF Dejan Lovren, 7 — Efficient enough without being really tested, he again combined well with the other defenders. Injured late on, hopefully not seriously — and that hasn’t been said a lot during his Anfield career, a measure of how well he’s played lately.

DF Virgil van Dijk, 8 — At ease once again, a bigger rating than Lovren because of his organisation and command that’s made a real difference to the Reds in the second half of the season.

DF Andrew Robertson, 8 — Might have expected to be dropped with an able-bodied replacement to come in but the young Scot is just loving his football at the moment. The whole crowd willed him to score late on but he blazed high and wide, about the only thing he got wrong all game.

MF Jordan Henderson, 8 — Superb in the first half, his passing and tackling were all top-notch. Yes, he was given time and space but exploited that fully. A more routine, less eye-catching display in the second but he did everything necessary to seal an important win.

MF Georginio Wijnaldum, 7 — The quietest of the midfield trio, he did the ugly things well and worked hard while others grabbed the glory. Starting to put in good performances on a regular basis again.

MF Alex Oxlade-Chamberlain, 9 — Had he scored with a scorching, late shot, this might have been his best game for Liverpool so far. Worked hard, hustled opponents and charged forward at every opportunity. Almost set up Roberto Firmino with an outstanding run at 2-0 but wasn’t to be denied as he played an important role when the third goal did arrive.

FW Sadio Mane, 8 — Early goal helped settle his team down, showing great alertness as the keeper saved his first attempt. Full of running and invention, one chipped pass to Salah was sublime although the Egyptian couldn’t finish.

FW Mohamed Salah, 8 — Not his best game but he still wasn’t to be denied. Was marked well by Nathan Ake in fairness, but it seemed as though this week’s Harry Kane controversy was getting to him a bit. His headed goal was brilliantly instinctive, but who’s surprised anymore? His positional sense was still brilliant all night.

FW Roberto Firmino, 8 — Early promise and trickery faded into a bitty performance from the Brazilian. He tried to do too much with one chance at 2-0 but it’s hard to be critical as the unorthodox is what he does best — typified by his cheeky goal late on.

MF James Milner, N/R — Replaced Mane to help seal the win, with one important defensive block and cleverly taking his time over a free kick or two.

DF Ragnar Klavan, N/R — Needed to slot in when Lovren started hobbling and helped keep the visitors at bay when they belatedly began to give Liverpool a few problems.

FW Dominic Solanke, N/R — Brought on too late to make any impression.

Leeds United vs. Arsenal – Football Match Report – November 22, 2020
How to get married and play in a semifinal on the same day!
Diego Maradona will be remembered as one of soccer’s greatest, the sport’s ultimate flawed genius
Pique knee injury leaves Barcelona in defensive woe ahead of Champions League
LA Galaxy duo Efrain Alvarez, Julian Araujo in USMNT squad