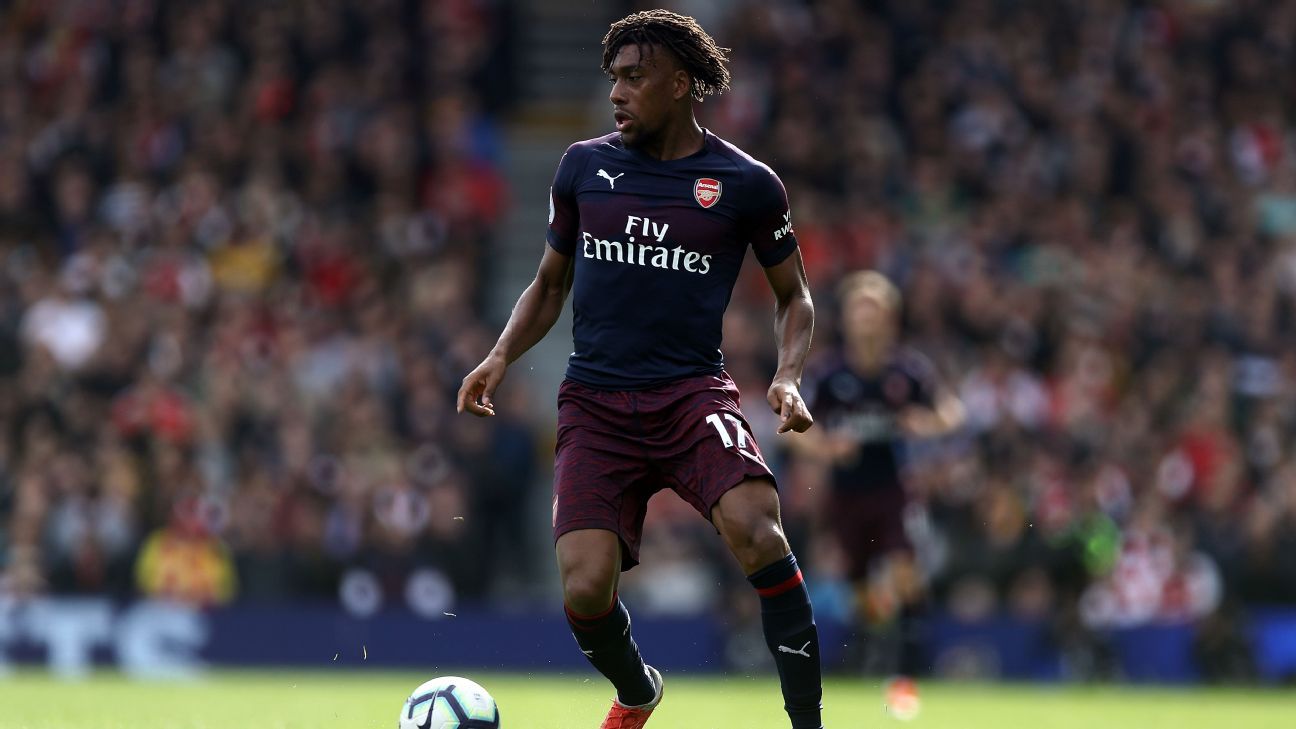 
More confident, more capable, more consistent. A renewal of promise and potential. Growing ever more impressive by the week and shaking off the baggage of a frustrating period of underdevelopment.

Such plaudits might be applicable to Arsenal as a whole since Unai Emery took charge, but if there is a player who is the embodiment of the progress made, it is surely Alex Iwobi.

The 22-year-old did not, like Aaron Ramsey, net the goal of the season so far in the 5-1 win at Fulham — Iwobi was one of the few attacking players not involved in the sumptuous move — and he did not score twice, as Alexandre Lacazette and Pierre-Emerick Aubameyang managed.

Indeed, Iwobi did not even snatch an assist on an afternoon when Arsenal greedily helped themselves. Nevertheless, one of the many abiding memories from the rout at Craven Cottage came courtesy of a player who is enjoying a remarkable renaissance this season.

In the first half, Iwobi casually but brutally embarrassed Fulham wing-back Cyrus Christie with the kind of impudent nutmeg that most footballers can only dream of executing so perfectly. But for the Arsenal man, it was his second in the space of four days having pulled off an even more intricate move in the 3-0 Europa League win at Qarabag. At home and abroad, Iwobi is taking delight in his football again

Some fans will wonder if this can really be the same man who became a lightning rod for criticism under Arsene Wenger. Where once he would have ducked his head and taken an easy option, Iwobi is thriving with creative responsibility and renewed belief.

From nutmegs to tricky dribbles and darting runs past leaden-footed defenders, the joy he derives from taking players on is shining through. The reason for this resurgence is quite clear: Emery’s methods are working wonders on a somewhat unlikely pet project.

After coming on as a 63rd-minute substitute against Watford on Sept. 29 and contributing to two goals, as a dangerous stalemate became a 2-0 victory, Iwobi explained how Arsenal’s new manager has changed his mentality.

“The boss has basically told me if something doesn’t work, keep going and don’t dwell on it,” Iwobi said. “He’s told me to stop being so critical and to just keep trying no matter what happens, no matter if things don’t go as I want them to. That’s given me a lot more confidence to try a few more things, like beat a player, to shoot more.”

On Sunday, Iwobi explained spoke more about life under Emery: “The team spirit is better. The confidence is definitely better. We analyse the games a bit more.”

All of which can be read as an implicit acknowledgment that standards slipped under Wenger. Now that Iwobi finds himself in a personal and collective milieu that brings the best out of him, the results have been fairly astonishing.

Moreover, such excellence calls for the reappraisal of his struggles in the previous two campaigns, when he all too often lacked consistency and confidence and — surely — the natural form fluctuations of youth were exacerbated by insufficient coaching oversight.

Parts of the Arsenal fan base should also recall with some shame those disgraceful moments when frustration with Iwobi’s form spilled over into abuse. While other academy products are afforded patience and understanding, Iwobi was denied both by those who wrote him off. Prematurely, as it turns out.

All of which makes his recent progression especially enjoyable. What is more, the feel-good story could continue, given that Arsenal looked a more viable proposition with Iwobi starting on the left of a 4-4-2 formation against Fulham.

Emery’s understandable attempt to shoehorn Lacazette, Aubameyang, Ramsey and Mesut Ozil into his starting XI — players with bigger profiles and even bigger pay packets — resulted in a series of unconvincing performances earlier in Arsenal’s nine-game winning streak, but it is clear that Iwobi provides balance.

Whether in a 3-4-3 or a 4-2-3-1, or wide in the aforementioned 4-4-2, Iwobi brings rare qualities. He drifts inside to great effect, as seen against Fulham, but also supplies width. Even though he is no traditional winger, he relishes dribbling and taking on opponents. Meanwhile, his contribution to the short passing game favoured by Emery has also been impressive; suddenly Iwobi looks a very important player.

Given the criticism this young player encountered, as well as those long periods spent struggling to find form, when it seemed as though his future lay away from his boyhood club, Iwobi’s return to prominence has been one of Emery’s most pleasing, and symbolic, achievements.