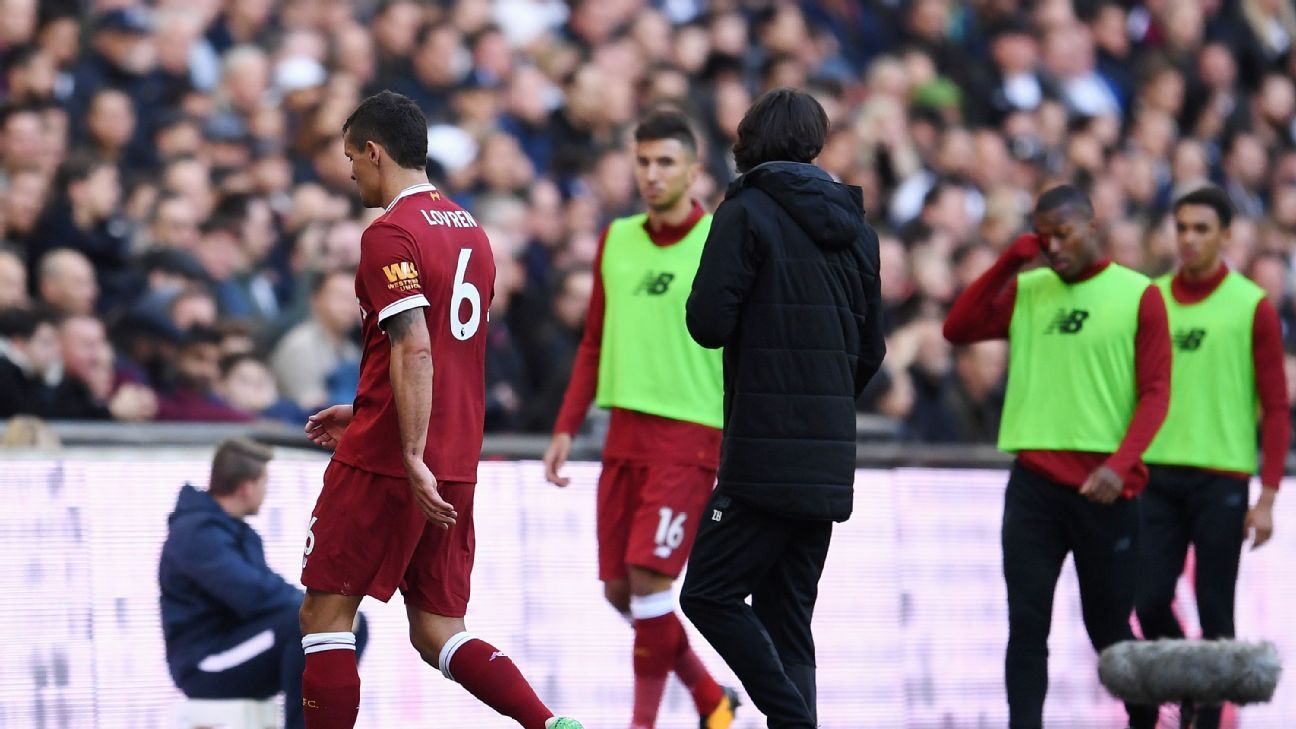 
Liverpool’s loss at Tottenham on Sunday was entirely self-inflicted. Without taking anything away from the Londoners — who did exactly what they needed to do — all four of the goals Liverpool conceded were the direct result of individual blunders by defenders or the goalkeeper, and in some cases both.

It’s easy to have sympathy with Liverpool’s central defenders and keeper when they are exposed by a lack of protection from those in front of them or by poor play from the full-backs, but that was not the case on Sunday at Wembley. There can be no excuses offered for them after this loss, as it’s entirely on them.

Dejan Lovren was the biggest culprit. The Croatian’s decision-making was atrocious and he appeared to be scared stiff of Harry Kane. Twice in the opening 12 minutes he let the England man get in behind him, and on both occasions the consequences were fatal. That’s usually the way with Kane, you can’t make errors like that with him around.

Lovren somehow managed to survive until 31 minutes when Jurgen Klopp finally put him out of his misery and replaced him with Alex Oxlade-Chamberlain. Why it took so long is a mystery, but it’s hard to see any way Lovren can come back from this now.

He’s had numerous low points in his Liverpool career to date and to his credit has always rebounded from them, but this time it feels different. This wasn’t a one off bad day, he’s been poor this season and for many supporters Sunday was the straw that finally broke the camel’s back.

Klopp has always shown faith in Lovren, even to the point of rewarding him with a pay rise and contract extension last season. Had Liverpool landed Virgil van Dijk in the summer though, Lovren was the man most likely to make way for him.

With Liverpool expected to move for Van Dijk once more when the January transfer window opens, the writing was on the wall for Lovren anyway. Given the way he’s been playing this season it’s entirely possible that he will lose his place to someone already at the club.

In fairness, Lovren has been battling a back injury all season and recently admitted that he has had to take pain killers to be able to get through games. On Sunday, it looked like he’d upped his dosage as his decision making was all over the place.

When he was dragged off by Klopp it was almost an act of mercy as much as a necessary tactical adjustment. Can Klopp really send Lovren out there again this weekend at Anfield against a Huddersfield Town side fresh off a win over Manchester United?

No, Lovren surely has to be left out now, but Klopp doesn’t appear to have much confidence in Ragnar Klavan currently either, so that would leave Joe Gomez as the most viable option. The youngster was moved from his right-back spot into the centre following Lovren’s departure at Spurs, and although two more awful goals were conceded, neither were down to Gomez.

The 20-year-old deserves his chance but there is a reason why it’s so rare to see top clubs playing youngsters at centre-back. It’s the position that most requires experience. This is why many young centre-backs will initially be introduced to the team at full-back or even in midfield until they mature.

As a rule, defenders improve with age because they read the game better and make fewer mental mistakes. Lovren would seem to be an obvious exception to that rule, although focusing solely on him would be letting his partner Joel Matip off the hook. He too was dreadful against Spurs and it was Matip’s error that gifted the all-important third goal to Deli Alli.

Liverpool had gotten back into the game at 2-1 but Matip’s weak header effectively handed the game back to Spurs. While Lovren is clearly an issue, Liverpool handed Spurs two more goals after he had been replaced, and it’s worth mentioning that he was not on the field when the Reds shipped five goals at Manchester City either.

There is no magic quick fix for Liverpool’s defensive problems but one thing now seems clear; Lovren is a busted flush and his place is up for grabs.

If Liverpool give Gomez a run of games at centre-back he will almost certainly make mistakes but right now they have nothing to lose. When their experienced defenders are making schoolboy errors, they may as well let the young lad have a turn. At least Gomez might learn from any mistakes he makes, and also in his favour is that he has the kind of recovery speed that can help him overcome errors.

Had Nathaniel Clyne not been sidelined then the decision to move Gomez into the centre would be a much more straightforward one. In the absence of the England right-back Klopp has rotated Gomez and fellow youngster Trent Alexander-Arnold at the position. Moving Gomez to the centre would therefore mean a rethink at right-back, but at least Klopp does have other options at full-back, such as Jon Flanagan and James Milner.

In the centre, he is fast running out of choices. The failure to address this last summer is now biting him hard.