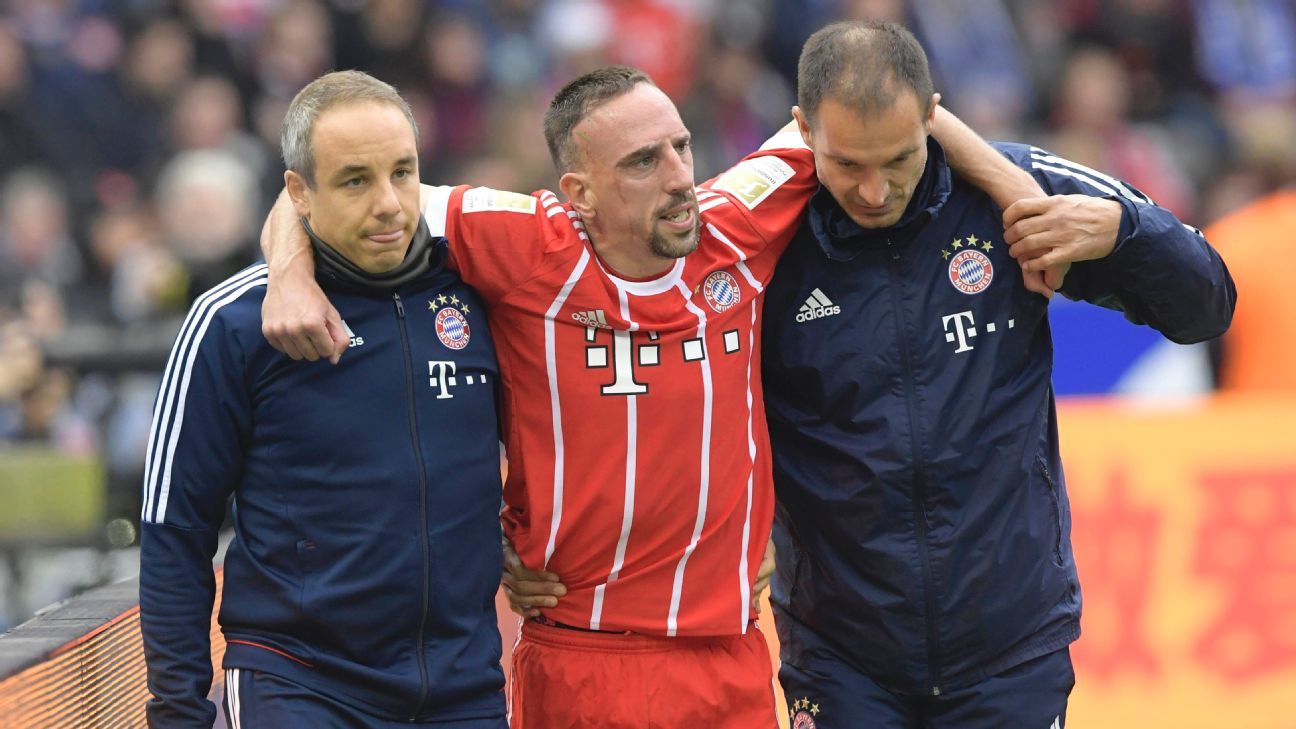 
MUNICH — Franck Ribery’s return to France for Wednesday’s high-profile Champions League meeting with Paris Saint-German was an opportunity for the 34-year-old Bayern Munich legend to remind the French public of his dazzling trickery and talents. At least that was Ribery’s intention.

German sports magazine Kicker reported that Ribery (signed for €25 million from Marseilles in 2007) had purchased 40 tickets for family and friends for the mouthwatering game. It must have been soul-destroying for Ribery when Carlo Ancelotti took the decision to relegate Bayern’s longest-serving player to the bench on his return to his homeland. Ribery’s assorted guests and millions around the world were obliged to watch their hero languish on the bench for 90 minutes as Neymar & Co. embarrassed Bayern 3-0 on European football’s biggest club stage.

In the aftermath of the Paris mauling, having unceremoniously dumped Ancelotti the following day, president Uli Hoeness confirmed five Bayern players had turned against the Italian maestro. Ribery was likely one of the famous five.

Things soon took a change for the worse for Ribery. Against Hertha Berlin on Sunday, after Bayern had squandered a two-goal lead for the second consecutive game for the first time in their Bundesliga history, Ribery stepped on the ball just after the hour mark and twisted his knee awkwardly. He had to be helped from the pitch by two medics. It looked like knee ligament damage, never a great scenario, but especially not at the age of 34.

On Monday, Ribery’s worst fears were confirmed. He faces several months on the sidelines with a torn lateral ligament.

This is a player who, like his veteran wing partner Arjen Robben, has suffered a catalogue of knee and ankle injuries in the past decade. It was injury that made him a bit-part player under Pep Guardiola. He also has a history of tempestuousness, and it was inevitable that he would fall out with Guardiola, just as he did with Louis van Gaal.

Ironically, despite being accused of being a prominent Ancelotti “king slayer,” Ribery was full of praise for the laid-back Italian on his appointment, saying he was a gift to the club — at the same time making a sly dig at the Catalan.

That said, Ribery is one of the best, brightest and trickiest players the club has ever had, while winning seven Bundesliga titles, five DFB cups, the Champions League and the FIFA Club World Cup, to name just a few milestones. He also can boast a European footballer of the year award in 2013, the same year he lifted the Champions League with the Bavarians at Wembley.

Trying in vain to keep his enfant terrible happy, Ancelotti explained why he couldn’t play in every game: “I’ve told Franck: Listen, you are like a Ferrari — and you can’t drive a Ferrari every day — only on Sundays. You cannot play when it’s not a Sunday.”

Ultimately, Ancelotti’s fast car analogy was to no avail. Ribery’s nose was put further out of joint after failing to start as Bayern clinched the title with a 6-0 win in Wolfsburg in April.

Last month’s strop when substituted in the Champions League against Anderlecht was the straw that broke the camel’s back for Ancelotti. Ribery traipsed from the furthest end of the pitch back to the dugout at a funereal pace, seemingly soaking up the whistles from the fans booing Ancelotti for having the temerity to take off their favourite.

Ribery lapped it up before launching his shirt into the dugout. He went on social media the next day to defend his actions but issued no direct apology to Ancelotti. At most clubs, a player would be hit with a fine for such open dissent. Ancelotti must have known his days were numbered as player power took over at Bayern Munich.

However, if you look at Ribery’s performances this season — no assists and no goals in six Bundesliga games — he has become a shadow of the player that beat Lionel Messi and Cristiano Ronaldo to the 2013 European footballer of the year award. You would have to say Ancelotti was right to banish him to the bench in Paris.

But his legacy at Bayern remains intact. He still is immensely popular with the fans, despite his very public falling out with more than one manager.

Ribery will turn 35 in April, with his current deal due to expire next summer, when, all being well, he will have clocked up 11 years’ service at Bayern Munich.

Nevertheless, at his age and bearing mind his blighted fitness record, he’s just one injury away from the end of his career, and you wonder how many more recoveries he has left in him.