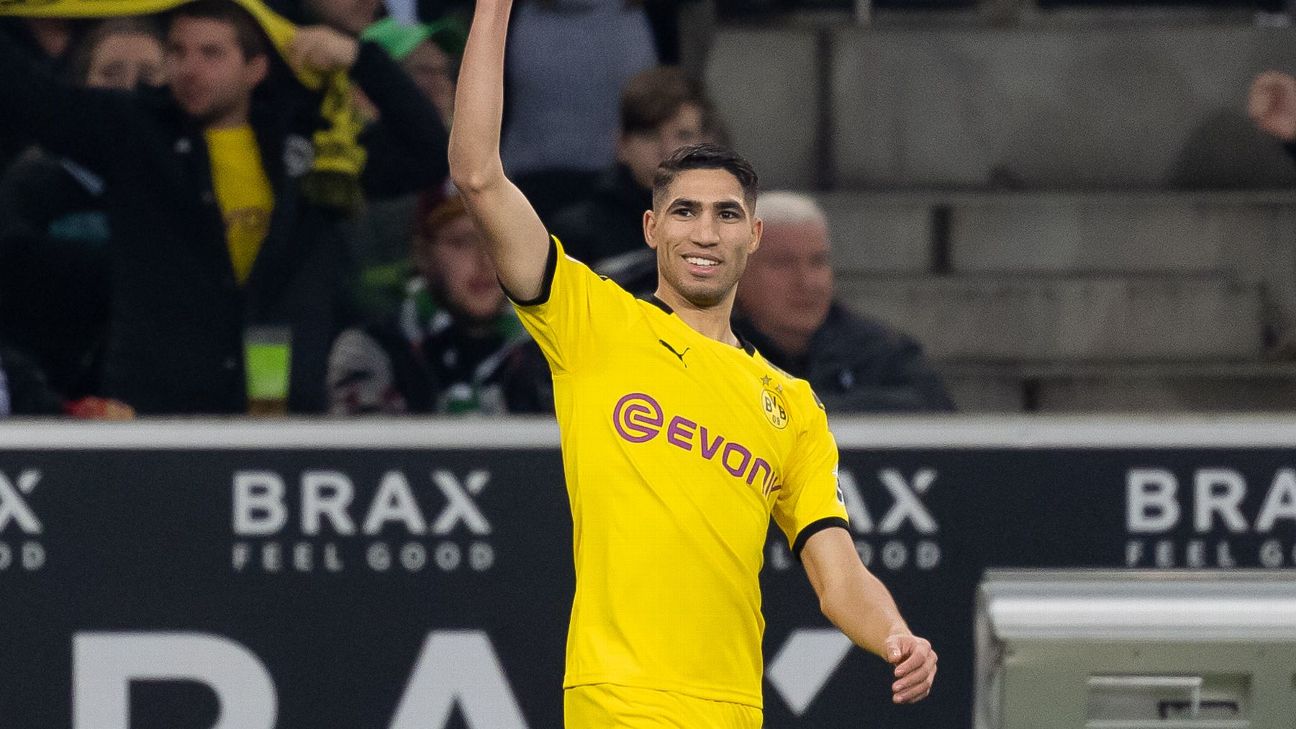 Africa’s stars were at the heart of the action across the Bundesliga this weekend, with Achraf Hakimi, Ramy Bensebaini and Liverpool loanee Taiwo Awoniyi among the players in key roles as German football returned behind closed doors.

The Bundesliga had been on a two-month coronavirus-imposed hiatus before finally being given the green light to resume, and a broader audience watching on television was treated to a fascinating weekend of action and the latest chapter in an engrossing title race.

Borussia Dortmund re-opened the season with a rip-roaring 4-0 thumping of rivals Schalke 04 in the Revierderby, shorn of the 81,365 fans who would typically have created a raucous atmosphere in SignalIduna Park, with Morocco right-back Hakimi catching the eye for the hosts.

The wideman’s future had been the subject of intense speculation during the absence of live action, as his loan stay from Real Madrid draws to a close, and various potential suitors appear to be lining up for his signature.

On the evidence of Saturday’s showing, it’s clear to see why some of Europe’s sides are angling for the 21-year-old.

The nonchalance and exuberance of Erling Haaland’s opener — and his subsequent subdued celebration — may have dominated the headlines, but Hakimi was irrepressible, constantly getting the better of his opposite number, Bastian Oczipka.

Viewers posited on social media whether he was a better prospect than Liverpool’s Trent Alexander-Arnold after one notably boundless run during the first half, as he controlled a long ball with his head, outmuscled two opponents, and sent in another dangerous cross for Haaland.

While Hakimi perhaps lacks Alexander-Arnold’s subtle creativity, he excels at unsettling a defence, and his combination of powerful, direct running and elegance are reminiscent of Brazil great Cafu in his pomp.

By contrast, it was an outing to forget for Schalke’s Senegal defender Salif Sane, who could do little about the opener as Thorgan Hazard’s cross evaded him, but he shirked his responsibilities for Dortmund’s third, as the Belgium international put the match beyond the visitors.

While Dortmund’s victory fuelled their title aspirations, coach Lucien Favre confirmed on Saturday that Franco-Ivorian defender Dan-Axel Zagadou will be out for the rest of the campaign with a knee ligament injury.

Dutch-Nigerian wunderkind Joshua Zirkzee — one of the revelations of the Bundesliga season — was an unused substitute as Bayern Munich maintained their four-point advantage at the top of the table with a 2-0 victory over promoted Union Berlin.

The capital club handed a start to Nigeria’s Anthony Ujah, although he could make little impression on Bayern’s central-defensive pairing of Jerome Boateng and David Alaba, failing to hit the target with either of his two efforts on goal.

Over at the Commerzbank-Arena, Algeria’s Bensebaini was among the goals as Borussia Monchengladbach closed Saturday’s action with an impressive 3-1 victory at Eintracht Frankfurt.

The defender was an Africa Cup of Nations winner last year, and he has excelled in the Bundesliga since signing from Stade Rennais in August.

He was a key figure for Gladbach as they led the table in late 2019 — memorably netting twice in a victory against Bayern — and added the visitors’ third from the penalty spot after Alassane Plea was brought down.

His goal capped off an exceptional display, as the 25-year-old also provided the assist for Gladbach’s second, a delightful low cross for Marcus Thuram to tap home, and made a series of vital defensive contributions.

Malian Almamy Toure was a competent presence for Eintracht at right-back, although reported Arsenal transfer target Evan Ndicka struggled on the left and was withdrawn late on after picking up a booking.

Gladbach moved up to third on 52 points, replacing RB Leipzig, who were held by SC Freiburg as the only one of the top six clubs to drop points.

The typically vibrant Christopher Nkunku was a subdued presence in midfield, and Ademola Lookman had little impact after being introduced for Nordi Mukiele at the break in a 1-1 draw.

On Monday, Bayer Leverkusen moved within one point of Leipzig — and off the Champions League qualifying berths — with a comfortable 4-1 triumph away at Werder Bremen.

Franco-Malian Moussa Diaby was one of the visitors’ most influential performers during his 62-minute showing, weighing in with two assists — for Kai Havertz and Mitchell Weiser — as Peter Bosz’s side reaffirmed their European credentials.

For the first, he set up Havertz for a leaping back-post header just before the half-hour mark after swerving past his opposite man and sending in a delicious right-footed cross.

He rounded off a bright and vibrant showing in the 61st minute with another excellent cross for defender Weiser to slam home a header from close range.

Mid-table Hertha Berlin enjoyed one of the results of the weekend as they defeated Hoffenheim 3-0 away, although they were helped on their way by the hosts’ hapless centre-back Kevin Akpoguma.

The German-Nigerian conceded a miserable own goal to break the deadlock after 58 minutes, losing concentration and mis-hitting the ball into his own net after connecting with Peter Pekarik’s wayward shot.

The contest had been in the balance up to that point, but Hoffenheim crumbled thereafter, and Akpoguma’s opposite number, another Nigerian, Jordan Torunarigha, rounded off the win when he set up Matheus Cunha for Hertha’s third.

At the foot of the table, Jamilu Collins‘ Paderborn held Fortuna Dusseldorf 0-0 away, a result that helps neither of the relegation-threatened pair as they look to drag themselves out of the dropzone.

Finally, to Cologne, where Nigeria’s Awoniyi ended his season-long goal drought and inspired a superb Mainz comeback as they took a point that may prove vital in the relegation dogfight.

Liverpool loanee Awoniyi has endured a tricky time on loan in the Bundesliga, struggling for game time and making little impact in the opportunities that have come his way.

He was introduced with 34 minutes on the clock on Sunday, with Mainz trailing 2-0, and halved the deficit five minutes later when he capitalised on lax Koln marking and netted after being played in by Congolese defender Ridle Baku.

Awoniyi signed for Liverpool in 2015, and has subsequently spent time on loan in the Netherlands and Belgium without making his mark at Anfield.

“I’m really happy about scoring my first goal for Mainz,” Awoniyi said, per the club’s official Twitter handle. “We came back very well as a team today, and fought our way back into the match.”

Eleven minutes later, Mainz were level, as Cameroon’s Pierre Kunde Malong burst past four opponents, picking up speed as he entered the box, before finishing coolly beyond Timo Horn.

“I had the ball and I saw that I had some space to shoot,” Kunde said. “I feel good, it’s great to have helped the team by scoring that goal.”

It was one of several moments of excellence from a fine weekend by Africa’s talents in the Bundesliga, with the continent’s stars clearly relishing a return to action.