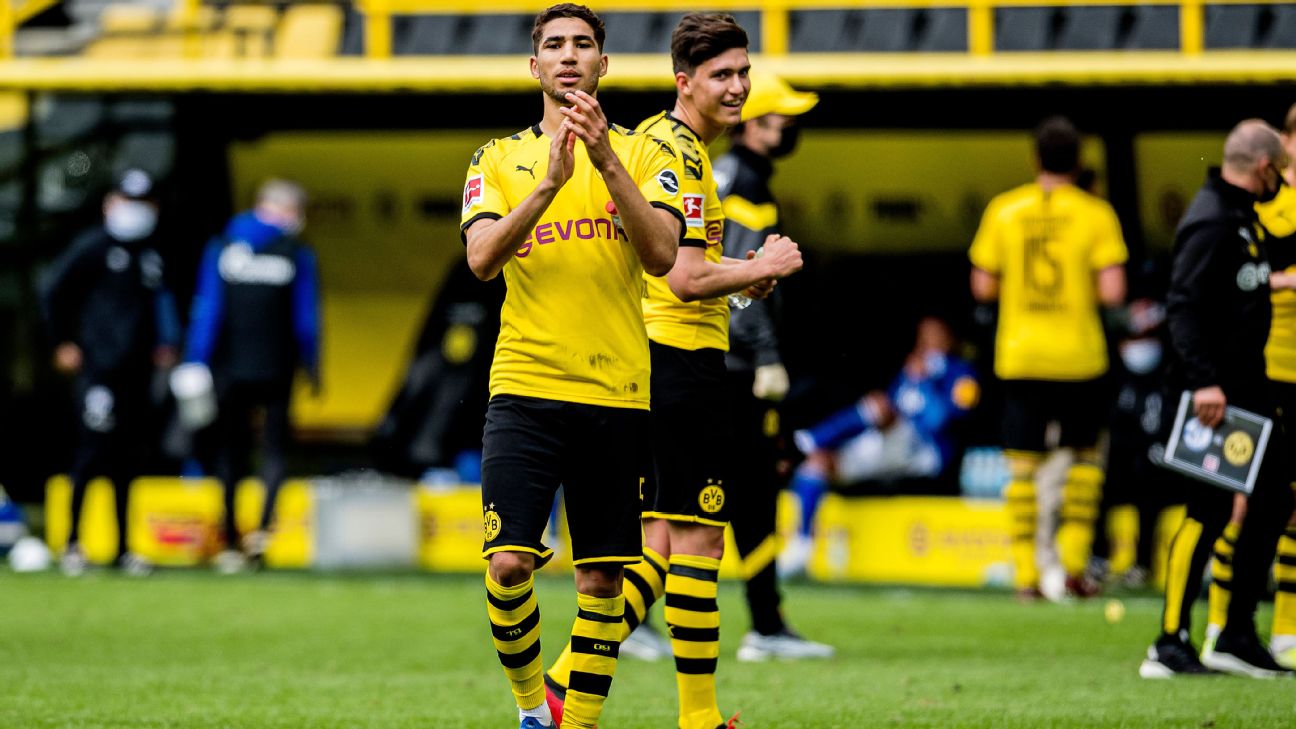 Noah Sarenren-Bazee and Achraf Hakimi found the net as the German Bundesliga continues to pick up pace after the two-month suspension due to the coronavirus pandemic.

Nigeria’s Bazee had hitherto struggled to make his mark in the league since making his debut for Hannover in the German top flight back in the 2015-16 season. He has since made just 19 Bundesliga appearances across his time with the Reds and Augsburg — having joined the latter last summer — amassing just 704 minutes of playing time, averaging just 176 minutes per calendar year in the division.

He finally broke his duck for his new employers, scoring 17 minutes after coming off the bench for Ruben Vargas just before the hour mark in a 3-0 victory over troubled Schalke 04.

Collecting a loose ball outside the hosts’ half, he evaded the challenge of Jonjoe Kenny, cut inside the hapless Salif Sane, and curled a fine right-footed finish past Markus Schubert. Eduard Lowen had given the visitors the lead in the sixth minute, and Sergio Cordova rounded off a convincing victory at the death.

Nominally a right-sider, the strike demonstrated Bazee’s capacity for cutting inside from the left, and highlighted how he could prove to be a valuable asset for Gernot Rohr’s Super Eagles.

“I think everyone saw today how much we wanted to win,” Bazee told Augsburg’s official website, as the club ended their seven-game winless streak.

“We’ve really been growing together as a team in the past few weeks and we got our reward for that today.

“We worked hard all week after the game against Wolfsburg and it showed today with our pressing.

“We definitely took a step in the right direction.

“We’re all just really happy and of course, so I am with my goal today.”

Had he been watching, the Super Eagles head coach may have been impressed with centre-back Felix Uduokhai — arguably Augsberg’s outstanding player.

The defender had a goal ruled out by VAR during the Fuggerstadter’s returning 2-1 defeat by Wolfsburg the previous weekend, but he showcased his defensive qualities on Sunday, registering eight clearances and winning seven aerial duels during a particularly sturdy showing.

The win takes Augsburg up to 12th on the table on 30 points, six clear of the bottom three, while Schalke’s malaise continues.

Without Amine Harit — absent with a ligament injury — Schalke failed to make the most of their whopping 71.2% possession; they have now lost four of their past five and are without a win in nine, tumbling to eighth place in the process.

On Wednesday, Augsburg welcome struggling Paderborn — who were held 1-1 by Hoffenheim at the weekend — as they look to make it back-to-back wins.

The match may also see Bazee going head to head with Nigeria left-back Jamilu Collins, who was responsible for a late clearance as Paderborn held off Hoffeheim, for whom Togo’s Ihlas Bebou was ineffective.

The draw does little for Paderborn’s hopes of avoiding the drop, as they remain six points behind 16th-placed Fortuna Dusseldorf.

Ahead of Der Klassiker between Dortmund and Bayern Munich, BVB reaffirmed their title credentials with a comfortable 2-0 victory over Wolfsburg.

Hakimi was again irrepressible, scoring from a Jadon Sancho assist in the 78th minute as the duo broke at pace on the counter.

Raphael Guerreiro had earlier opened the scoring just after the half-hour mark, in another commanding display from Dortmund’s full-backs.

It was yet another delightful performance by the Morocco youngster that should again get the rumour mill spinning as the end of his loan deal from Real Madrid approaches, and he’s now had a hand in 14 goals (four scored, 10 assists) this term, underpinning his valuable offensive contribution.

Dortmund will need him at his best for their title showdown at home against Bayern Munich on Tuesday.

Joshua Zirkzee came off the bench as Bayern crushed Eintracht Frankfurt 5-2 on Saturday, in a game to forget for the visitors’ African trio Almamy Toure, Evan N’Dicka and Djibril Sow.

Bayern can extend their advantage to seven points on Tuesday, when Dortmund will be without Franco-Ivorian defender Dan Axel Zagadou, who’s ruled out for the rest of the campaign due to injury.

Borussia captain Marco Reus is also absent with injury, while Mats Hummels is a doubt after picking up a knock against Wolfsburg.

Elsewhere, after a stale draw against SC Freiburg, RB Leipzig thrashed Mainz 5-0 to move back up to third.

Mainz — inspired by Taiwo Awoniyi and Pierre Kunde Malong — had bounced back to take a point against FC Koln the weekend previously, but they failed to cope with rampant RB Leipzig, who were 3-0 up and cruising inside the first half.

Liverpool target Timo Werner has hogged the headlines for his hat-trick, but Christopher Nkunku also was much brighter on Leipzig’s left after a muted showing against Freiburg.

Dayot Upamecano returned to the starting XI — and picked up another yellow card — having missed the game against Freiburg due to suspension, while Ademola Lookman and Nordi Mukiele were introduced from the bench by Julian Nagelsmann.

Leipzig move up to third, replacing Borussia Monchengladbach, who loat 3-1 at home to Bayer Leverkusen — now up in fourth — on Saturday.

Algeria’s Ramy Bensebaini has been one of the top defenders in the German Bundesliga this season, and he has already contributed more goals (five, with one assist) in 13 league outings than he produced in the entirety of his 101-match Ligue 1 career (four).

He again held his own, albeit in a damaging display by Gladbach, making a series of key defensive contributions and winning seven aerial battles after getting the nod ahead of rival Oscar Wendt.

He also took four shots — no player on the pitch registered more — but only one hit the target.

Leipzig host Hertha Berlin on Wednesday, while Gladbach and Bayer travel to Bremen and Freiburg on Tuesday and Friday respectively.

Dusseldorf’s match with troubled Schalke on Wednesday is also one of the midweek fixtures to watch, with the hosts having extended their unbeaten run to five matches with their 2-2 draw at Koln on Sunday.

Ghana’s Kasim Adams came off the bench for Uwe Rosler’s Fortuna, as they continued to boost their survival hopes.