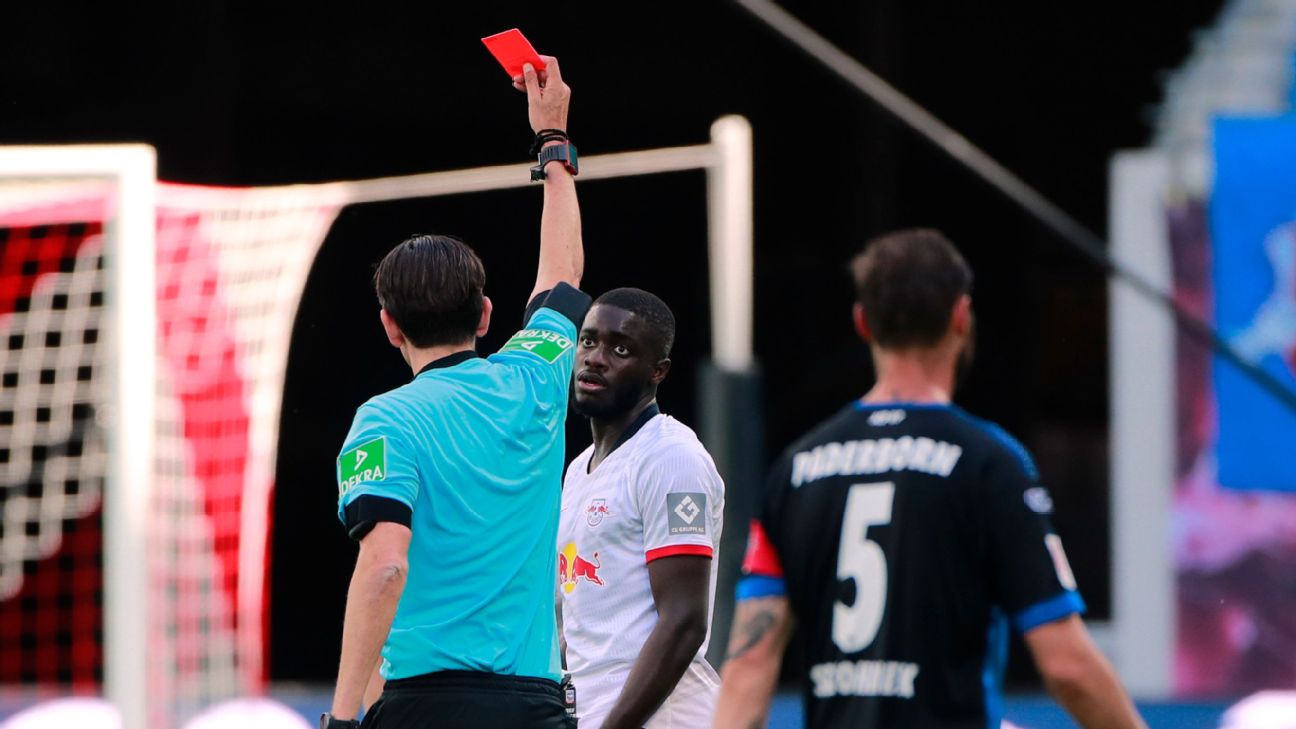 Dayot Upamecano saw red this weekend as RasenBallsport Leipzig’s faint title hopes faded further in a draw with Paderborn, while Cameroon’s Pierre Kunde Malong was among the goals again as Mainz pulled clear of the dropzone with victory at Eintracht Frankfurt.

It’s been a frustrating return to action for Leipzig centre-back Upamecano, who was initially suspended following the re-launch of football after the coronavirus break, and has again fallen foul of referees.

The Franco-Bissau-Guinean defender was shown a second yellow card late in the first half when he kicked the ball away in a needless act of defiance that was quickly punished by the officials.

The 21-year-old’s behaviour — considering he was already on a booking — may prompt some of his rumoured suitors to reassess whether he is ready for a move to a European giant; both Manchester United and Arsenal have been linked to his signature.

His first-half display certainly left Leipzig in the lurch, even if they had taken a 27th-minute lead through Patrik Schick following some fine work in the build-up from Christopher Nkunku.

However, Upamecano’s dismissal breathed life into Paderborn, and after holding their opponents to a one-goal advantage, they gradually increased the pressure and struck back at the death when captain Christian Strohdiek finished emphatically from close range.

Right-back Nordi Mukiele was a lively presence in wide areas for Leipzig, although losing two points late on leaves Julian Nagelsmann’s side four points behind Borussia Dortmund in second, and 11 behind leaders Bayern Munich.

The leading pair were the only sides in the top five who took all three points this weekend, with Achraf Hakimi and Jadon Sancho dovetailing joyously at times in Dortmund’s 1-0 victory over Jordan Torunarigha‘s Hertha Berlin.

Bayern took another step towards the title with a rampant victory over Bayer Leverkusen, who, without Kai Havertz, failed to make ground on near rivals Leipzig and Borussia Monchengladbach.

Moussa Diaby was ineffectual down the hosts’ left, while young Burkinabe centre-back Edmond Tapsoba endured a chastening encounter as he and his fellow defenders struggled to contain Robert Lewandowski, Thomas Muller and Kingsley Coman.

Dutch-Nigerian wonderkid Joshua Zirkzee was an unused sub for Bayern.

Having netted only twice – both in the November rout of Hoffenheim – Cameroon’s Kunde has added two more goals to his seasonal tally since the restart, striking again in Mainz’s 2-0 victory at Eintracht Frankfurt on Saturday.

It was another African who put the visitors ahead, as Moussa Niakhate powerfully headed home Daniel Brosinski’s corner two minutes before the pause.

It was the defender’s first goal since he scored against Leipzig 13 months ago, and only his second ever in the German top flight.

Mainz had earlier gone close through Nigeria’s Taiwo Awoniyi, who’s struggled to build on his effort against Cologne in mid-May, while Jean-Philippe Mateta thought he’d added a second after the break only to be denied by the linesman.

Kunde eventually wrapped up the three points late on, finishing calmly beneath Kevin Trapp after tearing through the hosts’ backline.

The powerful midfielder took a knee after scoring, joining with other players around the Bundesliga to amplify the global movement against inequality, racism, and police brutality. The win takes Mainz up to 31 points, three points clear of Fortuna in 16th.

Struggling former champions Werder Bremen remain 17th on 25 points after losing 1-0 at home against Wolfsburg, for whom returning Congolese centre-back Marcel Tisserand came off the bench to play his first Bundesliga minutes since January.

Wideman Bazee, proved to be a constant nemesis for the victors’ left-back Benno Schmitz, who was hauled off before the half-hour mark having already been booked.

Bazee was fouled five times during the contest — evidence of how much trouble he caused the Cologne backline as they struggled to contain their bogey team — and earned a penalty after being brought down in the box.

The subsequent spot kick was spawned by Florian Niederlechner as Timo Horn made an excellent stop.

Bazee ended the game with four completed dribbles, and his compatriot — Cologne right-back Kingsley Ehizibue — may well have been delighted that he didn’t have to contain the winger.

Augsburg’s Nigerian defender Felix Uduokhai, who signed a permanent deal with the club last week, also featured for the entirety of the contest.

For Union Berlin, an early assist from Ujah for Robert Andrich to open the scoring heaped further misery on struggling Schalke.

The powerful frontman, long since discarded by the Super Eagles, won six aerial battles during the course of the contest, created two goalscoring opportunities, and also tested the opposition goalkeeper on occasion.

Unfortunately for Union, he wasn’t able to add a second, and Schalke — who pushed centre-back Salif Sane into the midfield — equalised through Jonjoe Kenny before holding out for a point.

The Royal Blues have also confirmed that Hispanic-Equatoguinean captain Omar Mascarell will miss the rest of the season after suffering a setback in training, according to David Wagner.

Finally, another one of Europe’s biggest leagues returned to action this week, as Portugal’s Liga NOS restarted following a three-month suspension.

Morocco maestro Adel Taarabt was in action for league leaders Benfica as they were held by lowly Tondela, a result which takes them one point clear of FC Porto.

The Dragons missed the opportunity to leapfrog their fierce rivals as they fell to a shock 2-1 defeat by Famalicao, although they can take encouragement from Benfica’s wobble, as the reigning champions have won just one of their last six.

Moussa Marega led the line for Porto, while Cameroon’s Africa Cup of Nations winner Victor Aboubakar was unable to net an equaliser after being introduced for Tiquinho Soares inside the final 10 minutes.