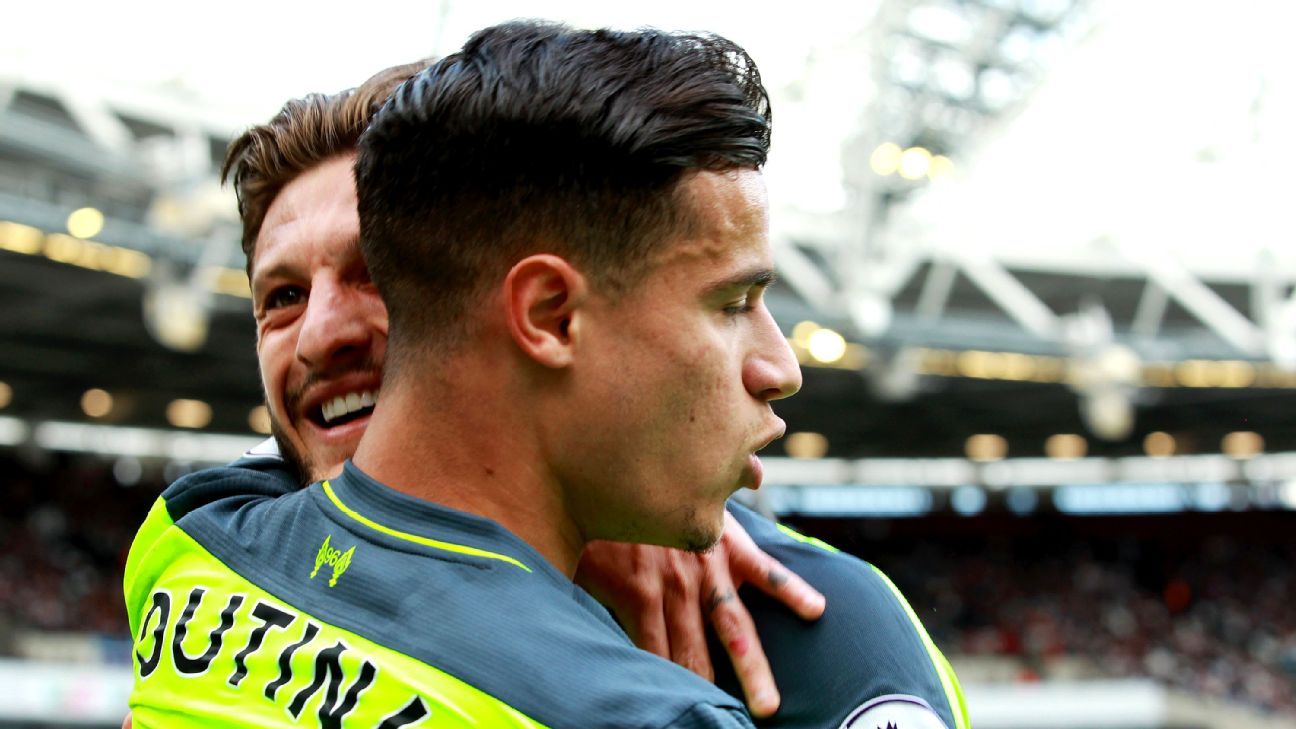 
Earlier in the season Liverpool’s attacking quartet of Roberto Firmino, Sadio Mane, Mohamed Salah and Philippe Coutinho were dubbed “the Fab Four” by the Merseyside press. Poor Adam Lallana, meanwhile, seemed to be cast in the “Pete Best” role, as the forgotten, fifth Beatle.

Lallana hasn’t played in 2017-18 after picking up a thigh injury in preseason, but he’s back in full training and may well be available for selection next week when his former club Southampton visit Anfield.

The return of the energetic England international strengthens Liverpool significantly as he brings qualities that no one else in the squad possesses. Not only is Lallana the leader of the pressing game, he is also the most adept midfielder at making runs ahead of the front men; both have been lacking at times this season.

Ideally, Coutinho would have taken Lallana’s midfield spot, but the Brazilian himself has missed games too and, when he has been available, he’s often had to play in the front three due to Mane missing time through injury and suspension.

If Mane can stay on the pitch then Liverpool’s front three virtually picks itself, meaning Coutinho and Lallana could be vying for the one midfield spot. It’s a nice situation but the challenge is finding a way to get Lallana and Coutinho into his starting lineup without having to move the Brazilian into the front three.

There appears to be no easy way of doing it without leaving the team looking somewhat top heavy, but there should certainly be occasions — especially at home — where it is possible to play all five in the same team. Just having them all available for the first time instantly makes Liverpool stronger, regardless whether they all start or not.

So far this season Klopp has not rotated too much, but that will surely change over the coming weeks as the games come thick and fast. The return to fitness of some of his injured stars will give him more options, both in terms of tactics and personnel.

Klopp surprisingly switched to a 4-4-2 formation last weekend at West Ham and the change worked as Liverpool looked generally solid for most of the game while always carrying a threat on the counterattack as they comfortably recorded a 4-1 win.

Salah was used as a central striker for the first time, with Mane and Alex Oxlade-Chamberlain on the flanks. This tactical switch allowed Klopp to solidify his defence by reigning in his full-backs in a little and also having his two central midfielders sit deeper than usual.

It was a significantly different approach to what we usually see from Klopp and it was encouraging to see him mix things up a little, as Liverpool had become rather predictable.

However, while it worked well that day and is certainly worth trying again in the future, it’s difficult to see where either of Coutinho or Lallana would fit, let alone both of them. In Klopp’s regular 4-3-3, though, it is possible to include both in the midfield three alongside Jordan Henderson or Emre Can.

While that does look a little lightweight defensively, is that really so important, especially at Anfield? Most of Liverpool’s opponents have so far been too scared to even cross the halfway line, hence the Reds having only conceded one goal at home compared to 16 on their travels.

And, if teams want to sit back and defend, then having both Lallana and Coutinho in the midfield three will surely help Liverpool break that down.

Of course, away from home or against the better sides it’s a different story and Klopp will surely be a little more pragmatic, particularly after the success his team enjoyed on the counterattack at West Ham.

Liverpool have shipped goals — 16 in six games — at an alarming rate away from home, despite mostly fielding a workmanlike midfield trio of Henderson, Can and Georginio Wijnaldum. Adding Coutinho and / or Lallana to that is unlikely to add much solidity, but it would significantly add to an already potent attacking threat.

The most likely scenario is that some star players might find themselves taking turns to sit it out away from home as Klopp looks to be a little less “gung ho” on his travels and he can rotate without having to weaken his lineup too much, particularly given the recent contributions of the improving Oxlade-Chamberlain.

But there must also be a temptation get the quintet out there at the same and try to blow teams away in similar fashion to Manchester City. Their team is packed with attacking players yet their goals against column has not suffered too much.

While Mane and Salah are now out on their own in their importance to the team, Lallana is every bit as influential as Firmino and Coutinho. It’s time for him to remind people that Liverpool have a “Famous Five,” not a “Fab Four”.