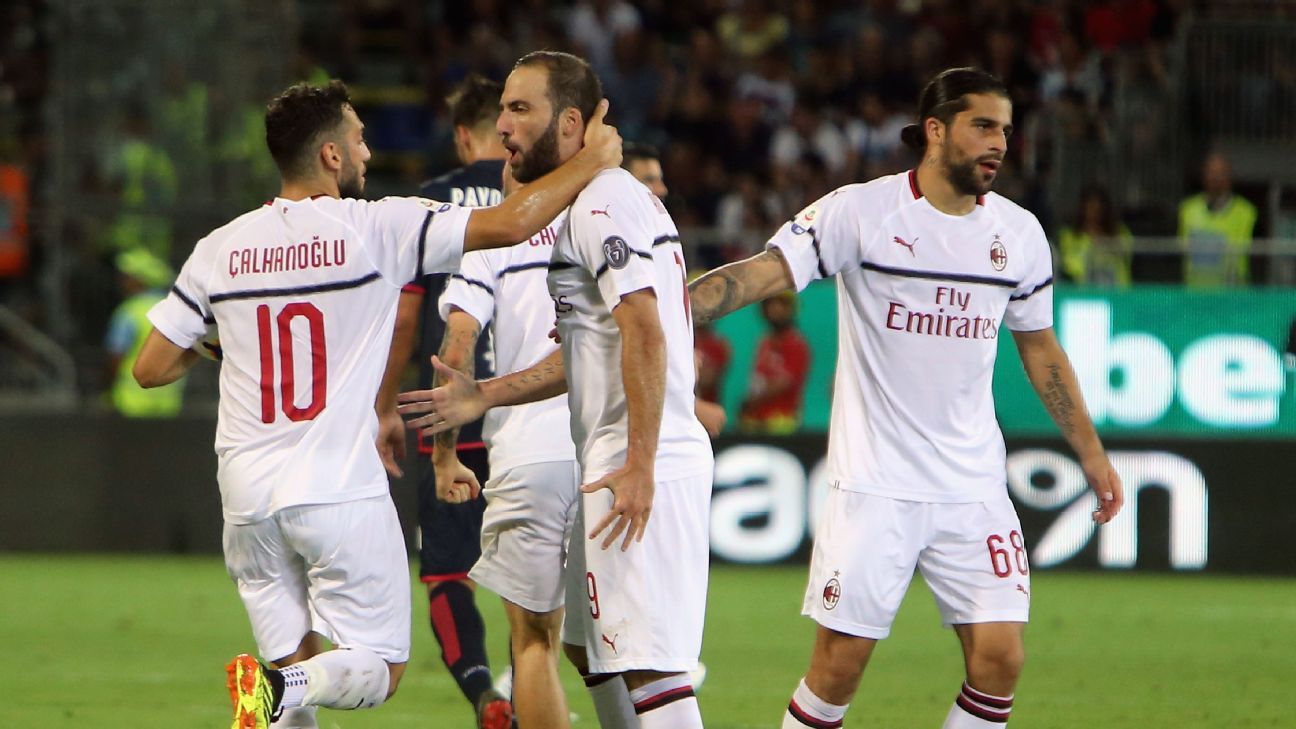 
AC Milan disappointed on Sunday night, as they were held to a 1-1 draw by Cagliari after making a poor start to the game. The Rossoneri saw Gonzalo Higuain score his first goal for the club to salvage a point, but it was undoubtedly a frustrating night for Gennaro Gattuso.

Milan settled after a lacklustre opening 20 minutes and began to dictate the game by dominating possession. In turn, they reacted well to the setback and looked in control for the most part, while it would be have been a real boost for Higuain to make his mark.

The slow start ultimately proved costly, as Milan were unable to match Cagliari’s intensity and paid for it. Further, they failed to show the necessary quality in the final third to take advantage of their possession and complete a comeback thereafter.

6 — Gattuso made understandable decisions as the game went on, albeit it could be argued Milan looked less like scoring. Nevertheless, he has to take some level of responsibility for the decision to play a high line early on and for failing to ensure that his players were able to stand up to Cagliari’s fast start.

GK Gianluigi Donnarumma, 6 — Did well when called upon for the most part, but perhaps should have done better to keep out Joao Pedro’s effort as it squeezed in underneath him and into the back of the net.

DF Davide Calabria, 6 — Energetic performance from the youngster as always, as he constantly made runs forward down the right flank to offer width. Defended well in general in a positive display.

DF Mateo Musacchio, 6 — After a shaky start to the game, the backline improved and got to grips with the Cagliari attack as things proceeded. However, neither Musacchio nor his central defensive partner dealt with Leonardo Pavoletti’s aerial threat throughout, and that was a real problem.

DF Alessio Romagnoli, 6 — Uncharacteristically sloppy in possession on occasion while also failing to deal with Pavoletti effectively. Nevertheless, improved as the game went on as Milan started to control the tempo.

DF Ricardo Rodriguez, 6 — The Switzerland international will always produce a relatively decent performance, but Milan need more from him. Whether it’s attacking with confidence or not looking for the easy pass, he continues to offer a limited influence.

MF Franck Kessie, 7 — A solid display from the combative midfielder, as he was also influential in the build-up to Milan’s goal with his pressing and energy. Perhaps needed to show more composure at times in possession, but overall he was one of the better performers on the night.

MF Lucas Biglia, 6 — Did well to offer a defensive shield for the backline at times, but Cagliari bypassed the Milan midfield too easily early on with Biglia being overrun which left them open. His limited influence in possession was also exposed late on with his inability to play key passes to build attacks.

MF Giacomo Bonaventura, 5 — A wasteful display, as he spurned two great opportunities to score in the first half. That could have swung the game for Milan, while he generally struggled to have a positive influence in attacking situations.

FW Suso, 6 — Was undoubtedly a constant threat for Milan and the most likely source of creating a breakthrough. However, for the number of deliveries he had, he failed to make the most of it and aside from glimpses of class, he wasn’t decisive.

FW Gonzalo Higuain, 7 — Cut an isolated figure early on that would have raised fears that Milan wouldn’t get him involved. To his credit, though, he kept plugging away up top on his own with smart runs down the channels and with his link-up play. Rewarded with his first goal for the club as he showed a prolific edge to get on the score sheet.

FW Hakan Calhanoglu, 5 — On his day, Calhanoglu can be the creative spark Milan need to win games. Unfortunately for the Rossoneri, he wasn’t at the races on Sunday night, as he struggled to get going and wasn’t able to pull the strings or offer balance by providing a threat down the left flank.

MF Tiemoue Bakayoko, 6 — Much improved from his previous outing at Napoli, and it would have helped that he was deployed in a more natural role in a positive appearance to help build confidence and settle.

FW Samu Castillejo, N/R — Looked lively down the left flank and wasn’t afraid to get involved with the Cagliari backline. However, was missing that touch of class to find an all-important breakthrough.

DF Diego Laxalt, N/R — Similarly to Castillejo, he provided Milan with a lift in energy down the left flank in the latter stages.