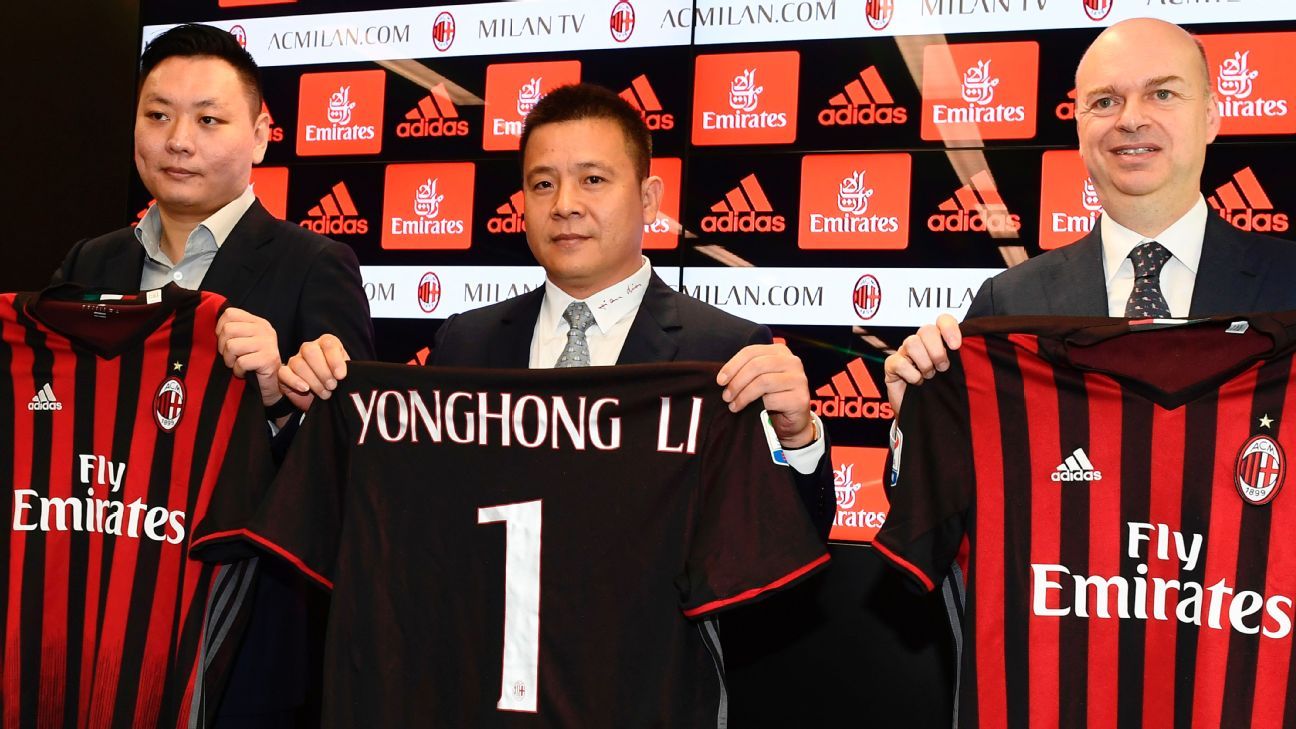 
Away from the World Cup, between Milan, New York, London, Nyon and Lausanne, decisions are being made that will affect the future of AC Milan, winners of seven European Cups. It was a messy situation to begin with, and one that’s only getting messier. Here’s an attempt to make sense of it:

Q: So, first things first, Milan have been kicked out of European play, right?

A: Yes, at least for now. UEFA’s Club Financial Control Body (CFCB) announced Wednesday that they will be excluded from European competition for one season. Milan have one appeal left, with the Court of Arbitration for Sport in Lausanne, and we should get an answer from them by the middle of July at the latest.

A: Yes and no. In reality, they breached UEFA’s Financial Fair Play parameters for the three seasons up to June 30, 2017, so most of the overspending is actually down to the previous owner. Milan chief executive Marco Fassone points out that it’s not their fault that they inherited a financially precarious position. But it’s a bit more complicated than that …

A: Well, UEFA have something called a Voluntary Agreement (VA) for precisely these situations. A new owner takes over and wants to invest, but is limited because the previous owners accumulated losses. So he puts together a business plan whereby in the first few seasons FFP is breached but then revenue grows, and by Year 3 and Year 4 they meet their financial targets. And if UEFA agrees that it’s a viable business plan, then new ownership is home free.

Q: So why didn’t Fassone do that?

A: He tried. But UEFA didn’t find his plan credible and rejected his request for a VA. His revenue projections, apparently, were way too optimistic. And he probably wasn’t helped by the fact that Milan spent some $200 million last summer, which made them one of the biggest spenders in Europe. Splashing so much cash before you even knew if you were going to be allowed to do it wasn’t the cleverest thing to do.

Q: Indeed. But other teams have breached in the past and not been kicked out of Europe. Why are Milan being picked on?

A: It’s true that in most cases UEFA offer teams a “Settlement Agreement” (SA) if there’s a breach. That’s what happened to Manchester City and Paris Saint-Germain in 2014. Under an SA, you still get to play in European competition, but you have certain sanctions like fines, limits on squad size and transfers and, crucially, you have to hit certain financial targets in future years. But here Milan ran into another problem, one to do with their ownership situation.

Q: Li Yonghong isn’t the billionaire people thought he was?

A: There has been plenty of debate about that. But what we know for certain is that when he bought the club for some $800 million (including $250 million of debt) he borrowed some $350 million from a hedge fund, Elliott Management, at hefty interest rates. He needs to repay that by October, otherwise Elliott take over. UEFA felt that the risk of a default was too high to enter into an SA, which is supposed to be a binding medium-term agreement. And actually, the way things are going, Li could default even earlier.

A: He borrowed around $35 million from Elliott to inject equity into Milan and needs to repay that by July 6. Milan say it won’t be a problem, but, hey we’ve heard that tune before. And that’s why Fassone and Li are working on a Plan B.

A: Well, first they tried to refinance their loan with Elliott, turning it into a five-year term. Elliott, as you’d imagine, said no. Then they tried to borrow money from elsewhere to repay Elliott. Again, no. Then they looked for investors willing to buy a chunk of the club from them. But, as you’d imagine, nobody in their right mind is going to give Li hundreds of millions unless they get control of the club. So that’s why they entered into discussions to go and sell the whole thing and get out. Which, for the right price, they might do.

Q: Really? So who is going to buy it?

A: Tons of people have been rumoured, the only solid names that have come out are two American billionaires. The Ricketts family, who own the Chicago Cubs, issued a statement via PR company, and Rocco Commisso, who owns the New York Cosmos, has spoken openly about it. Negotiations are ongoing, but they haven’t been easy. Still, you’d imagine Li would want to make a deal.

Q: And if no deal gets done?

A: Then Elliott takes over. And it’s anyone’s guess. They can either run the club themselves, simply strip all the assets to pay themselves back or, possibly, sell it to someone else. Whatever they choose, it will be a great deal for them. My guess, though, is that they’ll sell. Possibly to the same groups who are negotiating to buy Milan now.

Q: OK, so it’s not so bad for Milan, right? It’s not the apocalypse?

A: No, it’s not the apocalypse, but it’s far from good, either. They will have basically wasted 18 months, accumulated more losses (which will come into the FFP reckoning next year) and been banned from Europe (unless CAS overturns UEFA’s decision). Hopefully this is a lesson learned for Italian football: New owners should not be allowed to take massive risks with clubs, especially not massive, historic ones like Milan.

Q: While I have you and you’re in an FFP frame of mind, why have PSG escaped punishment after signing Kylian Mbappe and Neymar for all that money?

A: They haven’t. They haven’t been judged on that yet. FFP works in three-year cycles that end on June 30, and the Neymar and Mbappe deals happened after that. So the books on the 2017-18 season don’t close until Sunday. What did happen was that PSG were assessed for the three years leading up to June 30, 2017, and were found not to be in breach (although the value of certain sponsorships with Qatari-related businesses were cut for FFP purposes).