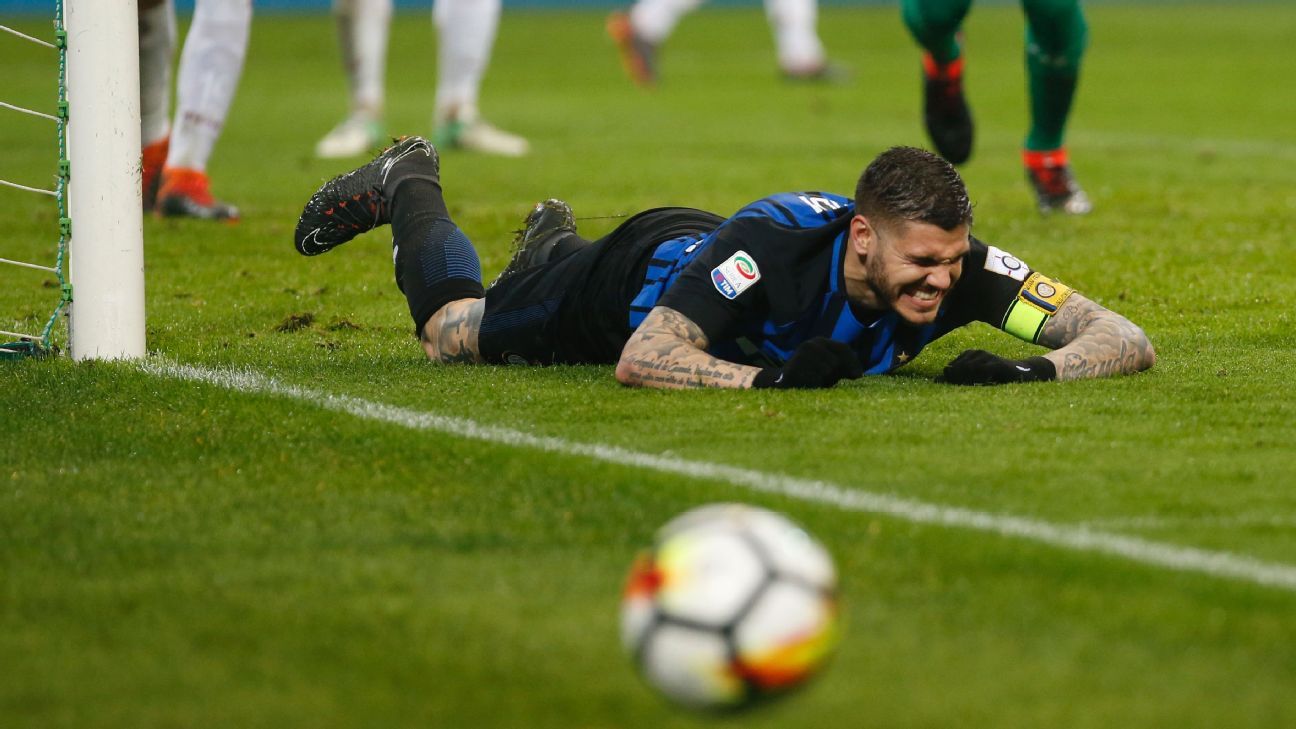 
AC Milan kept their slim Champions League football hopes alive despite being held to a goalless draw by Inter Milan at the San Siro.

Mauro Icardi missed two gilt-edged chances from close range as Inter looked the most likely to score but Milan held on to remain eight points behind their fourth-placed city rivals with eight Serie A matches left.

Both sides had efforts ruled out for offside, with Icardi denied by a tight decision via Video Assistant Referee in the first half while Patrick Cutrone’s acrobatic effort was disallowed in the second period.

Before the match, Inter gave their arch rivals a bouquet of flowers in honour of former England international and Milan midfielder Ray Wilkins, who died on Wednesday morning at the age of 61, before a Franco Baresi – a former team-mate – paraded a shirt which had ‘Wilkins 8’ on the back.

Alessio Romagnoli prevented Inter from breaking the deadlock within the opening 90 seconds when Rafinha picked up a slack clearance from Ricardo Rodriguez inside the Milan penalty area, but he could only fire straight at the Italian centre-back.

The Nerazzurri continued to pile on the pressure as Ivan Perisic found Marcelo Brozovic but he dragged his effort just wide of the far post.

Antonio Candreva fired a shot straight at Gianluigi Donnarumma from a tight angle, which the Milan goalkeeper could not hold, before a half-cleared cross fell to Brozovic on the edge of the area but his measured effort flew wide of the target.

However, the Rossoneri almost took the lead when a brilliant free-kick from Hakan Calhanoglu was glanced on by Leonardo Bonucci but Samir Handanovic managed to claw the ball out with an outstanding one-handed save.

That sparked Gennaro Gattuso’s side and a good passing move between Calhanoglu, Franck Kessie and Giacomo Bonaventura found Patrick Cutrone in the penalty area but his tame effort was easily collected by Handanovic.

Perisic fired straight at Donnarumma following a quick counter-attack before Icardi thought he put Inter ahead seven minutes before half-time.

A neat reverse pass from Candreva set the Argentinian striker free, who composed himself to slot under Donnarumma, however the goal was chalked off by VAR for offside.

After the restart, Perisic almost put Nerazzurri ahead in fortuitous fashion when his far-post cross hit the crossbar with Donnarumma well beaten.

Inter should have taken the lead after 57 minutes following a quick counter which led to Icardi finding Candreva on the right wing, who drilled a cross back to the striker inside the middle of the six-yard box but he somehow missed the target.

Inter went close once more when Brozovic picked out Perisic after having too much time in midfield, but his driven cross to find Icardi at the far post was parried by Donnarumma into the path of Roberto Gagliardini, who blazed wide after last-ditch defending by Rodriguez.

Cutrone thought he put Milan ahead with a spectacular bicycle kick with 20 minutes remaining but he was correctly ruled offside, while his replacement Nikola Kalinic headed over from close range late on.

But there was one last chance for Inter in the third minute of stoppage-time when Joao Cancelo fired in another low cross for Icardi, who had the goal at his mercy, but he could only slot wide.