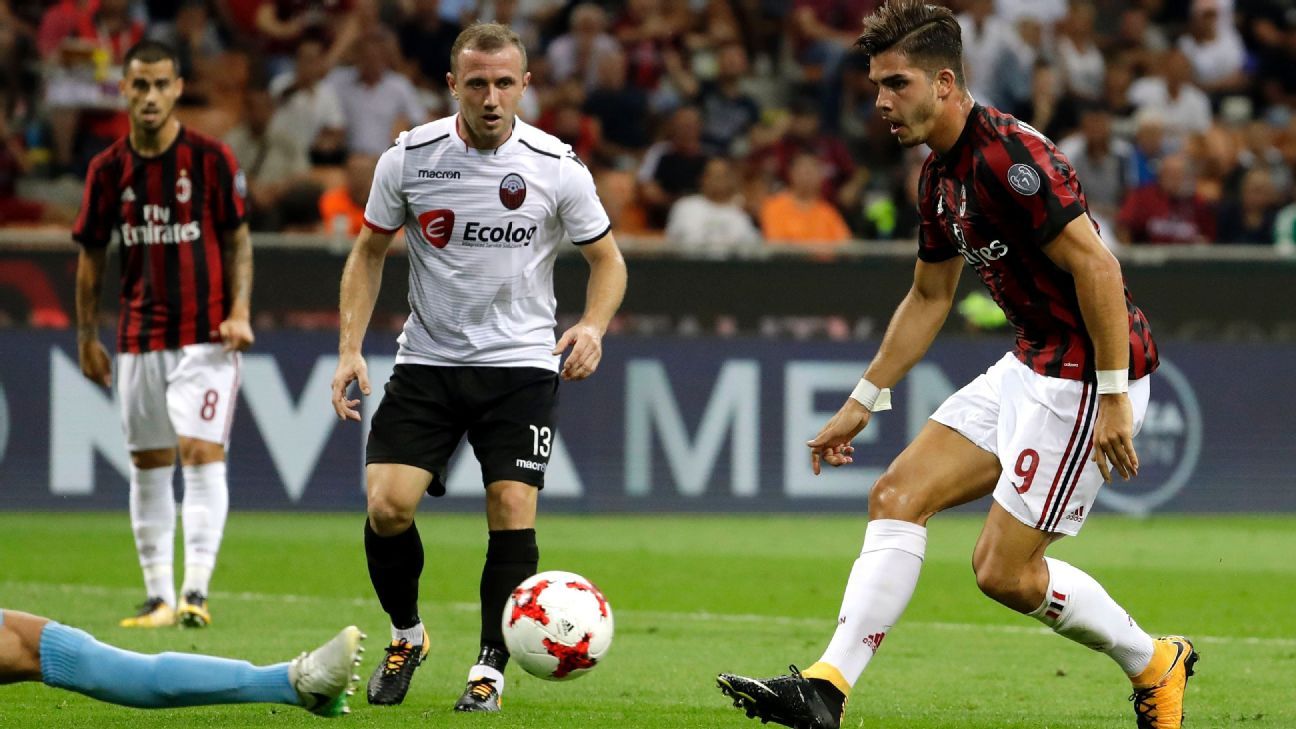 
AC Milan turned on the style as they secured a comprehensive 6-0 win over Shkendija in their Europa League playoff first-leg clash at the San Siro on Thursday night. Braces from Andre Silva and Riccardo Montolivo coupled with goals from Fabio Borini and Luca Antonelli ensure that the Rossoneri go into the second leg with a commanding lead.

Milan made their superior quality count as they all but secured their place in the Europa League group stage with a commanding win. While some individuals are still short of full match fitness, this was a perfect test and confidence boost ahead of their Serie A opener this weekend.

Perhaps being overly critical, Milan should have had more goals. Shkendija rarely threatened as the hosts dictated proceedings, and there were chances for them to make the scoreline even more comfortable. Giacomo Bonaventura’s late injury could also prove to be a huge blow.

8 —  With Sunday’s clash with Crotone in mind, coupled with having four games in 10 days, Vincenzo Montella is set to rotate his lineup. The Italian tactician got the balance right on Thursday night as the personnel on show produced what was needed, now it remains to be seen if his changes pay off at the weekend.

GK Gianluigi Donnarumma, 6 —  It was a quiet night as he was largely limited to being a spectator, although there was a nervy moment when he raced out from his goal. Will need to be a little more careful.

DF Andrea Conti, 7 —  Full of energy and with quality on the ball to match, it was an impressive outing from the right-back as he linked up well with the likes of Franck Kessie and Suso while grabbing an assist.

DF Leonardo Bonucci, 7 —  Looked a little off the pace early on, but was never really tested by the visitors. Marshalled the backline well after what looked to be an inspiring pre-match team talk, and was impressive in possession too.

DF Cristian Zapata, 7 —  Similarly to Bonucci, had little to do in terms of defensive work. Nevertheless, remained alert throughout as he made some timely interceptions when needed, and looked comfortable overall.

DF Luca Antonelli, 7 —  Not the best defensive display in the first half as Shkendija enjoyed their best moments down his side of the pitch. However, did brilliantly to constantly break forward to offer an outlet and scored too in a positive performance.

MF Franck Kessie, 8 —  His physical strength, coverage of the pitch and quality on the ball all combine to make him a certain star in this side. Wasteful on occasion when breaking into the box, but another dominant display.

MF Riccardo Montolivo, 8 —  The midfield stalwart receives plenty of criticism when he fails to deliver, but on this occasion he stepped up and performed. Aside from his two goals, he was much better in possession too.

MF Hakan Calhanoglu, 7 —  Started off a little slow as he’s still catching up in terms of fitness, but as he settled his quality shone through. Worked hard for the team, and while his clever passes didn’t always find their intended target, he’s going to be a real creative force in this side moving forward and will offer goals too.

FW Suso, 8 —  The Spaniard continues to dazzle with his ability on the ball. Suso was always a threat as one of Milan’s main attacking outlets on the right wing, and he looks set to be a pivotal figure for Montella again this season.

FW Andre Silva, 8 —  Scored two great goals to boost his confidence, and probably should have had at least one more. Aside from the brace he pressed hard off the ball and dropped deep to showcase his ability to help build attacks too. Hugely reassuring to see him get off the mark to kick-start his Milan career.

FW Fabio Borini 7 —  Still struggling to have a decisive impact in games, but his hard work paid off this time round as he managed to get on the scoresheet. Borini’s still not the most popular of signings, but Montella values him and he’ll have an important role.

MF Giacomo Bonaventura, 6 —  The night was soured as he limped off with an injury late on having looked bright in his short spell on the pitch.

DF Ignazio Abate, 6 —  Came on to give Conti a rest, and added defensive security and a fresh pair of legs on the right flank.

FW Patrick Cutrone, N/A —  Drew a great save out of Kostadin Zahov late on, and had a decent impact on the game in the closing stages.