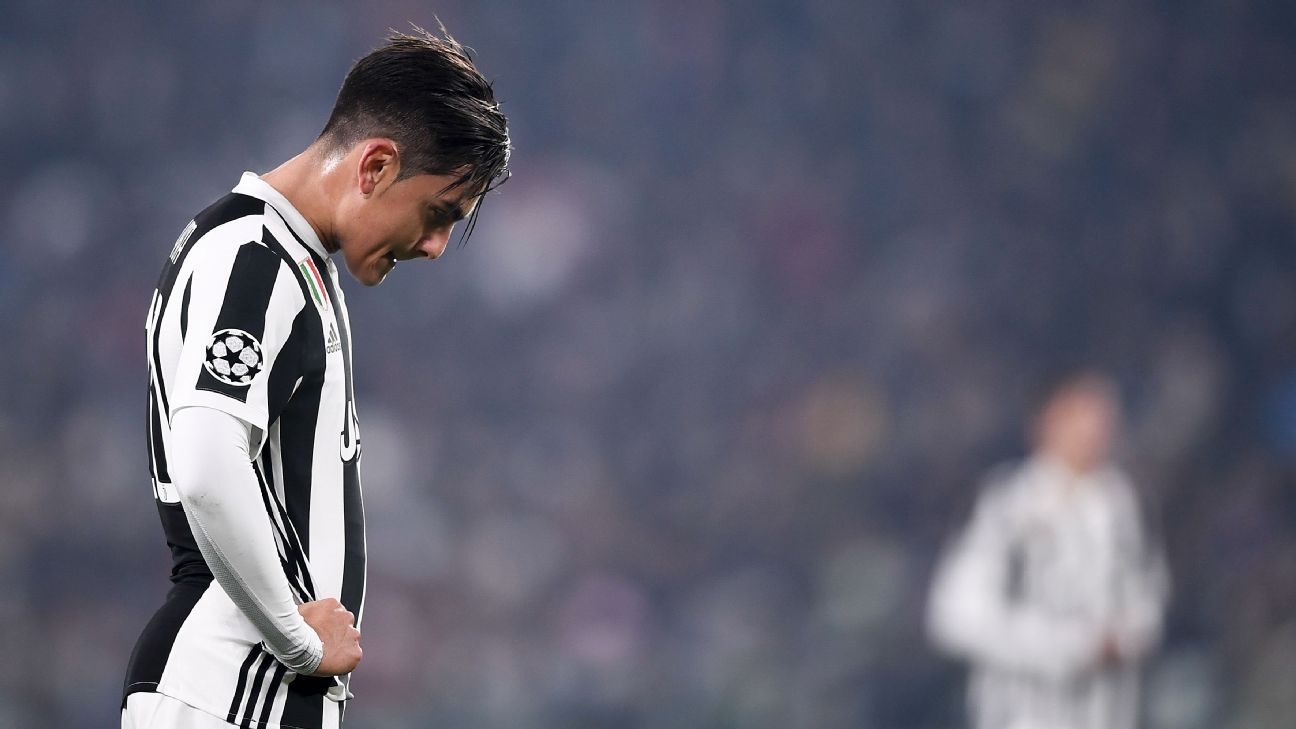 
Juventus legend Alessandro Del Piero didn’t agree with the decision to leave Paulo Dybala on the bench for the Derby d’Italia against Inter Milan last week. “Conceptually, my No. 10 has to play the big games,” he said.

If your star player is short of fitness it doesn’t matter. And if he hasn’t scored in a while, what difference does it make? On talent alone, he has to start. Can you imagine Zinedine Zidane dropping Cristiano Ronaldo for a Clasico or Ernesto Valverde doing the same with Lionel Messi? Of course not.

It’s a strong argument, but here’s the counter to it. While it came as a surprise to see Dybala’s name absent from the teamsheet on Saturday evening, it was hardly a shock. Taken off after an hour of the 2-0 Champions League win over Olympiakos in Athens four days earlier, the papers were unanimous in their assessment of his performance: he was the worst Juventus player on the pitch.

No improvement was discernible when Dybala came on for the final quarter of an hour against Inter either. If anything, Juventus lost balance for five minutes as they adjusted to a change of system and the lack of ballast provided by Sami Khedira.

What it did for Allegri, unintentionally, was vindicate the selection choice he made. Rather than explain it in tactical terms, making the excuse that he wanted an extra man in midfield to guard against the threat Inter posed on the counter-attack, Allegri wasn’t about to ignore the elephant in the room. The riposte he had for Del Piero was hard to quibble with.

“You don’t see the training sessions,” Allegri said respectfully. “You’re not there. Paulo improved exponentially [at the start of the season], but for a month and a half now he’s been trying to get his fitness and his confidence back. He hasn’t lost his quality but there are other players in better condition.”

For a game like the one against Inter, which Allegri expected to be physical, he prioritised the beast (Gonzalo Higuain either side of Mario Mandzukic and Juan Cuadrado) over the Old Lady’s beauty. Dybala was not the only high profile player on the bench: Alex Sandro and €80m worth of summer signings Douglas Costa and Federico Bernardeschi were all huddled together, keeping the bench warm.

While Juventus could only draw 0-0, the team Allegri picked did enough to win the game. And had they done so it would not have stopped the questions about Dybala. For all the talk of an involution in La Joya‘s decisiveness, seven of Higuain’s last 11 goals have been set up by Dybala, including the winners away to Napoli and Milan. Conspicuous by their absence, though, are the goals expected of Dybala himself.

It feels like a long time ago now, but Dybala found the net 12 times in his first eight appearances in all competitions this season. Only one player in the history of Serie A — Antonio Angelillo, all the way back in 1958 — had ever started a campaign in more prolific fashion.

Remarkably given the records they have shattered over the years, Messi and Ronaldo have never started a season with eight goals in their opening four league games; the last player to do it in Europe’s top five leagues was Wayne Rooney for Manchester United six years ago.

Il Corriere della Sera was talking about Dybala as if he were in the X-Files: “A martian in Italy.” The 24-year-old was truly out of this world and, after attracting global acclaim for his performance against Barcelona in April, it seemed Dybala would be going to the next level. Indeed, many considered Italy now had its own rival to Neymar, Paul Pogba, Kylian Mbappe, and Kevin De Bruyne for the Ballon d’Or in a post-Messi and Ronaldo era.

For the first time in six years, the centre of gravity at Juventus looked to be definitively shifting away from its world famous defence to the attack because of the pull of Dybala’s talent. Saturday’s 0-0 did not change the fact this is the most free-scoring Juventus side since the 1950s. Nor has Dybala’s lean spell of just two goals in his last 10 games (15 in all competitions.)

What has happened then? Juventus’ general manager Beppe Marotta thinks it has to do with the expectations Dybala raised back in August and September, saying: “There’s a lot of pressure on him because, having got us used to the extraordinary, he now gets criticised when he plays ordinary.”

Dybala covered up a lot of the cracks at Juventus earlier in the season; he often took the team on his shoulders. The effort involved must, to a certain extent, have taken it out of him and the correctional measures Allegri has applied perhaps haven’t helped. Juventus have used more players and experimented with more systems than any other team this season. All of this chopping and changing could well have disrupted Dybala.

Rebalancing the team will also have had an effect. Juventus were too open and attacking at the start of the campaign, but five clean sheets in a row are indicative of a new emphasis. That isn’t to say Dybala is being held back, it’s more the case Juventus are now more measured than at the start of the campaign when their attack was often unchained.

We can also mention the last minute penalty misses against Atalanta and Lazio which must have knocked his confidence. Had Dybala converted them, Juventus would have an extra four points right now and be two clear at the top of the table. His participation in Argentina’s troubled qualification for the 2018 World Cup — and all the tension surrounding it — could also have had an impact.

With Dybala though it seems there is more to it. Off-pitch distractions have played a part. In October, La Gazzetta dello Sport reported that the sale of his image rights to a Maltese firm, who sold them on to Puma for 10 years, is behind his decision to change agent and entrust his affairs to his older brother. Dybala’s blacked out boots tell a story of a dispute that has caused considerable bother.

The news of a reconciliation with his girlfriend was also leapt upon, starting a debate about whether Dybala had been suffering from a broken heart. Players are human beings like the rest of us after all. Not robots.

“He’s 24 and we have to accept there will be highs and lows,” Juventus’ vice-president Pavel Nedved said at the Champions League draw on Monday. “One piece of advice I’d like give him is to really concentrate on his football. Make sacrifices in your private life and live the life of a footballer.” Gigi Buffon added that Dybala should “treasure” Nedved’s pearls of wisdom.

Dybala should also be the difference in this Serie A title race particularly with less to separate Juventus and their rivals from a defensive point of view. Up front, it’s difficult to split them as well, as they all have top strikers: Juve have Gonzalo Higuain; Napoli, Dries Mertens; Inter, Mauro Icardi; Roma, Edin Dzeko. Only Juve have a player of Dybala’s potential, though. He just has to fulfil it.