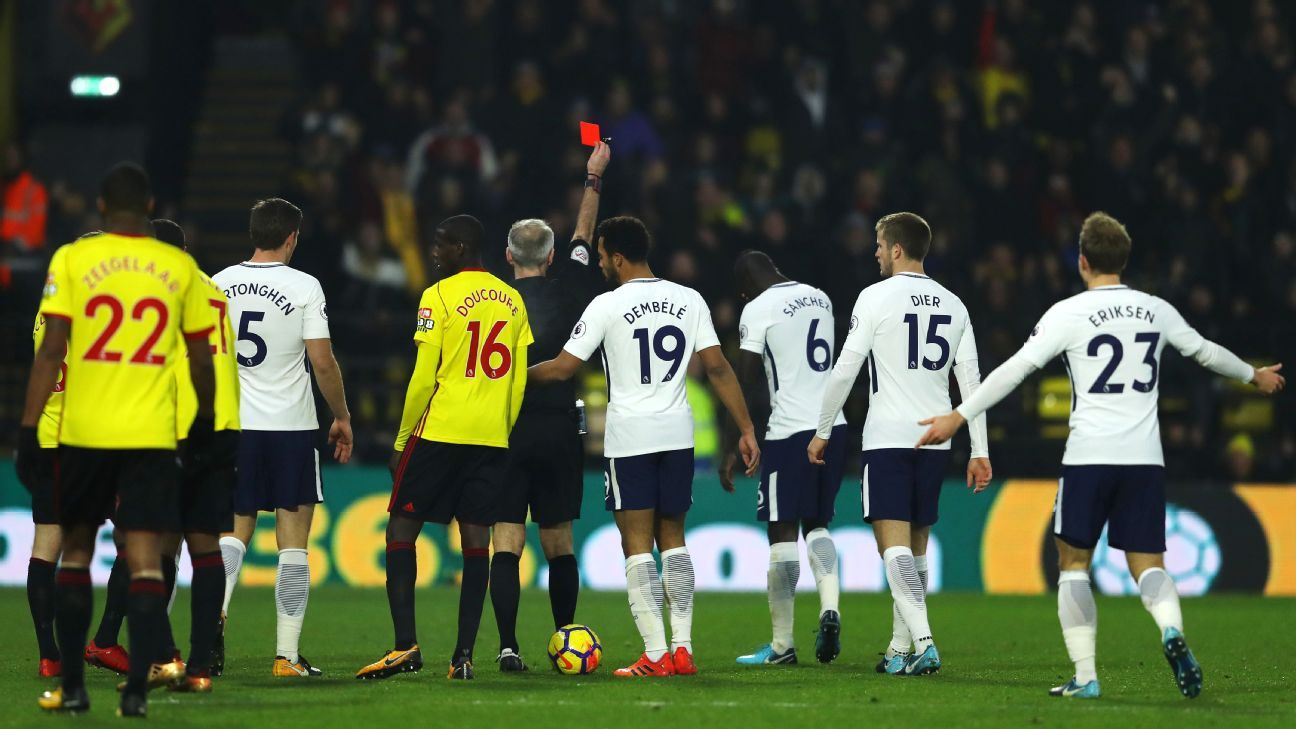 
Davinson Sanchez’s red card forced Tottenham to fight for a 1-1 draw at Watford, toughening their battle to climb back into the Premier League’s top four.

Christian Kabasele headed the Hornets into the early lead, before Son Heung-min Son’s tap-in dragged Spurs level at the break.

Colombia defender Sanchez was rightly dismissed just shy of the hour for clattering Watford forward Richarlison with a forearm to the face.

And 10-man Spurs struggled for fluency for the remainder of the contest, forced to shift Eric Dier into defence and to grind out the point.

Tottenham have now won just once in their last five matches in all competitions, and have still not triumphed on the road since their 4-0 Premier League win at Huddersfield on Sept. 30.

Spurs would have been as frustrated to turn around level at the break as with Sebastian Prodl’s succession of cute fouls stepping high out of defence that stymied the visitors’ possession play.

Harry Kane may feel he ought to have converted an early chance from Kieran Trippier’s low cross, when instead he wound up colliding with the near post.

The opener owed everything to Troy Deeney making a nuisance of himself to distract Ben Davies and create the path to goal for Kabasele’s header.

Richarlison’s dangerous overhead-kick was well blocked by Davies, but Spurs were settling, and finally levelled on 25 minutes.

The roving full-back played Christian Eriksen into space on the right, and the Dane’s drilled cross left Son with the easy finish.

Tottenham’s first meaningful act of the second half proved Sanchez’s forearm smash on Richarlison that earned the defender a deserved red card.

Watford’s Brazilian forward had stood him up and was midway through rounding him on the outside on halfway when Sanchez struck.

A clearly rattled Spurs struggled to contain a Watford side buoyed by their extra man.

Abdoulaye Doucoure thought he had whipped Watford back into the lead with a fine curling strike from 20 yards, but the ball spun back off the inside of the post and bobbled to safety.

The visitors continued to exploit the right flank despite Watford’s numerical advantage, though Trippier overcooked his cross from one fine opening.

The struggling Zeegelaar was rightly booked for tugging back Dele Alli in a cynical move that spoiled Spurs’ threatening counter-attack.

At the death it was Spurs clinging on, with Dier perhaps fortunate not to concede a last-gasp penalty.