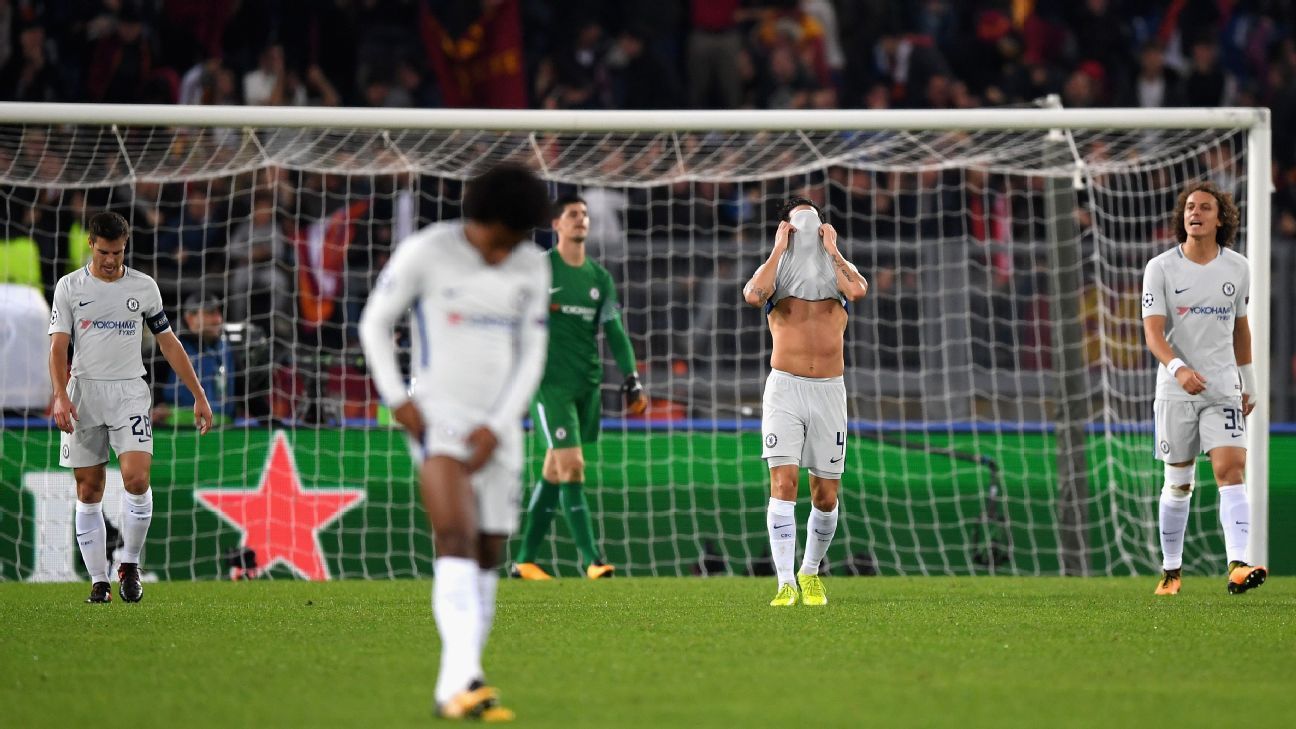 CHELSEA: Chelsea endured a frightful Halloween as Roma went top of Group C with a comprehensive 3-0 win at the Stadio Olimpico courtesy of a Stephan El Shaarawy double.

– Antonio Conte says there is cause for concern, and that he and his players must all take responsibility.

– Thibaut Courtois has said Chelsea can settle for nothing less than victory against Manchester United on Sunday but warned they need to “defend first” if they are to succeed in getting their season back on track.

– Chelsea were again exposed minus N’Golo Kante but their problems in defence ran much deeper than that, Liam Twomey writes.

– WATCH: Is Conte in danger of the sack?

ATLETICO MADRID: Chelsea were at least given something of a reprieve for their heavy loss to Roma as Group C rivals Atletico were again held by 10-man Qarabag.

– Diego Simeone said his team were arm wrestling with destiny after the draw at home to Qarabag left the 2014 and 2016 finalists looking highly unlikely to make the round of 16.

– Simeone was rated just 1/10 and Antoine Griezmann was one of several to get 3/10 in Joseph Walker’s player ratings.

– WATCH: Is this the end of Atletico Madrid?

– Mourinho played down his decision to stop Romelu Lukaku from taking a penalty against Benfica by insisting he “does not see the drama.”

– WATCH: Mourinho with an interview for the ages.

PSG: Layvin Kurzawa scored a second-half hat trick as Paris Saint-Germain advanced from Group B with a 5-0 win over Anderlecht.

BAYERN MUNICH: Bayern ensured their place in the Champions League knockout stage with a 2-1 win away to Celtic.

– Jupp Heynckes hailed the contribution from Javi Martinez as Bayern Munich reached the knockout stages for the 10th consecutive season.

– Celtic have a history of producing a pipeline of talent to the Premier League. Their latest youth products shone brightly in a tight loss to Bayern, Mark Ogden writes.

BARCELONA: Barcelona failed to score away to Olympiakos in Group D, as Ernesto Valverde’s men were held to a 0-0 draw.

–  Ernesto Valverde liked what he saw from his Barcelona players against Olympiakos despite the fact they were held to a goalless draw in Greece.

– Lionel Messi rated 7/10 despite failing to put away any of his four chances in Sam Marsden’s player ratings.

JUVENTUS: Juventus netted a second-half goal to draw 1-1 with Sporting Lisbon and stay in second place.

– Gonzalo Higuain was the pick of a disappointing bunch in Mina Rzouki’s player ratings.

TOTTENHAM: Harry Kane trained outdoors with the Tottenham squad on Tuesday ahead of Wednesday’s Champions League clash with Real Madrid.

– Dele Alli’s talent is unquestionable, but he’s at the point in his career at 21 years old when he needs to add discipline to his skills, Mark Ogden writes.

– Tottenham’s Harry Winks’ calmness and ability to receive the ball are rare traits in a midfielder, never mind a 21-year-old one, Michael Cox writes.

REAL MADRID: Zinedine Zidane has warned Tottenham that the Spanish giants will use the shock defeat to Girona as motivation in Wednesday’s Champions League match.

– Raphael Varane has joined Gareth Bale and Keylor Navas on the injured list for Wednesday’s Champions League fixture against Tottenham, but Isco has been named in the travelling squad despite missing training on Monday.

– Real Madrid have serious ground to make up in La Liga and wrapping up a round-of-16 spot against Spurs would allow them to focus solely on that chase, Rob Train writes.

– This season has been one of struggle, stress and strife for Real Madrid so far. But their capacity to rebound should not be underestimated, Graham Hunter writes.

MAN CITY: Pep Guardiola says he is not interested in playing for a draw away to Napoli despite Manchester City needing only a point to qualify.

– David Silva says he prays he will win the Champions League with Manchester City to complete an incredible medal haul.

– Napoli coach Maurizio Sarri says Pep Guardiola and Manchester City are “the best in Europe” as he seeks a way to beat them in the Champions League.

– WATCH: Expect more of the same from Napoli vs. Man City.

LIVERPOOL: Jurgen Klopp says he is “not sure” whether Philippe Coutinho and Dejan Lovren will be fit to play in Liverpool’s Champions League tie with Maribor.

– It’s make or break for Daniel Sturridge, with this week potentially crucial to his hopes of reclaiming his place at Liverpool, Dave Usher writes.

MLS: Columbus Crew SC got the better of 10-man New York City FC 4-1 in the first leg of their Eastern Conference semifinal on Tuesday night.

– New York City FC manager Patrick Vieira admitted his team “paid the price” for its wastefulness in front of goal in a 4-1 first leg loss to Columbus.

–  Toronto FC striker Jozy Altidore called New York Red Bulls fans “classless,” saying there is “no loyalty anymore” after he and teammate Michael Bradley were booed by fans of their former club on Monday.