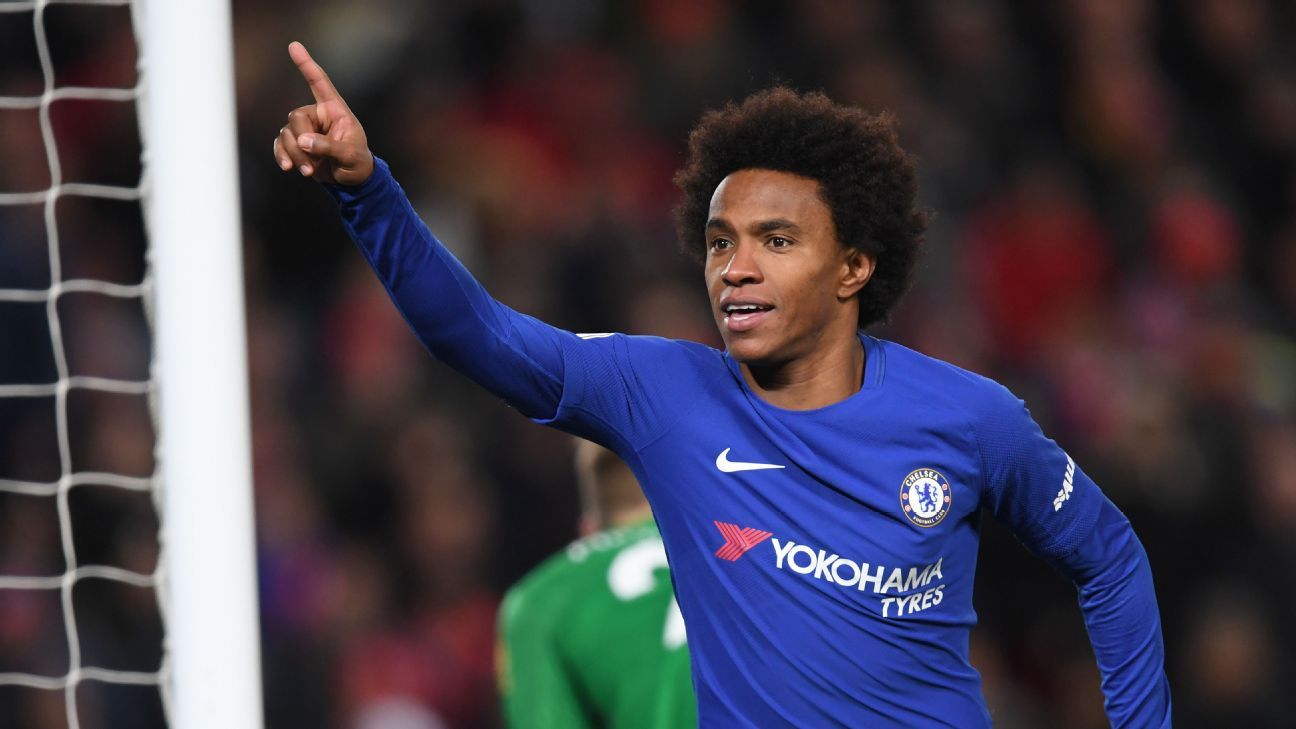 It was reported a couple of weeks ago that Jose Mourinho has asked his scouts to find him a “magician” in January and Chelsea’s wing wizard Willian has emerged as the leading target, according to the Daily Mail.

The Brazilian was in fine form in the Blues’ victory over Huddersfield on Wednesday but has struggled to nail down a starting spot this term. At 29 and with a World Cup just around the corner, it’s no surprise to learn he’s desperate for first-team football.

That could see Manchester United sneak in with a January offer, with Willian previously playing under Mourinho at Stamford Bridge and fitting the manager’s ideal profile for an attacking midfielder.

Chelsea could look to Monaco’s Thomas Lemar and Bayer Leverkusen’s Leon Bailey as potential replacements, while the report adds that United expect to receive bids for the out-of-favour Henrikh Mkhitaryan when the transfer window opens.

With Mkhitaryan seemingly destined to leave Manchester United after failing to impress Mourinho, Mesut Ozil continues to be linked with a move to Old Trafford to fill the gap in the No.10 position.

Despite Barcelona also expressing an interest in the German, it’s thought Ozil would prefer to link up with Mourinho again after working with the Portuguese coach at Real Madrid.

The Daily Mirror says United are ready to cash in on Mkhitaryan to fund Ozil’s wage demands as his contract edges closer to expiring next summer.

Arsenal have offered Ozil £275,000 a week to stay at the Emirates Stadium, but the playmaker is dragging his feet over committing his future to the club. And as for Alexis Sanchez, it appears all hope is lost.

In what could be a huge blow to Liverpool’s transfer plans, Manchester City have given Pep Guardiola the green light to bring in Virgil van Dijk in January, according to The Sun.

The Southampton captain was linked with a £70 million move to Anfield in the summer, but a botched transfer resulted in the Reds making a public apology to their Premier League rivals.

With Liverpool now trailing in the title race, City look set to step in and take advantage of their lofty position by adding Van Dijk to their ranks for the second half of the season.

Guardiola remains adamant that he requires an extra centre-back to maintain the club’s domestic and European challenges, with West Brom’s Jonny Evans still regarded as an alternative should Southampton refuse to play ball over Van Dijk.

– Barcelona are plotting to bring in Daley Blind on a free transfer next summer, reports Marca. The Manchester United defender’s contract expires at the end of the season and he seems likely to make an exit after losing his place in the first team.

– According to TalkSport, Manchester United will duke it out with Juventus for versatile Monaco midfielder Fabinho. The Brazilian has outlined his intention to leave the Ligue 1 club after seeing a host of stars depart in lucrative transfers last summer.

– Ross Barkley to leave Everton in January? No biggie, says Sam Allardyce, as quoted in the Daily Mirror. With Barkley’s contract set to run out in the summer, Allardyce is happy for the Toffees to cash in on the midfielder rather than lose him for nothing at the end of the season. Tottenham are thought to be weighing up an offer.

Man City win UCL opener but will need to eliminate mistakes to finally reach the elusive summit
How a European Super League could happen and spell doom for the Champions League
Transfer Talk – Barcelona lead Juventus in chase for Wolves’ Adama Traore
Tottenham’s squad on Gareth Bale’s first debut in 2007: Where are they now?
Rashford, Fernandes both 9/10 as Man United pour on the style late